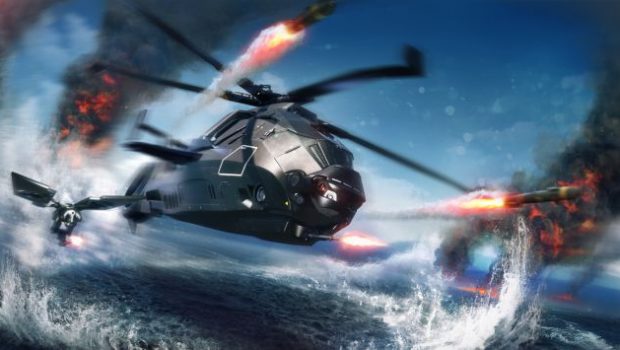 Critical security breach reported. Loss of classified military documents confirmed: The Blueprints for the advanced reconnaissance and attack helicopter RAH-66 Comanche have been leaked. The activity of a whistleblower is most likely. As a reaction, SACEUR has authorized THQ Nordic and Nukklear to continue with the production of “Comanche” as fast as possible to counter any possible threat and to start an “Early Access” program in early 2020.

Wait … the Comanche program is back, although it has been canceled after the rise of modern UAVs? Yep, that’s the background story for the new take on Comanche, that THQ Nordic and developer Nukklear have announced today. After the Iran-US RQ170 incident from December 2011, in which a UAV was hacked and captured through cyberwarfare, the “RAH-66 Comanche” was brought back to life, and received a new role. Next to reconnaissance and air-to-ground combat, the new Comanche also acts as a carrier of a specialized, non-hackable short-range drone, that is designed to operate in high-risk environments. A new era of helicopter warfare is about to begin …

With this setting, the new game – simply called Comanche again and based on the legendary gaming franchise from Novalagic – is set to take off 2020. Comanche will begin its early access campaign and lift off as a modern, team-based online multiplayer helicopter shooter. But that’s not the only new twist. Besides your Comanche, you will also control a small, armed drone for close-quarters combat and special duties. Each Comanche/drone setup will have its own strengths and weaknesses and fulfill an important role in the objective-based team-vs-team encounters.

Early access will allow the developer to create a new, a modern Comanche experience in cooperation with the fans and the community, to ensure the best helicopter warfare game ever. Comanche is bound to release in Q1 2020 on Steam’s early access program. The game is powered by Unreal Engine 4.

About Comanche
Comanche is a team-based online multiplayer helicopter shooter set in the near future, in which you engage with your team of 4 pilots in intense helicopter dogfights and sneaky close-quarter drone combat to attack or defend high-value targets in areas of difficult access. Choose from an array of Comanche and drone configurations, and utilize their strengths to your tactical advantage. By combining the old strengths with a modern multiplayer online shooter gameplay, we bring this franchise into the 21st century.

Features
• Two in one: Control a technically advanced version of the legendary RAH-66 Comanche helicopter in heated dogfights, and step into its accompanying drone for close-quarter combat.
• Many strategic opportunities: Pick one of many Comanche/Drone combinations armed with varied weapons and unique gadgets that compliments your playing style.
• Objective-based multiplayer: Every mission has its own goal – play as a team, to achieve victory.
• Asymmetrical gameplay: Be either on the attacking or the defending side.
• Breachable buildings: Use destructible elements in your environment to catch your opponents off-guard.
• Early access for the players: Comanche will launch in early access to allow the community to participate in the game’s development with their feedback.
• Constant content updates: To expand, modify and improve the game THQ Nordic and Nukklear will continuously provide new exciting content for Comanche and react