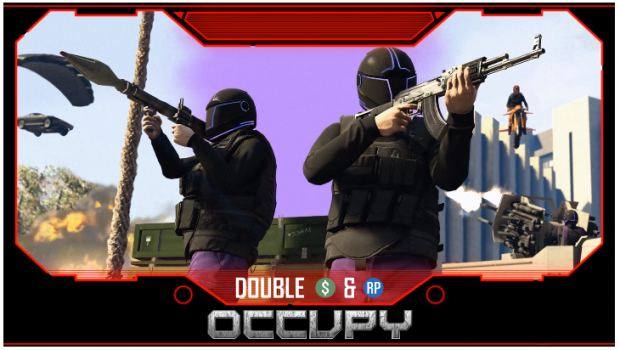 Climb aboard a rocket-propelled flying motorcycle and take control of fiercely-contested capture zones in Occupy, paying out Double GTA$ & RP through March 19th. The more zones you occupy, the faster your score increases, so coordinate with your team to seize and hold down as many capture points as you can.

Enter the Bunker Series corona on your map (or launch any Bunker Adversary Mode via the in-game menu) and earn Double GTA$ & RP for dealing out some subterranean damage in:

And tune in tomorrow Wednesday March 14 at 5pm Eastern for the official Rockstar live stream where we’ll be playing this week’s double cash and RP modes and much more with very special guests The Martinez Brothers and friends. Make sure you’re following and subscribed to Rockstar Games on Facebook, YouTube and Twitch for go-live notifications.

If you’ve ever dreamed of commanding a vicious team of mercenaries or issuing an orbital strike from the comfort of your own underground lair, Maze Bank Foreclosures is here to help with deep discounts on select Facilities through March 19th. You can also find deals on popular Aircraft, Super cars, Weaponized Vehicles and more: