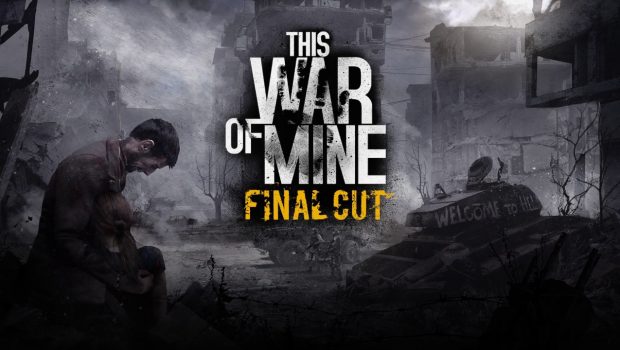 This War Of Mine: Final Cut PC Game Review

Summary: The impact of war is depicted in gut wrenching fashion.

This War Of Mine has been out for some time now, I’d heard a lot about it and been quite interested in it… but it wasn’t until the Final Cut was released that I got to experience the horrors of war for myself (albeit still in the very safe, protected platform of a game). 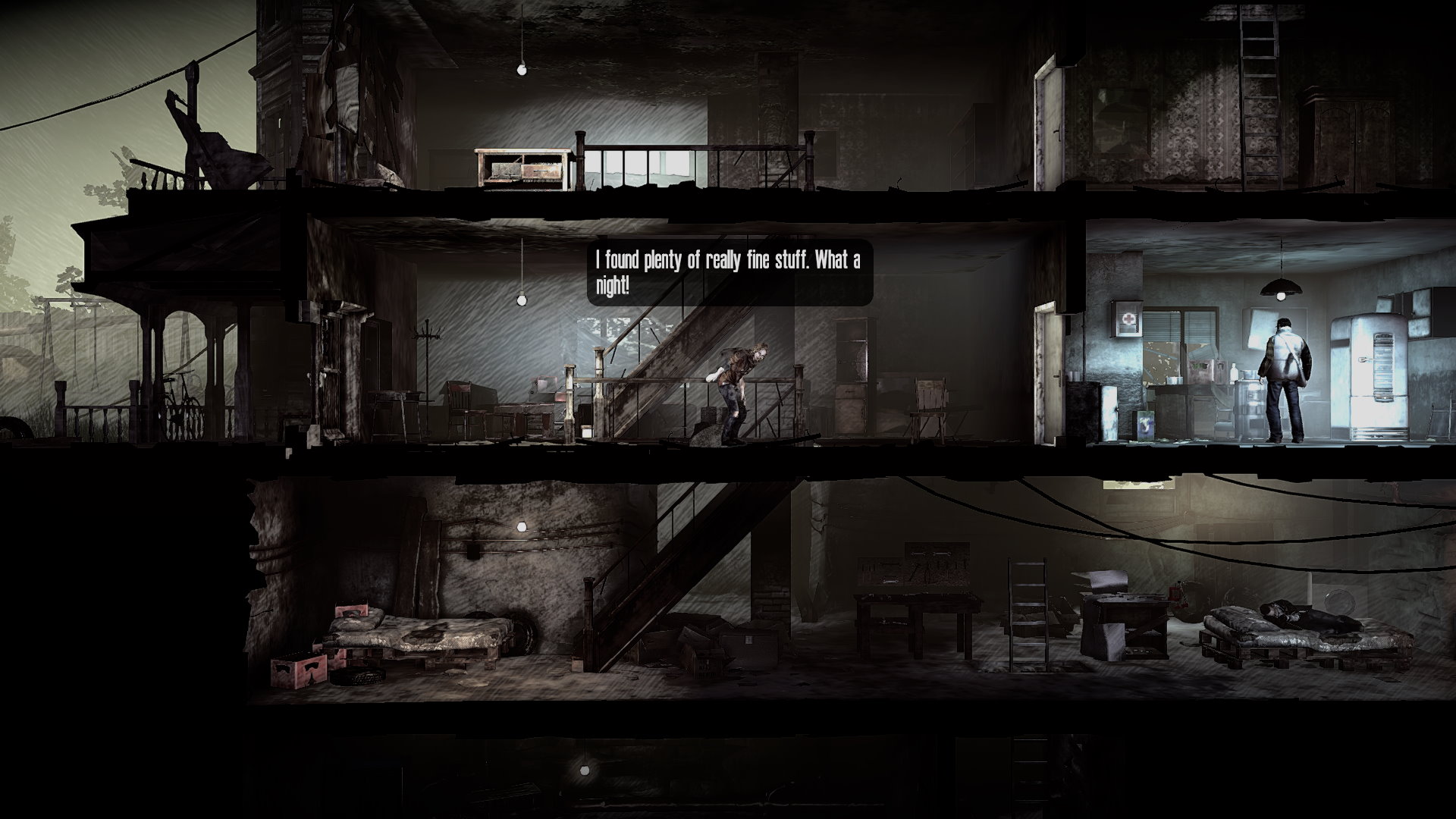 The obvious thing to state is that This War Of Mine takes a different approach to most other war games. You aren’t on the front line, you aren’t a “hero” in the commonly used sense of the word. You don’t have an amazing arsenal at your fingertips. You have a roof over your head, you have a couple of companions and a desire to survive… to start with. 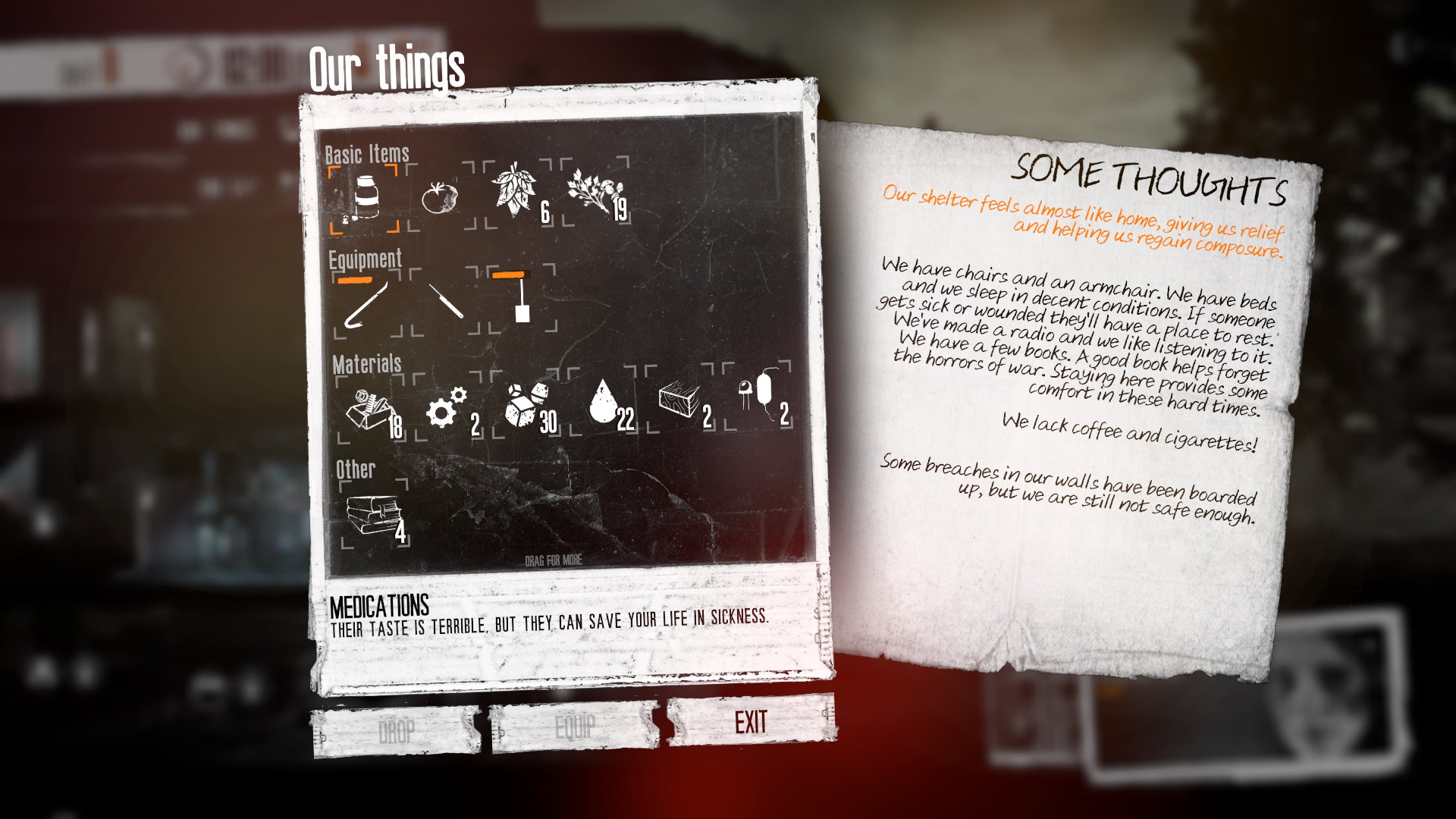 Your little group begins with a degree of optimism, you have shelter, you should be ok for food for a while, reports suggest maybe the fighting has an end in sight. Each successive day though, your supplies change, the weather shifts, scavengers try and raid your home.. any number of things can happen and how you deal with them will ultimately decide if you succeed or fail. If you get attached to a character you may well find they die the next moment… this is George R. R. Martin level character safety. 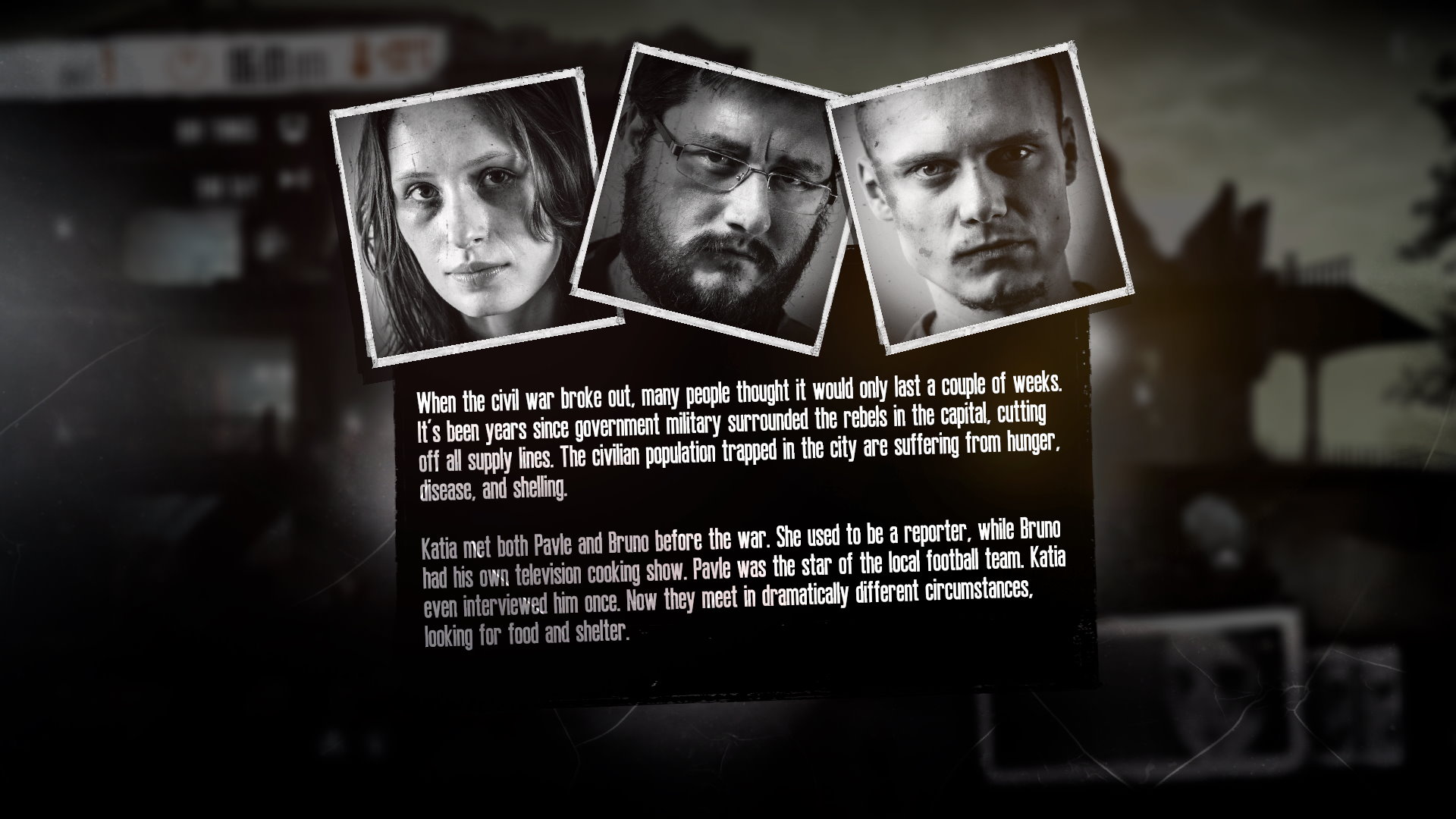 The basic idea is you need to secure your home and try and scavenge or barter for supplies to see you through till the war is over. At first it seems easy enough, you find enough bits and pieces to be able to make some “comforts”, a bed, a chair… it’s looking ok. Then you start having trouble finding supplies, either you’ve already grabbed all you can from a location or perhaps some hostile people move in and threaten you if you don’t leave. There might be a location that is full of useful items, but to obtain them you’d have to attack the people living there… could you do that? Could you live with yourself knowing you harmed or even killed someone just to get a few more items to make your life more bearable? 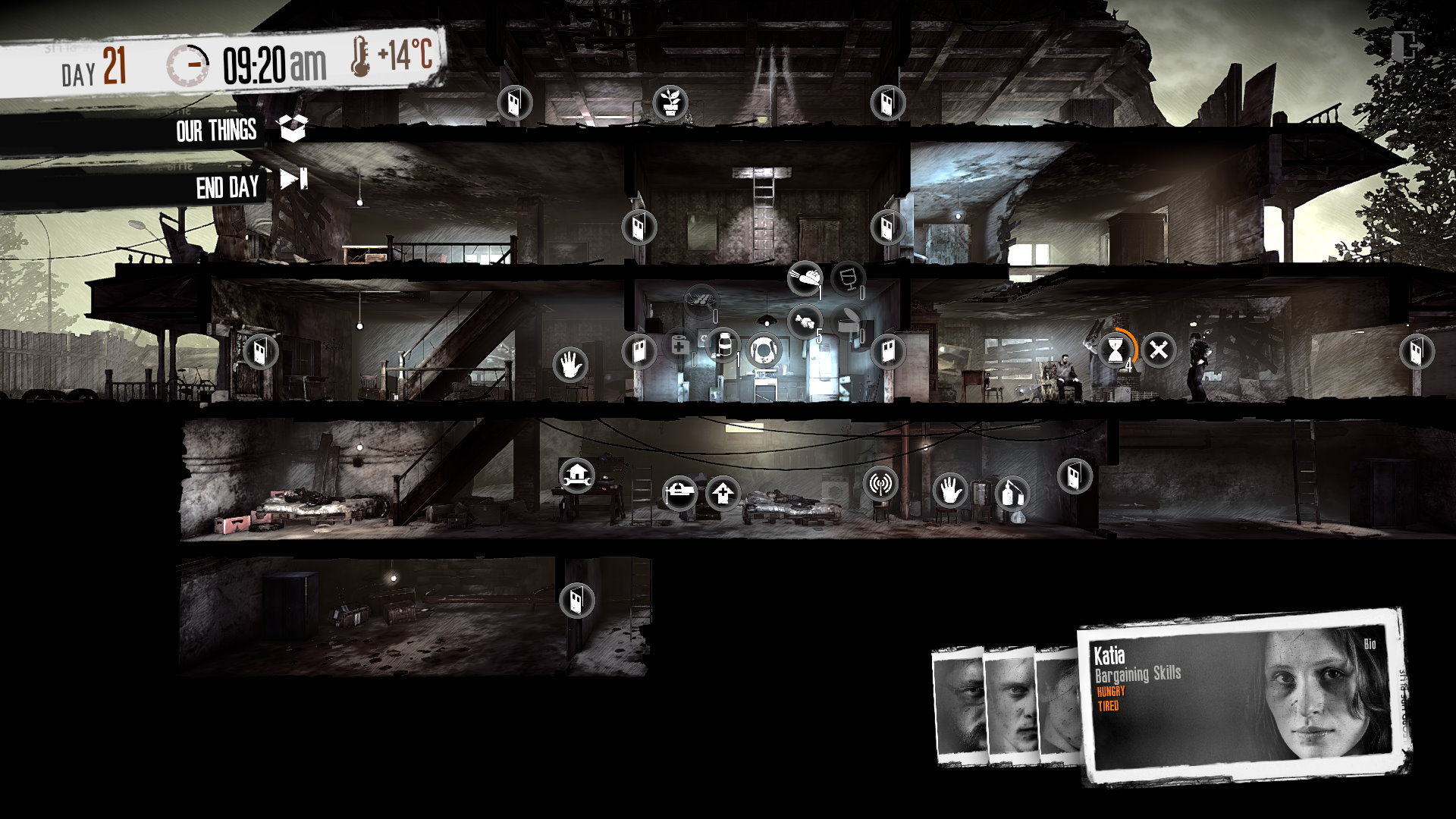 That is kind of one of the big over arching questions, how far will you go to make sure you survive? Will you try and make do in order to not harm others or will you take whatever you want from who ever you want because you will survive this situation at all costs? It gives the game the depth of a psychological study on top of the basic survival mechanic. The fact that you aren’t fending off zombies or some other make believe enemy, makes the game even more compelling and harrowing. 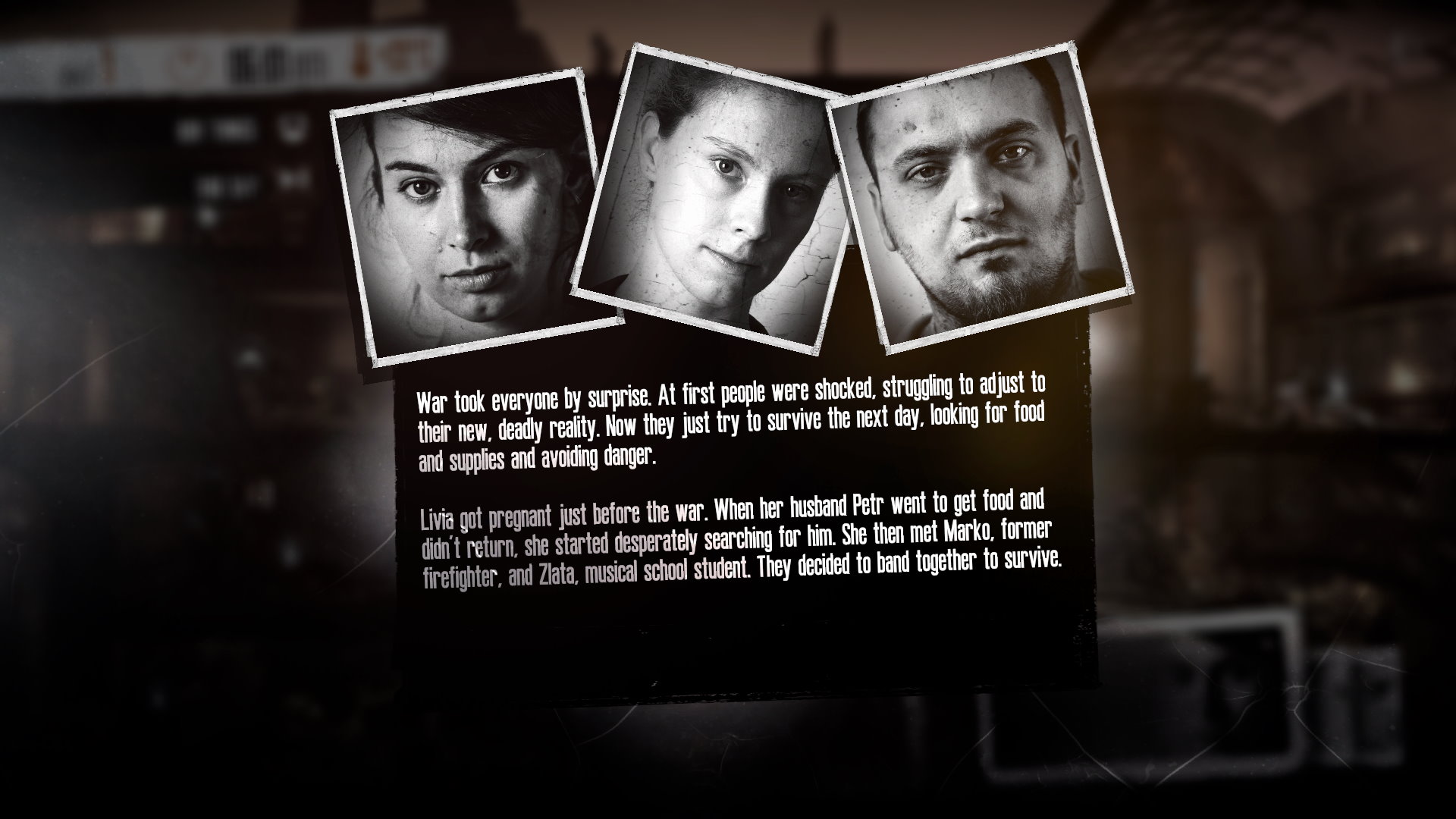 My main play through seemed to be going ok… I was even saving up materials to build a heater which seemed to be the next big thing I needed… but then the winter really hit and even though I managed to get my heater built… keeping it fueled was a big challenge and things just started to fall apart, people got sick, depression set in and my little “family” died. You then get presented with a little wrap up of what happened to each of the characters… because you know, you didn’t feel bad enough that you had failed them, you have to be told exactly how.

But all of these experiences, the good and the bad, are massively important! It was horrible to read of how I failed my group, but it also motivated me to try again and to try and do better (though I still refuse to harm others just to improve my standing). The game is a compelling piece of story telling and a wonderful exploration of empathy. For the price it is… I wouldn’t even say wait for a sale, I’d just say buy this game… it will challenge you, it will pull at your heart strings… but I think, especially in this day and age, we need games like this to remind us to care for one another and to point out what is really important.