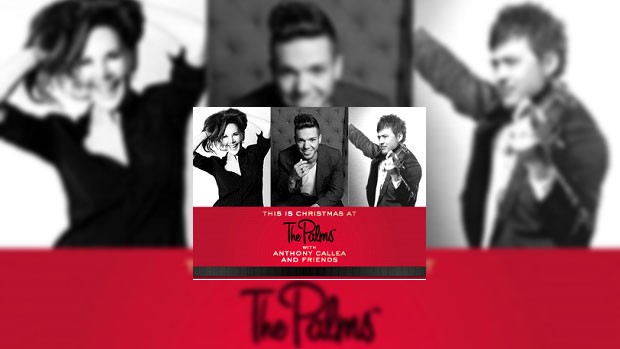 THIS IS CHRSITMAS AT THE PALMS – Anthea Callea, Rhonda Burchmore , Patrick Roberts

Join one of Australia’s finest vocalists and his special guests at a sparkling show to celebrate the festive season at The Palms at Crown Melbourne.

Aria Award winner and multi platinum artist Anthony Callea and his band will perform favourite Christmas classics, accompanied by spectacular dancers to celebrate and reminisce through the music that we all love, on The Palms stage.

Christmas classics and soaring ballads are a great fit for the powerful voice of Anthony Callea, whose 2013 album This Is Christmas charted in ARIA’s top 40 and featured Silent Night and Amazing Grace. The album celebrated his 10th anniversary performance at Melbourne’s Carols by Candlelight.

Anthony Callea is a passionate supporter of charities and recently performed at The Million Dollar Lunch at the Palladium at Crown, which raised nearly $2million for the Children’s Cancer Foundation.

Book a booth or lamp-lit balcony table and enjoy the intimate atmosphere of the state-of-the-art cabaret venue as Anthony Callea and his guests add excitement to your end-of-year celebrations.

Popular performer Rhonda Burchmore’s guest appearance at This Is Christmas at The Palms comes hot on the heels of her lead role in The Production Company’s season of Jerry’s Girls in Melbourne.

Rhonda Burchmore was awarded the OAM in 2014 for her service to the performing arts and community. In 2002 and 2012 Rhonda won Female Vocal Performer of the Year at the MO Awards and ACE (Australian Club Entertainment) Awards.

Highlights in her 30 years in showbiz include lead roles in musical theatre productions Mamma Mia!, Calendar Girls and Guys & Dolls, television credits with Spicks and Specks, Hey Hey It’s Saturday and Carols by Candlelight, and the recording of five albums.

Also making a special guest appearance at This Is Christmas at The Palms is internationally acclaimed violinist Patrick Roberts, whose flamboyant style fuses contemporary with the classics.

Patrick recently played at the Palladium at Crown as opening act with Fashion Aid, and other headline shows this year have taken him across the seas to perform on cruise liners. The proceeds of Patrick’s most recent album, Vision, were donated to Vision Australia.

Reserve your seats now and see Anthony and his guests perform the Christmas classics live at This Is Christmas at The Palms.