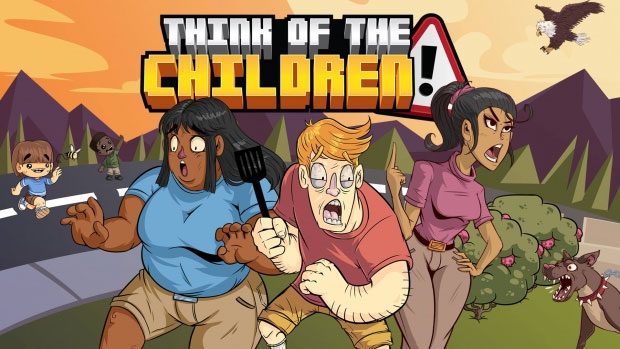 Think of the Children! Review

Summary: Think of the Children! is a hilarious party game that is simple enough for anyone to pick up and join in

One of my favourite things about this Indie game renaissance period that we seem to be going through at the moment is the revitalisation of the local co-op multiplayer party game. The past few years have given us some absolute killer cooperative party games like Overcooked and Lovers in a Dangerous Space Time, and now Brisbane-based Jammed Up Studios have delivered a classic that needs to be part of your next gaming social gathering: Think of the Children!. 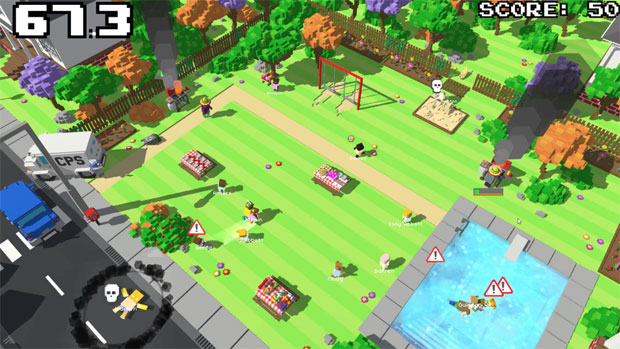 As mentioned above, Think of the Children! is a local co-op multiplayer game where up to four players take on the role of parents attempting to supervise a crowd of children in a variety of hazardous situations, whilst also completing a number of parenting tasks. For example, the first level is based on a child’s birthday party in the park. To get the best score, you need to set the table, tend the barbecue and set up the entertainment, all whilst making sure your horde of children don’t drown in the nearby pool. Or get hit by a car. Or get eaten by a dog. Or eat poisonous berries. Or get taken away by the child protective services van patrolling the area.

It may sound like a lot to keep track of, but as with Overcooked and Lovers in a Dangerous Space Time, the fun in Think of the Children! is in delegating roles with your friends to successfully complete the frantic tasks at hand in order to achieve the best score. And actually completing these tasks is relatively straightforward. You simply need to run over and pick up your children before they swallow the poison berry, then you can toss them away from any hazards and go back to your parenting tasks for a few moments, before the children recover and find something else more dangerous to distract themselves with. It’s an absurd, slightly morbid concept for a game, but the frantic co-op gameplay works really well in party scenarios. 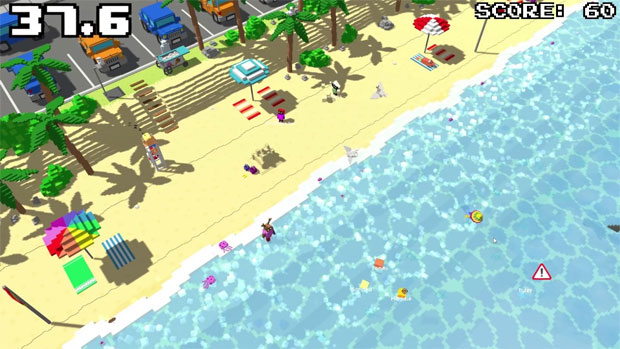 The colourful, blocky visual design also goes a long way to take most of the nastiness out of, you know… children being electrocuted. Think of the Children! has a voxel-esque, cartoon aesthetic that looks absolutely gorgeous, particularly in highly detailed environments such as the underwater stage. The visual design is also effective in communicating potential dangers and tasks that need to be completed, and works well to make each level feel unique and interesting. Adding to this, the boppy, electro-chiptune music perfectly matches the silliness unfolding onscreen and adds another layer of character to the environments. 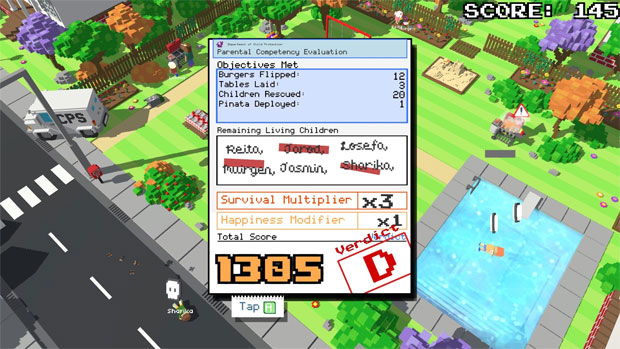 Silliness is a major factor that seeps into every aspect of Think of The Children!, including the surprisingly compelling story mode. Basically, you and your friends are on trial for severe child endangerment and neglect, and your performance in each of the stages is being used against you as evidence. Granted, there isn’t much of a ‘story’ to tell, but there is an astonishing amount of absurd, dumb humour packed into each of these segments that you’ll want to take it all in and look forward to whatever comes next. Also worth noting are the frequent hilarious references to Australian culture. I can’t think of any other game that discusses sticking googly eyes on the back of your helmet to prevent swooping magpies.

As much fun as the story mode is, one of the negative aspects of Think of the Children! is just how vital it is to play with friends. The game just doesn’t scale its difficulty enough to make playing alone viable. It took me a number of attempts to clear the first level with a passing grade when I was playing solo, but my friend and I perfected it on our second attempt when we played together. Also, the lack of online multiplayer means you’ll only get to experience this one when your friends are actually on the couch next to you, which is really the best way to play these types of games.

Another thing I found disappointing in Think of the Children! is the lack of different game modes. Each of the dozen or so levels have their own unique set of goals and gameplay mechanics that are a tonne of fun the first few times you play them, but most levels can be perfected after a few rounds if you’ve got strong group coordination, and you’ll probably get sick of playing them after you’ve aced them. That being said, as each level features varied and unique game mechanics, you’re more likely to play for longer sessions without getting bored. 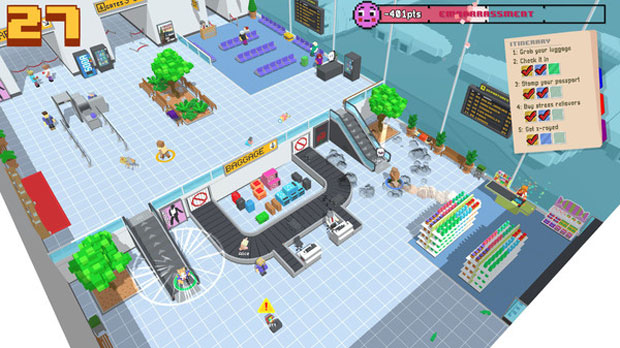 Completing a level unlocks a new item you can use to customise your character and the children you’re supposed to be supervising. Each level has a number of items to unlock depending on your grade at the end of the round, so there’s plenty of replayability on offer if you want to unlock everything. There’s heaps of customisation options available and creating a family of wierdos is always fun.

In case you can’t tell, I love Think of the Children!. It’s a hilarious party game that is simple enough for anyone to pick up and join in, but also offers a decent challenge to those looking to strain their friendship. The colourful visuals and great music work well to create a fun, frantic multiplayer experience that is a joy to play with a few mates on the couch. It’s also responsible for making me yell “Oh no, my clown-child is teasing the drop bear again!”, and that alone has earned it a permanent spot on my party game playlist. 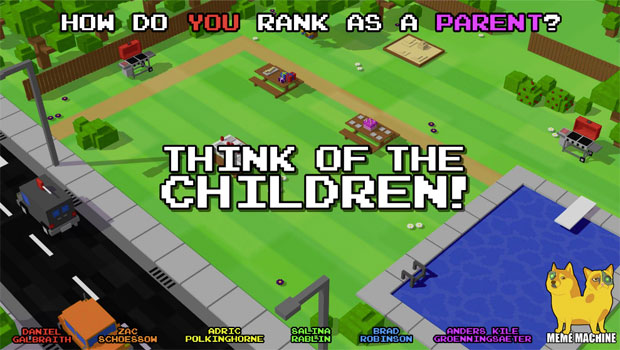