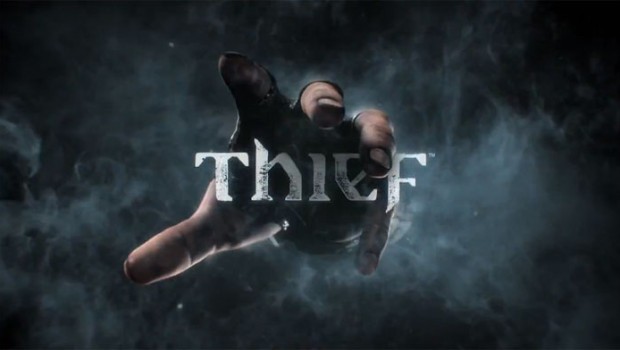 Summary: All in all, Thief successfully ticks the right boxes on the PlayStation 4, although it's not a totally next-gen experience.

Welcome back to the cutthroat world of Garrett, a master thief who has become embroiled in a dark conspiracy that is ignited by an occult ceremony which serves as the catalyst to this immersive story.

Thief is developed by Eidos Montreal and just like the latest Tomb Raider game, Thief is a reimagining of the previous games which takes this franchise to whole new next-gen level. The game also supports both the novice and professional gamer with three modes of difficulty that include Rogue, Thief, Master and Customisation. Another interesting element of the game is the customisable HUD which allows you to tweak what you want displayed.

For those sadists, the Customisation Mode allows users to really tweak the difficulty of the game which also boasts a permadeath mode. This really increases the stress level of the gamer as every action must be monitored or you’ll be meeting your maker in no time. As to the maker of Thief itself, it is directed by French-Canadian Nicolas Cantin and ironically it’s been 16 years since Thief first graced the PC. 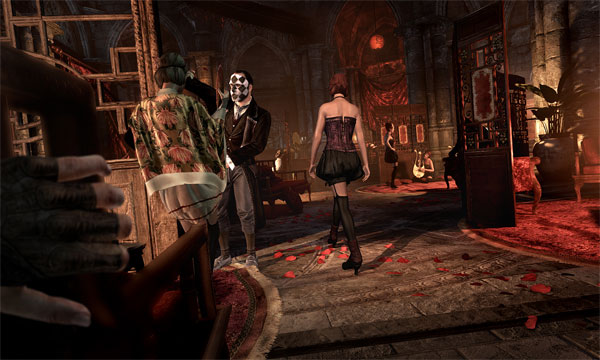 The story of Thief is as rich and colourful as the gameplay itself which is set in a very troubled city that is an amalgam of Victorian inspired buildings meets the world of Streampunk with a perhaps a of magic. The first level serves as a tutorial which not only teaches the player the control systems of Thief but lays the foundation of the story. As Garrett and his unwilling prodigy Erin move across the rooftops, they have been sent by Basso, an “underground” businessman to steal a precious item. However as they banter between each other, Garrett notices that Erin has changed and become a harder and more violent young woman who is quite reckless with her thief skills.

As a result Garret steals Erin’s blackjack which is a club/climbing tool which he believes will make her think first before acting. When they do reach their intended destination, they discover that a dark occult ceremony has commenced and Garrett informs Erin that the mission is cancelled. The headstrong Erin defies Garrett and when she attempts to finish Basso’s mission, she causes a chain reaction which draws both thieves into the ceremony’s unholy vortex.

Fast forward to a year later and Garrett returns to the city where he seeks the Queen of Beggars for answers and discovers that he has been missing for all this time. To compound the situation, it appears that Erin is dead and that the city is now under the ruthless control of the Baron and the insidious Thief Taker General. Although Garrett has returned, his world is vastly different and he is unwittingly drawn into this dark mystery with many questions and very few answers. 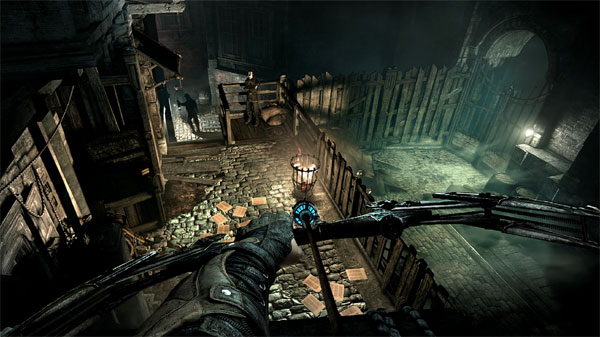 The gameplay of Thief is in the style of a first person shooter where you interact with just about everything in this mode and works quite well. However there are a few places where the game does switch to a third person mode such as when you’re climbing the sides of buildings or other precariously placed areas. This transition from first person to third is fortunately quite smooth. The gaming engine of Thief also gives the player a variety of ways to complete missions with different pathways and combat options.

When you are exploring the world of Thief, Garrett interacts with environment quite flawlessly and as you run across the rooftops, the game has this real Parkour feel behind it. The controls are well mapped but did take me around an hour or so to master them because I was not familiar with the layout. It’s not bad but just different. The game also uses the DualShock 4 controller in terms of the touch pad to navigate through items and the light which is used to inform the player how hidden they are. 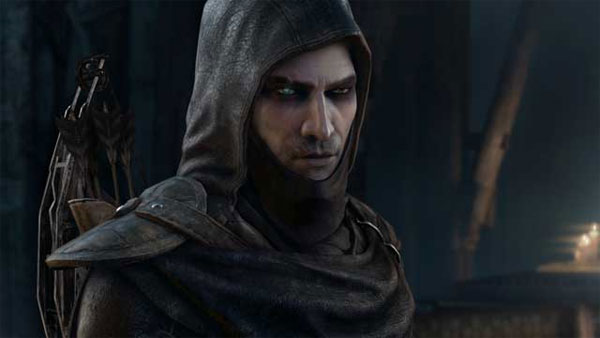 Apart from climbing ropes, running on roof tops, Garrett must also employ his thief skills to pick locks, disarm traps and find secret levers which really enhances the gameplay. Nothing is more fun than searching for a hidden lever on a painting as you to attempt to find it before the guards find you. The game also supports a skill tree system that include upgrades to dexterity, sense, combat, speed, efficiency, marksmen and stealth. By upgrading these skills, it increases your overall ability. Another interesting element of the game is the focus mode which basically transforms your vision into something akin to Batman’s detective vision which highlights traps and other objects that you can interact with.

Unlike Arkham Asylum, this is limited but can be recharged by finding a flowering poppy. Garret also has access to a small arsenal of arrows to be used with his powerful collapsible compound bow. For example, you may have rope arrows to reach destinations that would make climbing impossible or water arrows to extinguish flames. Another useful arrow for stealth is the choke arrow which forces enemies to become incapacitated from coughing or the blunt arrow for distraction. These are also vital elements to the gameplay. Garrett can also upgrade other items such as his bow, blackjack or lock picking tools to improve his chances of success. 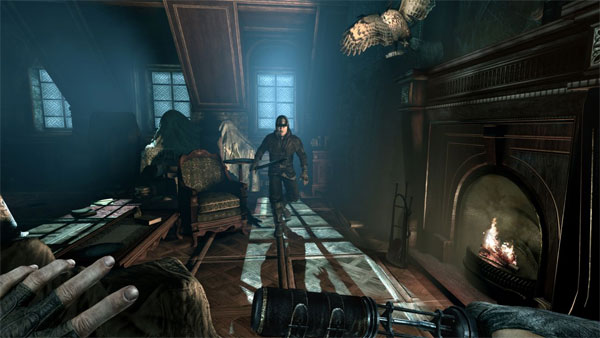 There are a variety of different missions in the game but like most, they require the player to use their thieving skills to “steal” something and when it comes to combat, the game does reward stealth opposed to direct fighting. With that said, combat is quite clunky in the game but once again this is a game of stealth which the game heavily points you in that direction. To assist with your stealth, there is a light meter available to the player which informs you how hidden you are in the shadows and even though at times you are completely hidden and depending on difficulty, the guards can sometimes find you, especially if you get greedy and try to pick pocket them.

When you do need to go home and lick your wounds, Garrett has access to his Clock Tower which also allows you to stock up on goods and lock away the precious items that you have found on your travels. Although no multiplayer, the game does offer the player access to online leaderboards and given the gameplay, Thief is not a game that would work well as a multiplayer title. Add in some challenge stages and Thief is a fun single-player with an interesting story, fun characters and a relatively sturdy gaming engine apart from combat. 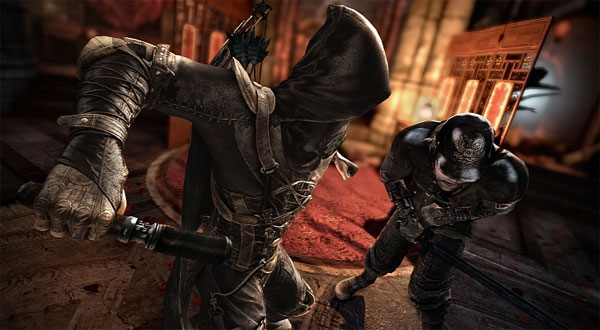 Graphically Thief looks quite detailed on the PlayStation 4 that not only supports a very complex level design but makes great use of lightning and high resolution textures. The game itself uses the powerful Unreal Engine 3 that makes the entire world look quite realistic. Characters are detailed and move with a human-like grace in the game. I also love the use of particle effects in the game. Even though the game is a first person title, you do see the hands and arms of Garret and the texture detail here is extremely detailed. For the most part, the game keeps a constant FPS but at times, there was some slow down but this is quite minimal. The biggest let down with the graphics are probably the cinematics that seem to drop in resolution and does jar a little from the high definition gameplay. Nonetheless the cutscenes are still a joy to watch. 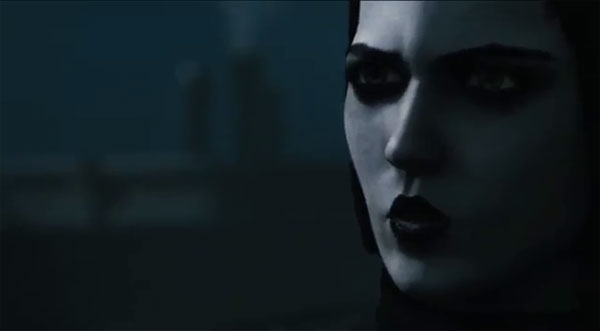 The developers should also be commended with the audio track and this is one game that makes full use of surround sound, especially the background ambience. The voice acting is quite professional, although there are a few voices that do sound a little forced and contrived but thankfully not Garrett who is played exceptionally well by Romano Orzari. In terms of sound or audio, one level was really frustrating as you were exploring an ancient area that was part of a brothel and needless to say the noises of some “client” getting lashed by a whip was really annoying. Apart from that all the other sound effects work in conjunction with the gameplay.

In conclusion, Thief is a game that totally focuses on stealth and contains a relatively sturdy gaming engine with some truly beautiful graphics. One gripe with the gameplay is the clunky combat system and thankfully this can be avoided for the most part and even when you do fight, it is still a satisfying experience for a thief that does not kill. All in all, Thief successfully ticks the right boxes on the PlayStation 4, although it’s not a totally next-gen experience.