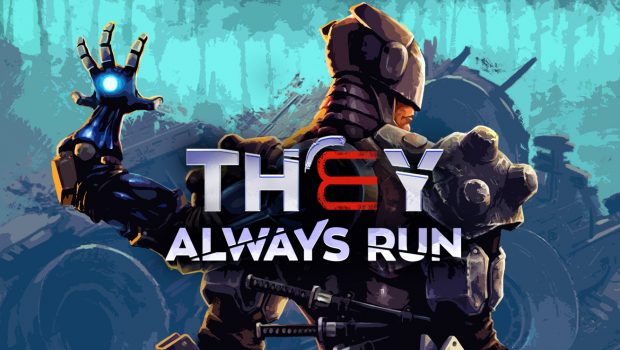 Summary: Overall They always run is an intriguing example on modern 2-D platformers. Whilst it has minor problems with some of the platforming it does not take away from the atmosphere and aesthetic this game exudes. Whilst not having the most compelling story being very formulaic and told through long text breaks the combat and graphics more than make up for it.

They Always run is Action Platformer mixed with a standard 2-D Hack and Slash. Think Metroid mixed with Ninja Gaiden for the NES but with the visuals of a game like Blackthorne. Can this game deliver on those illustrious comparisons or will it be one jump and one arm too far?

When everyone you love is killed, what is there to do? Of course the correct answer is to go on a suicidal campaign of revenge. But of course you can not only do this as you would become very poor very quickly, so why not whilst you are at it capture and kill other Bounty targets that will hopefully lead you to the person responsible for your trauma.

Who needs two arms when you can have THREE??

What makes your character unique is that he possesses a third arm, now this is not just any old arm this arm becomes crucial to your abilities to defeat enemies and access areas normally close off to us normal two armed folk. Your first use for the arm will be to counter enemy attacks, especially those carrying futuristic riot shields. Allowing you to unleash a fury of stabs to the now defenseless enemy. As you progress through the levels the need for this third arm battering ram becomes more and more important as you will find yourself quickly surrounded and in need of countermeasures of a way out of here.

Upgrades can be bought with money collected from taking down enemies and defeating Wanted criminals. The most important upgrade in my opinion is the grappling hook that allows you to grab ledges and pipes normally inaccessible and allows you to pull and drag enemies helping you to single out enemies rather than fighting in a huddle. 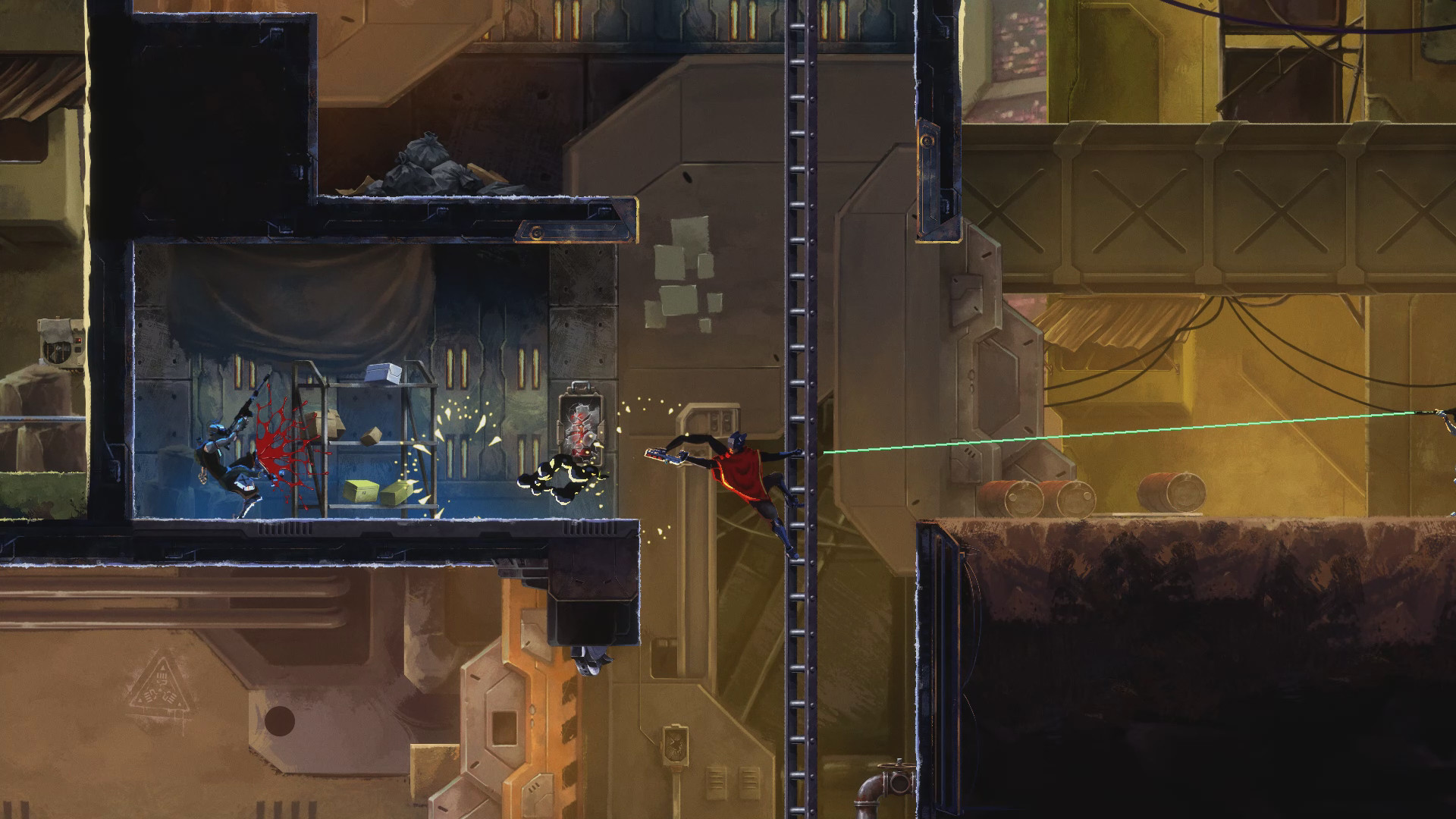 Now we come onto one of the most polarising aspects for me, whilst the designs for levels are nothing too innovative what is there is executed well for a design and look standpoint. It is only when you get to play them does this game struggle. There will be a few times during your gameplay where you will be left dumbfounded as to why your character has seemingly lost the ability to grab ledges and pipes that you clearly should have reached. This is due to missing or obstructed hit boxes. Whilst this is frustrating I am happy to announce that Alawar (Game Devs) have responded to the issues and have set about releasing patches to fix the issues with hitboxes. Whilst it is annoying for the gamer that these issues are here it is very pleasing to see a developer coming back and cleaning up mistakes and bugs.

Now back to some happier positives the overall art style and direction for this game is outstanding, like I said right at the start of this review this game art style is very similar to the cinematic 16-bit platformers like Blackthorne and Prince of Persia, whilst not as clunky as those early games. This game has full frames of animation that has been hand done frame by frame. This helps create a sense of full movement and an almost cartoon-like full motion effect.

Added to that are the very detailed background and set pieces everything has an organic flow that really helps with continuing pace of the action in game. 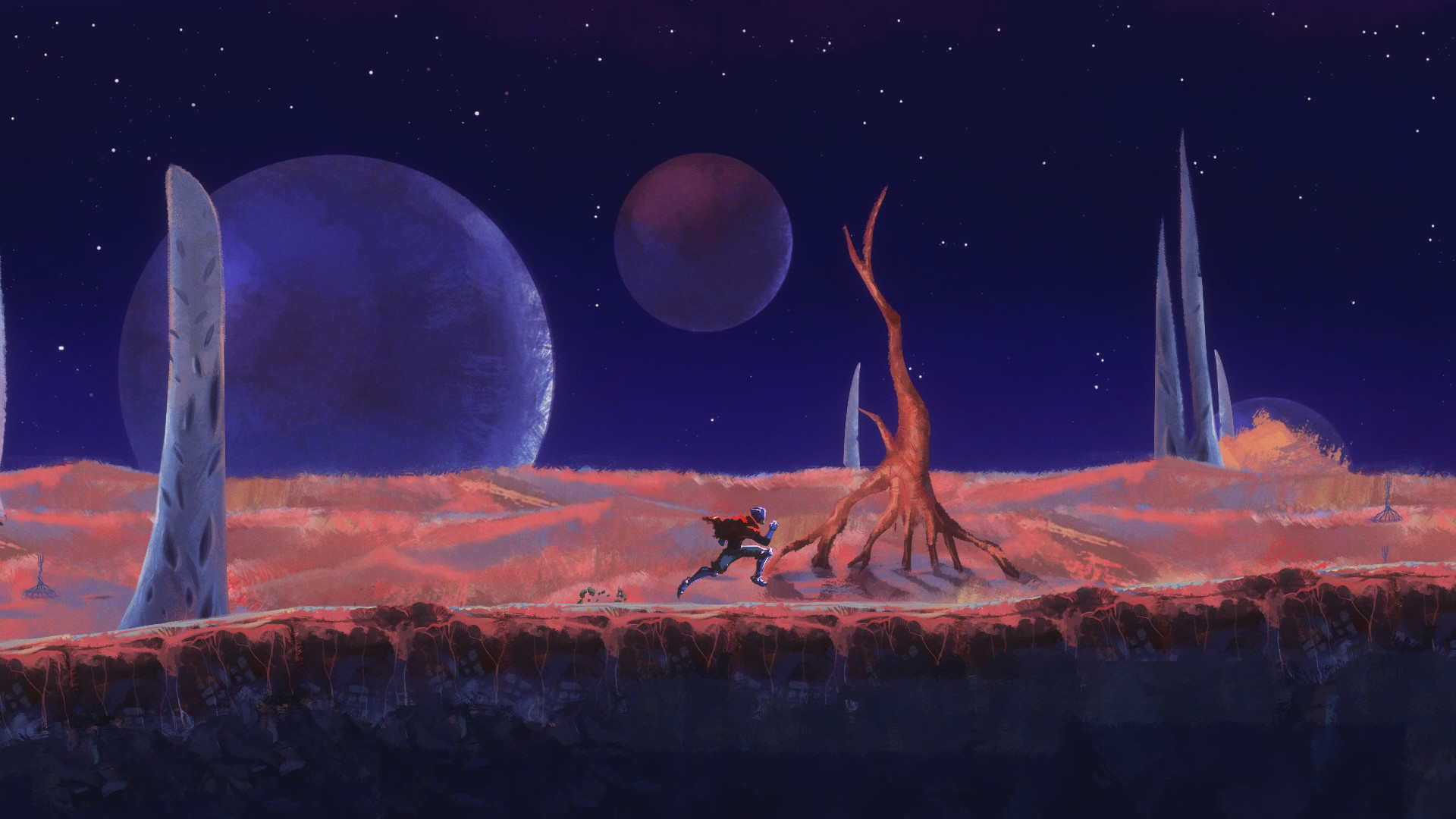 Overall They always run is an intriguing example on modern 2-D platformers. Whilst it has minor problems with some of the platforming it does not take away from the atmosphere and aesthetic this game exudes. Whilst not having the most compelling story being very formulaic and told through long text breaks the combat and graphics more than make up for it.