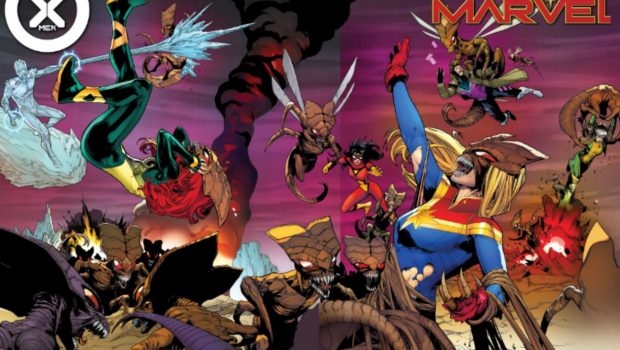 THE X-MEN AND CAPTAIN MARVEL JOIN FORCES TO PUT AN END TO MARVEL’S MOST TERRIFYING ALIEN RACE IN REVENGE OF THE BROOD!

The parasitic predators known as the Brood have returned to the Marvel Universe in a big way and their latest plan to infect the cosmos will be both Captain Marvel and the X-Men’s biggest nightmare!

Currently unfolding in the pages of Kelly Thompson’s acclaimed run of CAPTAIN MARVEL, Carol Danvers has taken to the stars to answer a distress call, only to confront horrors at the hands of her vengeful old enemies—the Brood! Luckily for Captain Marvel, she won’t be alone! Not only will the story arc guest-star various X-Men including Rogue, Gambit, and Wolverine, but Gerry Duggan’s ongoing X-MEN title will connect with CAPTAIN MARVEL starting in February’s X-MEN #19. Joined by artist Stefano Caselli, the arc will see the X-Men realizing that despite their efforts, the Brood are still a major threat that needs to be put down quickly and permanently.

Titled “Revenge of the Brood” and “Lord of the Brood,” both arcs represent a reunion of sorts as Captain Marvel and the X-Men fought alongside eachother in the original Brood Saga by Chris Claremont, Dave Cockrum and Paul Smith. The iconic adventure changed Captain Marvel forever as she unlocked her Binary form and saw the X-Men make some of their most intense sacrifices. This latest war with the Brood will pack the same emotional punch and once again, neither parties will walk away unscathed!

In “Lord of the Brood,” the X-Men get a distress call from deep space and find that the galaxy’s Brood problem is not as solved as they’d thought! When the X-Men’s close friend Broo became the Brood King, he gained the ability to control the savage alien race he was both a part of and so different from. Now he is experiencing his own nightmare scenario – the Brood are killing his friends, and there is nothing he can do to stop it! Rogue Brood factions have begun running wild, and it’s up to the X-Men to get to the bottom of why!

In “Revenge of the Brood,” Carol Danvers is on an X-press elevator to her own personal hell! And the Brood Empress is determined to ensure the Captain and all of her friends make it to their destination. Rescuing their team and getting out alive has always been the goal, but the odds are more deeply stacked against her team than Carol can even imagine. Overwhelmed and trapped in the Brood’s backyard, Captain Marvel and her team are forced to sacrifice one of their own. But the Brood let Carol through their clutches once before, and in so doing, created one of their worst enemies. They won’t make that mistake again.

To mark the occasion, upcoming issues of both series will have one giant connecting cover by Juan Frigeri that will run on CAPTAIN MARVEL #46-48 and X-MEN #19-21. This new Captain Marvel/X-Men epic will then conclude in CAPTAIN MARVEL #49 where both stories will converge in a galaxy-changing finale!

“I have been wanting to write the Brood and have some X-Men guest stars since we started this CAPTAIN MARVEL run in 2019!” Thompson told CBR in an recent interview. “The Brood were off the table for a long time due to some changes to their role in the Marvel Universe — and that was true, a little, of the X-Men too. So it’s really exciting to have all of it coming together finally in one story — our biggest Captain Marvel story yet — feels right, y’know? It especially feels right because The Brood are truly [some] of Carol’s greatest nemeses. [Considering] how we’ve been pushing on her powers, her role in the Marvel Universe, and her commitment to being a hero –it feels like things all coming to a head.”

“The Brood are back, and they’re worse than ever,” Duggan explained. “The X-Men must make some hard choices about their pest control services, and what about Broo, the former student at the X-Mansion, we thought he was the Lord Of The Brood? The problems are galactic and it’s all hands on deck including Captain Marvel, Rogue, Gambit and Polaris. Check for parasites.”