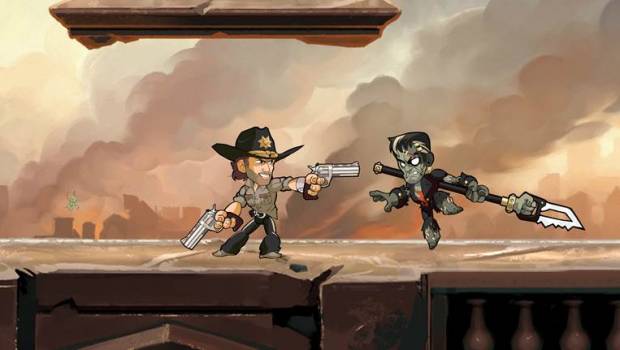 The Walking Dead is coming to BRAWLHALLA

Today, Ubisoft announced that Michonne, Rick Grimes, and Daryl Dixon from AMC‘s The Walking Dead are now available in Brawlhalla as Epic Crossovers. The in-game event that kicks off today through to October 28 features Walker Attack, a new game mode where players and their friends have to fight off endless waves of walkers for as long as they can. It also features a new map depicting the survivors’ prison from seasons 3 and 4 of The Walking Dead, a new ‘Days Gone Bye’ podium, and a new ‘Walker’s Grasp’ KO effect.

Each Epic Crossover is available for 300 Mammoth Coins via the in-game store. All items, Epic Crossovers, game modes, and maps will still be purchasable and playable after the Event ends.

Developed by Blue Mammoth, Brawlhalla is an epic free-to-play platform fighting game that brings players to the fight for glory in the halls of Valhalla. Choosing from more than 50 unique characters, players can jump into single-player and co-op modes as well as online and local competitions. Brawlhalla also supports cross-platform play between the Xbox One family of devices including the Xbox One X, Nintendo Switch™ system, PlayStation 4® system, PC, iOS, and Android devices where players can play custom games and queue together for all online matchmaking.