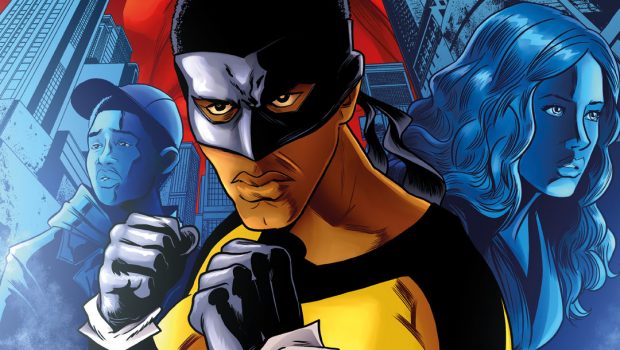 Summary: A new hero rises. New villains threaten the city. Can our hero, Malcolm find the strength to triumph over the city's villains?

High school teacher during the day, turned hero when night comes, The Urban Legend tells the story of Malcolm T. Madiba, who dedicates his life to fighting crime. It is set in the “City of God” or Capital City, where violence and corruption run rampant. It is a failing city where essential services have been limited or just cut off, including policing. Madiba or The Urban Legend, with the help of a journalist by the name Sarah Banks, are the only people motivated enough to stand against the rising injustice.

The Urban Legend Season One includes four issues, exploring different plotlines, supporting characters, and villains. The first issue introduces the main protagonists, Malcolm and Sarah, as well as the cause of all their problems in the form of a villain by the name of Young Evil and his father, The Devil’s Advocate. Malcolm’s brother is seen investigating Young Evil, but unfortunately, these steps lead to his demise, consequently fueling the hero’s resolve to fight crime. The issue ends with a huge fight or a one-sided beatdown from the angry hero as he beats Young Evil’s thugs.

The second issue introduces new villains and power brokers such as The Black Godfather, who is as ruthless and cunning as The Devil’s Advocate. We later learn that the two have divided their criminal enterprises into specific parts of the city, but Young Evil’s actions almost cause an all-out war. We finally get to see the two main protagonists meet and a showdown between the big bad, The Devil’s Advocate, and our hero.

In a world saturated with superheroes, who have different superpowers, The Urban Legend feels unique in its way with the writer’s approach to make him completely human relying wholly on his fighting skills. I loved watching the hero knock out the other guys, making him seem to be above the rest in skill. There is moderate gore, especially during Manchild’s beatdown of our hero. We are all drawn to different aspects of stories, and I have to admit, I did want to see what would lead to the hero’s evolution, and this beatdown is exactly what he needed. We cannot help but feel sorry for the hero as he tries to fight back but is ultimately crushed.

The story’s plot is well-paced in the first three issues, leading up to his beatdown. The last issue feels rushed where a lot is happening, including the hero’s evolution, a betrayal among the criminal syndicate, the passing of nine whole days, and the final showdown between the hero and all the villains he met before. Despite this, I like that the creators have gone to great lengths to ensure that the reader does not miss any of the details, even though the panels are fewer.