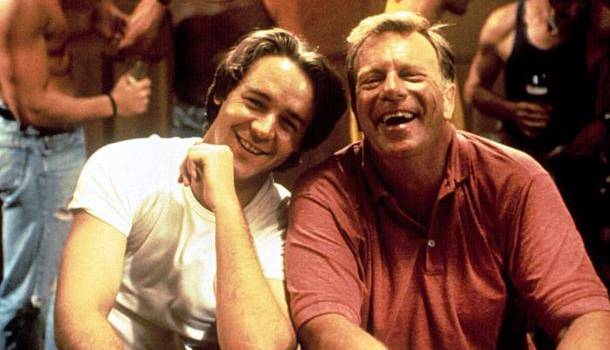 The Sum of Us Blu-Ray review

The Sum of Us: Macho widower Harry (Jack Thompson) and his gay son Jeff (Russell Crowe) share a home, a close bond and a desire to find long-term relationships. Their dry spells seem to be over when Harry meets attractive divorcee Joyce (Deborah Kennedy) and Jeff meets local lad Greg (John Polson).

This film is actually based on a play of the same name by David Stevens, and is quite a significant and popular film, especially since it was released in 1994, at a time where attitudes towards gay people were less favourable than today.

The themes of this film and indeed the story, is quite simple in that the characters themselves and their lives are so relatable, especially for anyone who has lived in the 90’s. The archetypes of the story, such as the father who loves his son but doesn’t ‘get it’, the prejudiced girlfriend, or the gay son who isn’t quite free to be himself and worried about disappointing his father; are all existing within the paradigm of a typical atypical family unit, not perfect but not completely broken either.

The chemistry between Crowe and Thompson is incredible, and according to Thompson in the included special features interview, that on screen chemistry is owed to the off-screen relationship that they developed upon first meeting in the early stages of the production.

In the interview, Thompson discusses how they kept the integrity of the dialog from the original play, “we knew the dialog was right, but we just had to work out how to say it.” He went on to say that the he and Crowe bounced off each other; which is what made for excellent delivery between the two.

This film breaks the 4th wall as it did in the play, which actually ties all of the elements of the story together and includes the audience into the relationship and the mindset of the characters. There is a further understanding of the back-story that is gained from this, which further informs the audience of the feelings of the characters, towards themselves and each other.

It is by this mechanism that further amplifies the relatable nature of these characters and the story of this film, it is difficult to watch this film and come away with less appreciation for those close to you.

The Sum of Us stands the test of time even today, with its entrenched Aussie’ larrikin, tongue-in-cheek witty one liners, which are still just as funny today as they were in 1994. It is also a great opportunity to check out Russell Crowe in some of his earlier, pre-dad-bod work.

The Bluray also includes original theatrical trailer. This is a great film, go revisit it today!

Summary: Russell Crowe in his pre-dad-bod glory! The Sum of Us stands the test of time even today, with its entrenched Aussie’ larrikin, tongue-in-cheek witty one liners, which are still just as funny today as they were in 1994.