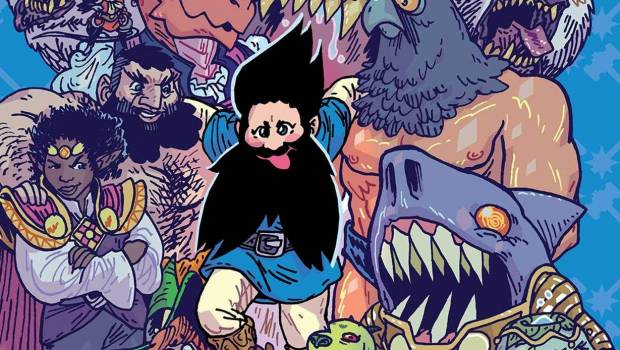 The Savage Beard of She Dwarf (2020) Review Tim Chuma
Score

Summary: The adventures of She Dwarf and her band of companions for the first time in print form.

She Dwarf is not having a good day, turning up in town she gets tripped over by a local tough, who she bests in beard to beard combat, is attacked by land sharks at bar, duped by a leprechaun to kill a dragon for gold that was not his and almost killed by an elf who has sworn to stop her quest and then things get worse.

I had not heard of this one before but it was a weekly web comic in a similar vein to BattlePug and had been running for quite a few years when the author was approached to put it in print. It does not really seem episodic in the story even though it has multiple chapters and was told in a small instalment each week.

The fantasy setting is quite well done and does not seem derivative of other stories. Closest I could think of would be Cheery Littlebottom from Feet of Clay and Gimli talking about female dwarves in Lord of the Rings. In most other stories you would expect Muscle Hawk to be one of the main characters but you barely even see him this and it is the b-team that ends up winning the day.

I did enjoy the artwork and the character designs were great including the shorcs, mutant bear, Queen of Mount Grave, Bears for Hands, Cockatrice and Questing Beast. I did like the goblins who seemed more like puppy dogs in this story.

It is a great story and I would recommend it if you are into fantasy and would like something different, let’s get beers!