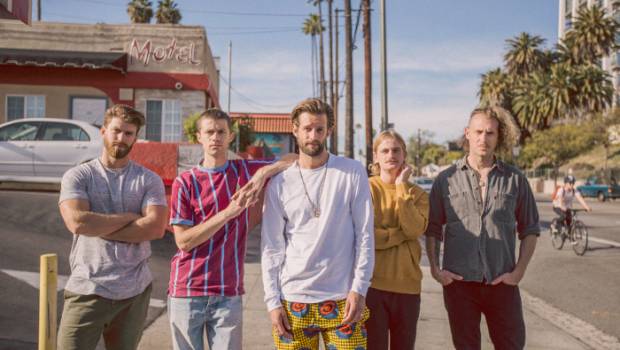 It gives Ivy League Records great pleasure to announce the brilliant third album from beloved Menangle band The Rubens, titled LO LA RU, a bold and confident record that effortlessly picks up from where their Hottest 100 topping single ‘Hoops’ left off. The album is out Friday 29 June and is available to pre-order now in digital, CD & LP formats, plus various merchandise bundles.

To coincide with the announcement, the group are incredibly excited to release the powerful new single, premiered via triple j’s Drive program, titled ‘Never Ever’. The new track, featuring recent APRA Breakthrough Songwriter of the Year winner Sarah Aarons, is a relatable and heart wrenching tale with Sam Margin and Sarah’s voices acting as yin and yang, so different, but so perfectly matched and harmonious within the track.
Listen to ‘Never Ever (feat. Sarah)’ here

When Elliott and Sam Margin got an email letting them know that ARIA Award winning, Grammy Award nominated songwriter Sarah Aarons was going to be in Sydney for the holidays, was a fan of theirs and was keen to write a song with them, the guys thought ‘why not’. At that point, they were on their way to Brooklyn to put the finishing touches on their highly anticipated third album.

The band went into the studio with no expectations. In their mind, the album was done and whatever came out of the session would be an experiment in collaboration, something new for the band, or, much like Sarah’s long list of songwriting credits (LDRU/ZEDD & Alessia Cara/Dua Lipa/Jesse Ware), something for another artist to use.

Elliott on the collaboration:
“The day we met Sarah in the studio, she told us that her Grade 10 teacher introduced her to our song ‘Lay It Down’ and that is what inspired her to do music in Year 11 & 12. We were pretty blown away with that; a good sentiment to start writing a song together.

“We actually thought with the album completed we would be writing a song for someone else. The main chord structure and melody was something I had been fiddling with for a while but couldn’t find the words or story for. After meeting Sarah and having a chat we got stuck into the song, started throwing ideas around. Pretty quickly we realised it needed to be a duet and from there the story started to take shape.

“The song became about these two lovers caught in the moment as their relationship drops away. There’s to-ing and fro-ing as they pass blame and second guess their actions before they realise that what they had is already over.”

It wasn’t until the song sat with the band for a few days that they realised just how ‘Rubens’ the track was, and just how much they wanted it on their third record, LO LA RU.

On LO LA RU The Rubens used the success of single ‘Hoops’ as an opportunity to spread their creative wings, pushing their music into new territory that is exciting for them, and hopefully by extension, their audience as well.

The story of the album began at the 2013 Laneway Music Festival, where The Rubens befriended NYC rapper EL-P (Run The Jewels) and his band, which included his Run The Jewels producers/collaborators, brothers Wilder Zoby and Little Shalimar (aka Torbitt Schwartz). In 2017, this friendship turned into a musical collaboration when both producers flew out from the bustling streets of New York City to the band’s newly created recording studio, housed in a World War II communications bunker in the outskirts of Camden in Sydney’s deep south west. It was here that LO LA RU came to life.

Indeed, LO LA RU presents a fully realised sound that picks up on the RnB and hip-hop influence that was hinted at on songs like ‘Hoops’ and ‘Bitter End’, bringing those stylistic references to the fore, without losing any of the soulful warmth that typified their earliest tracks like ‘Lay It Down’ and ‘My Gun’ and won them the adoration of fans all over Australia and the world.

2018 has already been a huge year for the group. After last year’s October release of the exuberant party jam ‘Million Man’, the first taste of LO LA RU, the band played to local audiences at the likes of the Sydney Opera House and the Forum Melbourne before embarking on a global tour – one that saw the band sell out shows in Vancouver, Toronto, New York & London. Indeed, the band is back and eager to build on the excitement of their first two albums, The Rubens & Hoops, that have gone Platinum and Gold respectively in Australia.

2018 is set to be a big one for The Rubens – with more exciting news to be revealed soon!