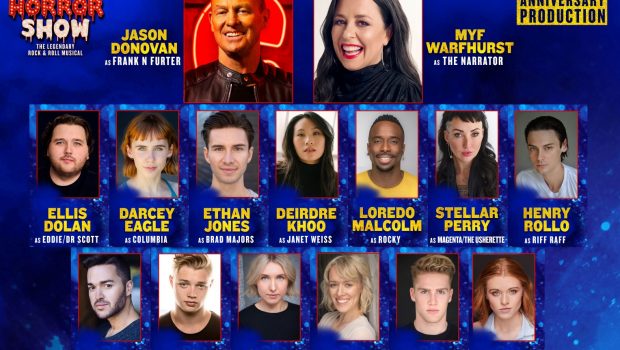 The 50th Anniversary production of iconic Rock ‘N’ Roll musical The Rocky Horror Show has confirmed the final cast members for its Australian Tour which kicks off global celebrations at Theatre Royal Sydney on February 14 before seasons at Adelaide Festival Theatre from April 13 and Melbourne’s Atheneum Theatre from May 18.  Full casting for the Adelaide season will be confirmed soon.

Joining the cast as Magenta alongside Australian superstars Jason Donovan as Frank N Furter, and Myf Warhurst as The Narrator, will be Stellar Perry (X Factor, The Voice, Bell Shakespeare’s The Lovers). As previously announced, further principal cast will be Ellis Dolan as Eddie/Dr Scott, Darcey Eagle as Columbia, Ethan Jones as Brad, Deirdre Khoo as Janet, Loredo Malcolm as Rocky and Henry Rollo as Riff Raff.

Starring alongside them on stage as The Phantoms will be Josh Gates, Catty Hamilton, Jackson Reedman and Erica Wild, Keane Fletcher and Kristina McNamara round out the cast as the Swings.

The Rocky Horror Show first began life in 1973 before an audience of just 63 people in the Royal Court’s Theatre Upstairs. It was an immediate success and transferred to the Chelsea Classic Cinema, before going on to run at the Kings Road Theatre, 1973-79 and the Comedy Theatre in the West End, 1979-80. In 1975 it was transformed into a film called ‘The Rocky Horror Picture Show’. This film adaptation took over $135 million at the Box Office and is still shown in cinemas around the world nearly 50 years after its premiere, making it the longest running theatrical release in cinema history. Many stars of the stage and screen including Russell Crowe, Tim Curry, Susan Sarandon, Meat Loaf, Jerry Springer, Adam Lambert, Emma Bunton, Stephen Fry, Reg Livermore, Bert Newton, Gretel Killeen, Derryn Hinch, and Shane Jacobsen have appeared in The Rocky Horror Show over the past 50 years. This iconic brand holds a unique place in theatre history, a show which has defied the decades and continued to grow in popularity.

The Rocky Horror Show has just completed its most successful UK tour and is one of the top performing musicals in the post pandemic era. It has also recently toured in Israel, Germany, Switzerland, Austria, Italy, Argentina, Romania, Slovenia, Belgium, Tokyo, Korea, Brazil, Canada and Iceland.

“Hard to think of another musical quite as unique as this. Christopher Luscombe’s affectionate production feels like a genuine blast from the past” – Mail on Sunday

FULL CASTING FOR THE ADELAIDE SEASON WILL BE CONFIRMED SOON