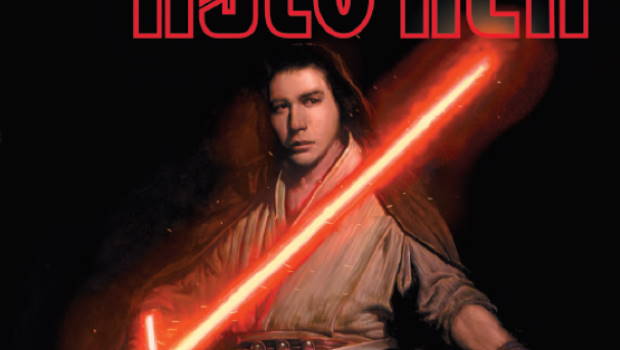 The Rise Of Kylo Ren #4 Review

Summary: Ben's struggle to hold onto his humanity as he is pulled further into the dark comes to a dramatic climax.

Ben Solo has left a trail of destruction behind him since striking down Luke Skywalker. His path has been steered by the mysterious Snoke and though he thought he had paid the price of membership to the outlaws The Knights of Ren by killing his friend Hennix Ben finds he must still prove himself and rides with the knights looking for something to destroy.

There’s a certain “obviousness” to the story here. By that I simply mean that anyone who is reasonably familiar with the world of Star Wars, will have a pretty good idea of the main beats… Ben feels conflicted, on the one hand he doesn’t want to just go around killing anyone and anything but on the other hand he seems drawn to do so. Yet within that somewhat set structure we still get some moments of genuine feeling. Certain moments really bring out the anguish Ben feels traveling this path to the dark side, you might even feel bad for his plight.

Much like a professional wrestler throwing a punch, the “impact” of that punch won’t seem like much without being backed up by the receiver doing their part to sell the illusion. So it is here with the art more than doing their part to sell the emotional tug of war throughout this issue. What can’t be conveyed in words is shown all over Ben’s face in many frames… the confusion, the pain of being pulled to a dark future part of him wants nothing of.

There are some pretty obvious beats throughout this story but they don’t detract from the enjoyment of the experience. That enjoyment is thanks to a great writing and artwork. For anyone wanting to know how Ben became Kylo Ren this series is a must and this issue especially shows the pieces fall into place to create one of the darkest characters to light up the Star Wars stage for some time.