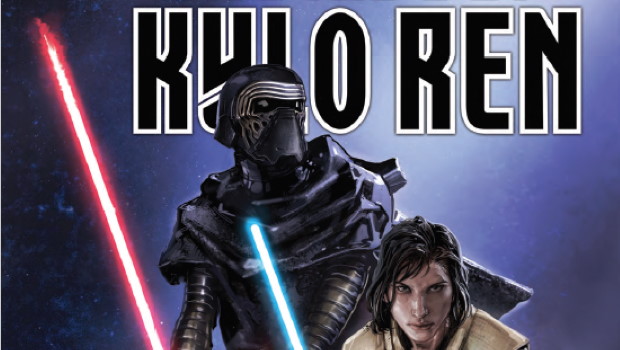 Summary: Ben Solo is on the precipice of where his life could lead, the Jedi Order or The Knights of Ren? Seemingly having ended his links to the Jedi's and with the Knights of Ren welcoming him... his fate seems all but decided.

After striking down his master Luke Skywalker and leaving the Jedi Temple in flames Ben Solo fled to Snoke, the only man he believed he could trust. Ben now finds himself before the Knights of Ren, convinced they are the path to becoming his true self. But before the Knights of Ren will accept him into their ranks, he must prove himself… if he can.

There aren’t a lot of pages to develop a story here, but somehow Charles has managed to pack a lot in and with our foreknowledge of Kylo Ren, it’s enough to create quite a compelling story. Until now we have had glimpses of Kylo’s beginnings, now we have that development more fleshed out and we can see where the conflict and confusion creep into his mind. Charles gives us a Kylo who is still trying to cling to his good side… he is still Ben Solo, but the change is starting to take hold and as his doubts grow, so too does his fear and anger and as we know… that is the path to the dark side, a side the Knights of Ren will be only too happy to take him on.

The de-aging process here is impressive… just kidding. It must be a bit more of a stressful job though to be a comic artist and have to depict a known, real person, character. Or at least a character based on the likeness of a real person. When the character is purely made up you can have fun with features and such, when it’s a character based on a real person you have that person as a reference, which can work for an artist… having images to reference, but it also means readers know what that person is supposed to look like and if there isn’t a resemblance then the whole thing can fall apart. Fortunately here, Will has done a great job of capturing the essence of Adam Driver and managed to give him a more youthful look that shows his uncertainty. We can practically see the fear and anger take hold of him as the story progresses.

If you are a fan of the movies, or someone who perhaps thinks they went off the rails… this might be a good comic for you. It develops the character of Kylo Ren in an understandable way. The story doesn’t feel rushed or like it’s trying to pack too much into the space it has. It ends on a point that (certainly for me) makes you want to see what happens next. A worthy title to pick up and possibly give you… a new hope for the stories of the Star Wars universe.