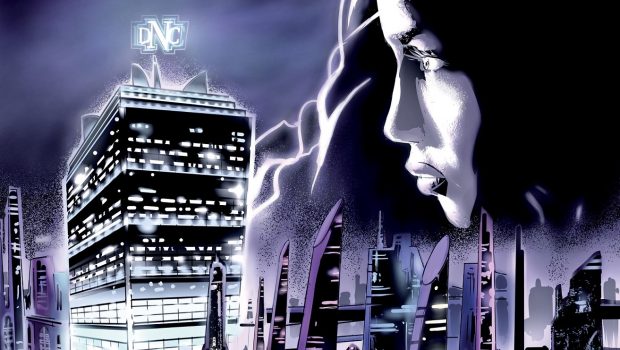 Cain uncovers some unsettling information about a military plot involving his people and the harvesting of stolen stem cells. Armed with these details, Cain, Yindi and Pem embark on a dangerous mission to stop a new shipment of resurrection serum from arriving in Nova Lucis.

This issue begins with Cain reminiscing about his past, as he watches a video of his wife and daughter playing at the beach. This quiet moment of reflection is suddenly interrupted by the arrival of General Gunvaldsson, the head of the military’s external aid unit. This does not bode well for the SDR and their investigation of the Drexler case. 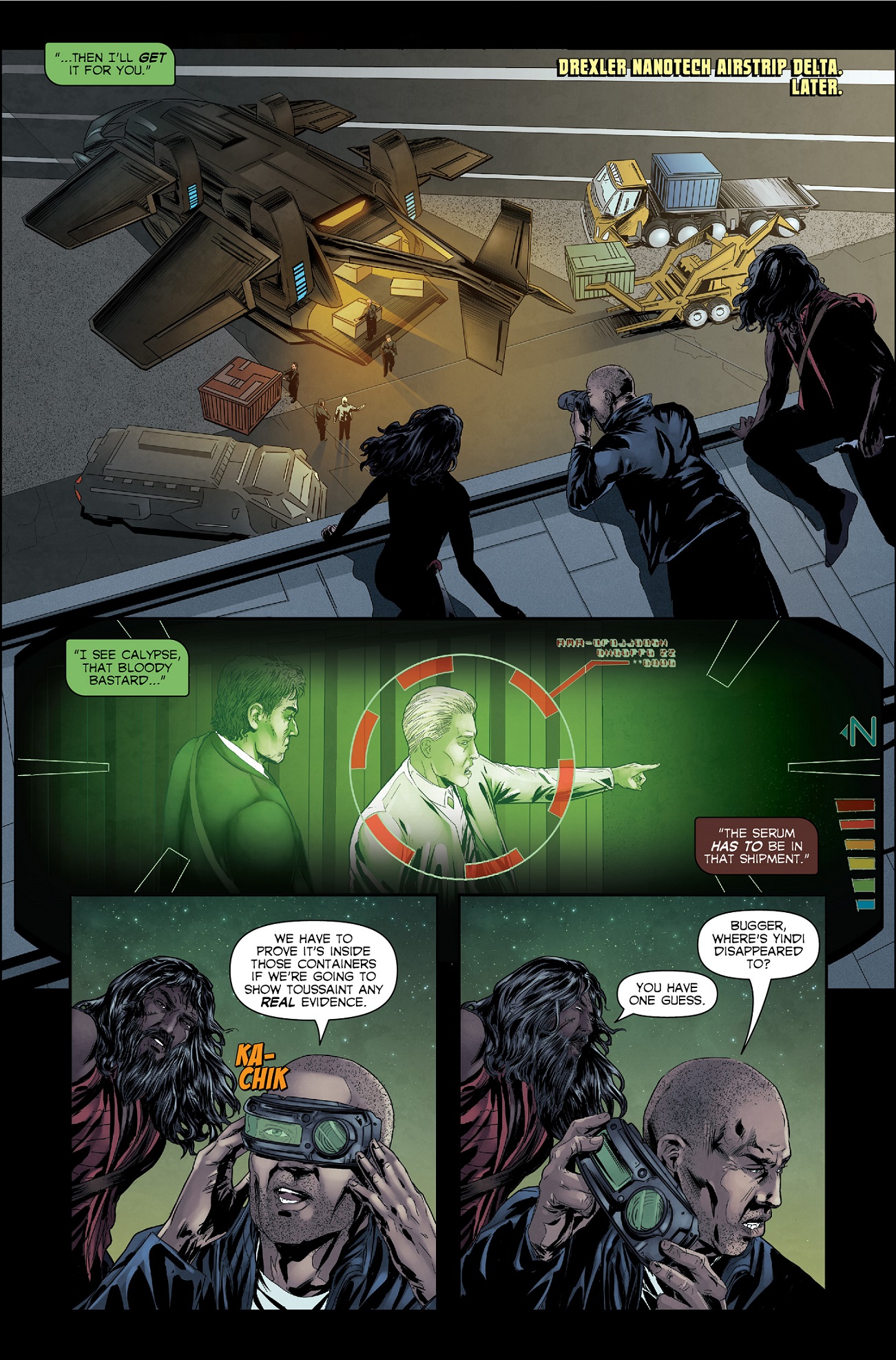 Cain then decides to leave and rendezvous with Yindi and Pem, so as to get more information and some answers about what is really going on. Pem claims that Drexler has been kidnapping indigenous people for years, harvesting their DNA and taking their stem cells. The lure of eternal life makes people do pretty awful things to one another, this being a prime example. Pem and Yindi also reveal that they have been tracking Drexler and have discovered that a new shipment of the banned resurrection serum will be arriving in Nova Lucis that night. The plan is to intercept them before it is delivered with the help of Cain. They are heading into dangerous and unknown territory, with the fire and determination to stop these criminals before they strike again. 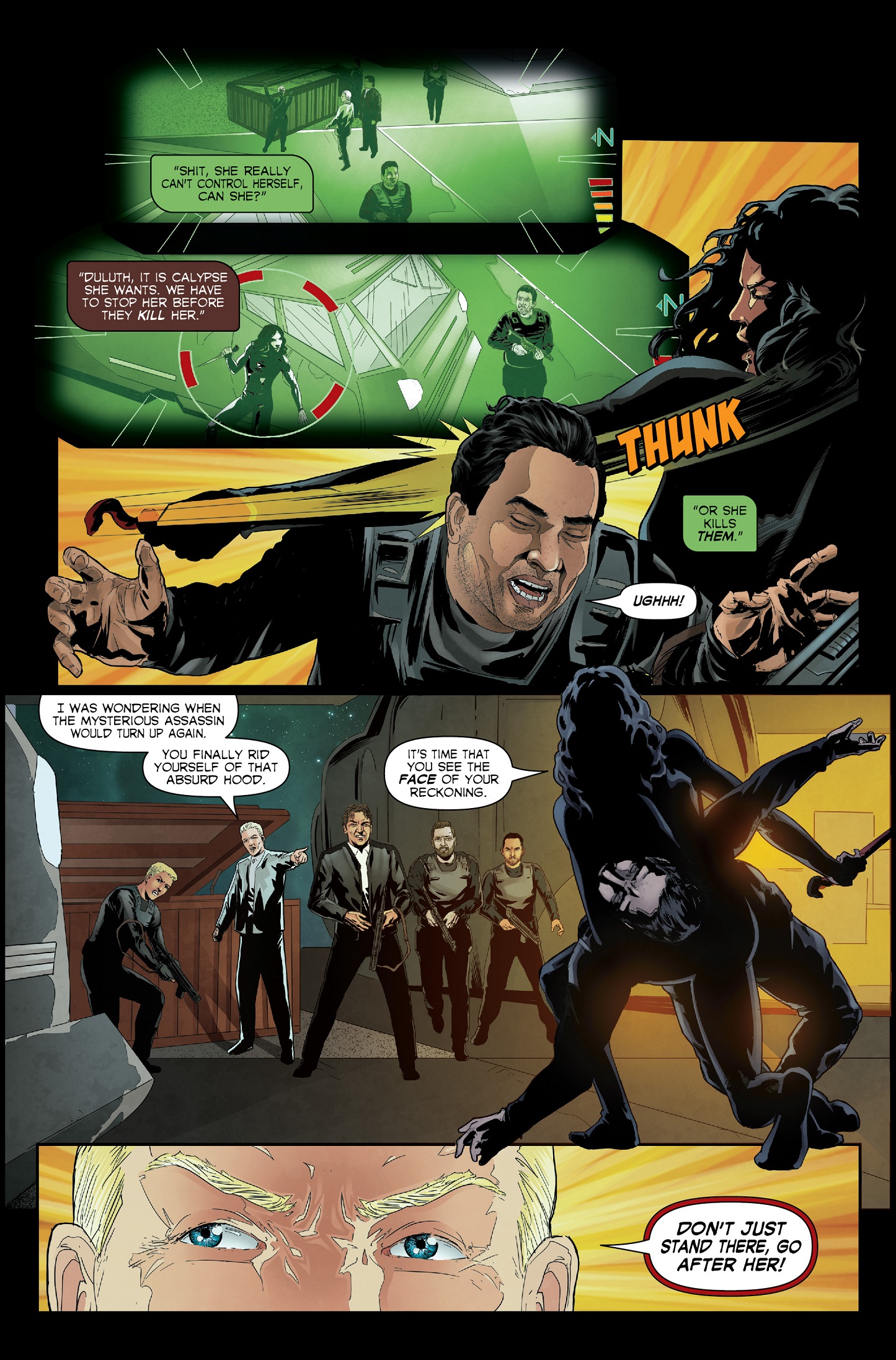 Well, things certainly are heating up on Nova Lucis, with various revelations coming to light in this issue. Stolen stem cell harvesting and a military plot involving Drexler being the major development. Ahh yes, the plot thickens. Cain and Akimi are now working covertly, against the SDR after they were abruptly taken off the Drexler case. This naturally puts them both in a compromising position, however, in the end it is for the greater good. I’m pretty keen to see where things will go from here, as they are fighting against the military and a powerful corporation, who have joined forces. This dark revelation highlights the bioethical issues and morality surrounding immortality and how low people will sink to achieve it. I’ve always found this argument to be a compelling, complex and problematic one, especially when the quest for eternal life comes at the detriment of others, such as we are seeing in this story. How can one justify immortality at the expense of another life?

I also want to talk a little about the ol’ headstrong Yindi. This is a character I both like and dislike for a variety of reasons. Firstly, I enjoy the new dynamic that she brings to the narrative, and the interesting response that she provokes in her father, Cain. It is clear that he is feeling conflicted and questioning his self-identity, moral compass and loyalty towards his daughter. It makes for some interesting character development, with Yindi being the main catalyst for these changes. Secondly, I like that we clearly know her motivation and the driving force behind her quest for revenge. She makes it very clear why she is working with Pem and seeking vengeance against Drexler, in particular Xander himself. I also find that she is a little mysterious and guarded at the same time, as I’m suspicious that there is something else about her that she hasn’t yet revealed. In saying that, I also find her to be somewhat annoying with her irrational and headstrong way of thinking. I get that she is hellbent on revenge, but calm down girl, you don’t have to murder everyone! 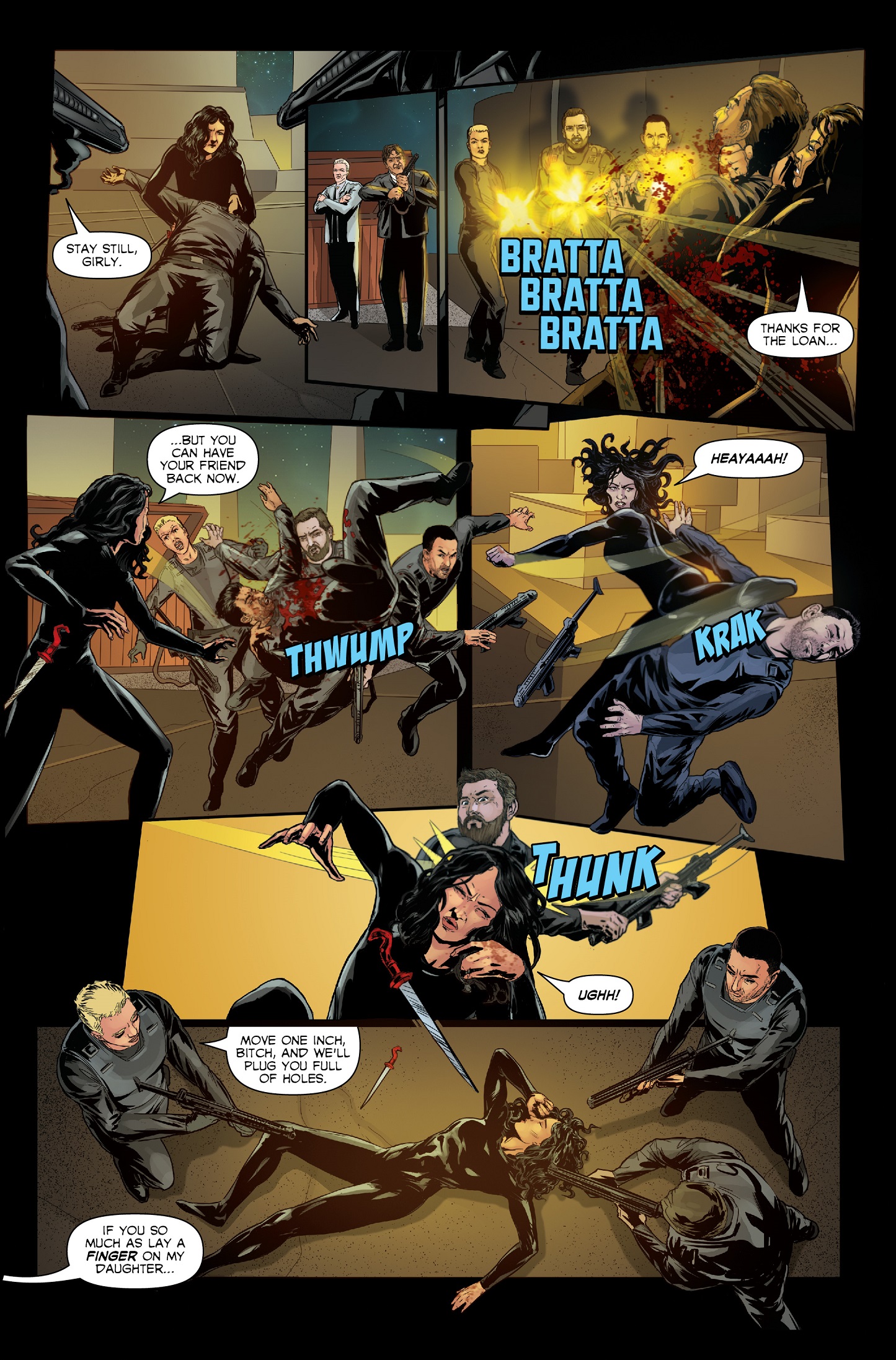 Artist, Crizam Zamora does a great job at capturing the fast-paced action scenes that we see during the night raid on the resurrection serum shipment. There is a nice fluidity to the sense of movement, that made these scenes flow in a really nice way. This stood out to me this time, as I thought the movement in the previous issue was lacking. There is also a nice montage scene that we get to see which has some interesting angles, which I found brought some diversity to the visual narrative. I’m also being a bit picky here, but sometimes the shading feels a little heavy-handed and forced, which makes some of the fabric and facial features appear to be harsh and possess an odd texture. Salvatore Aiala’s colouring works well alongside the art, helping to reinforce the various tonal shifts that we see throughout the issue. I like the neon-like palette of the city, believing that it gives everything a great sci-fi feeling, which is what I expect to see in a futuristic utopian city. Sometimes, however, the colouring on the skin feels like it could be blended better to make the flesh appear less rigid and severe. 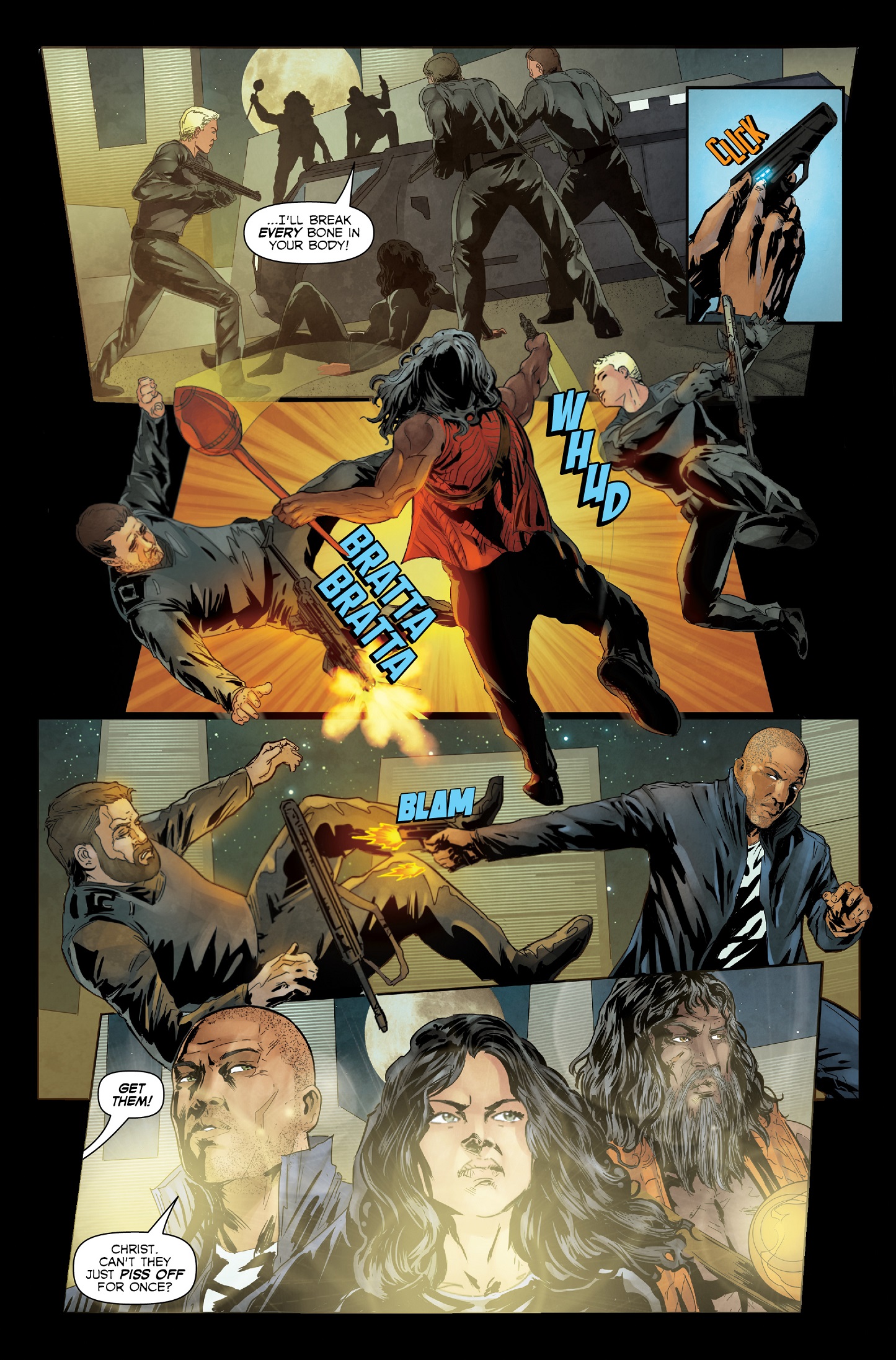 Overall, I thought that this was a revealing and insightful issue of The Resurrected. Things are definitely treading in dangerous waters now, as Cain and his companions venture forth to fight against Drexler and the military. Good luck guys, you’re gonna need it! 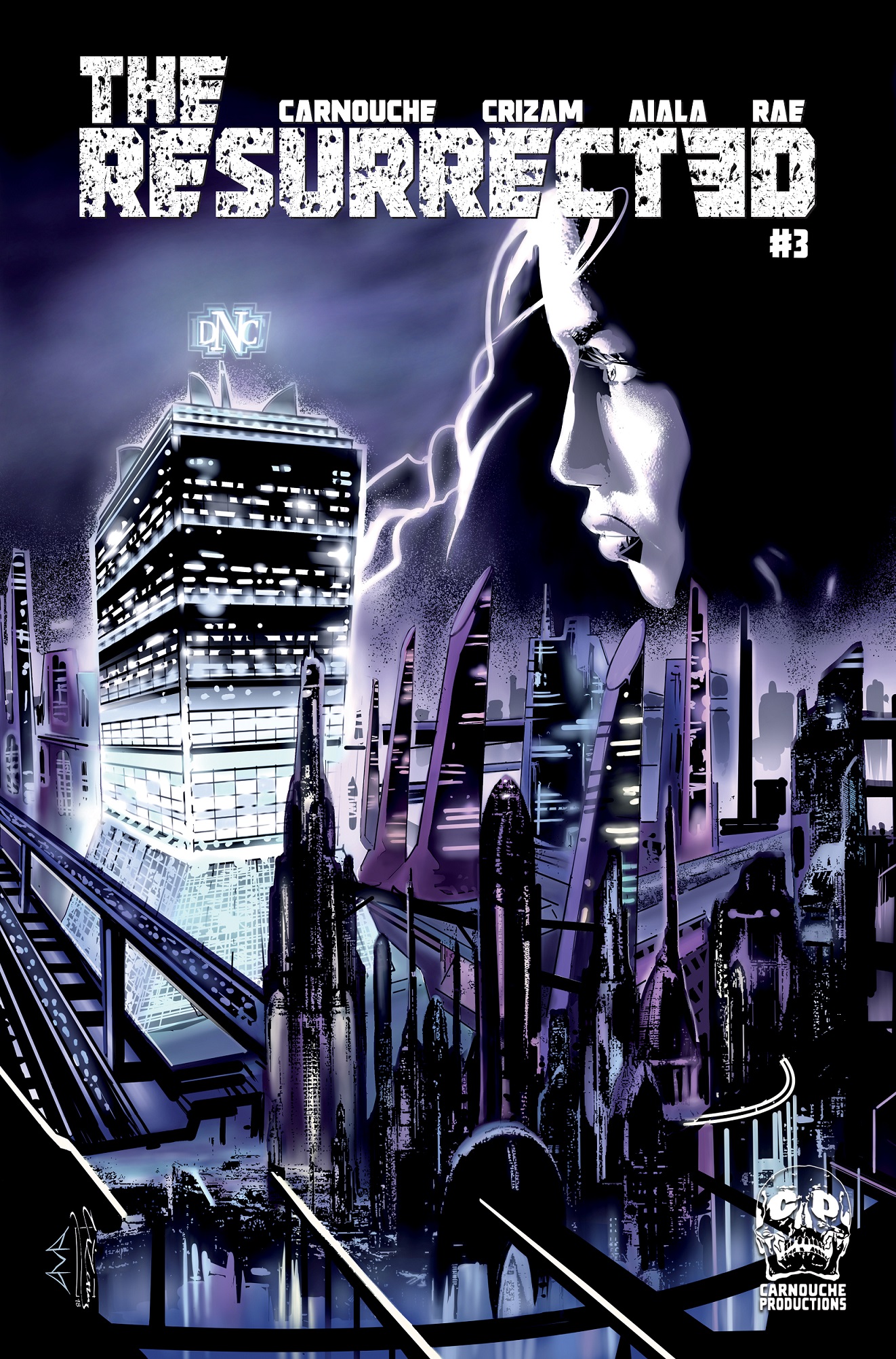