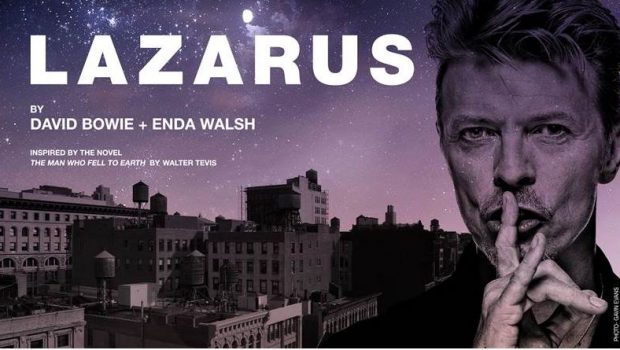 The Production Company are thrilled to announce they are bringing the David Bowie and Enda Walsh musical Lazarus to Melbourne in May 2019.

Lazarus was David Bowie’s final project, first staged in New York in late 2015. This will be the Australian premiere of this ground-breaking musical. Lazarus features 18 David Bowie songs including Changes, Heroes and Absolute Beginners. Inspired by the novel The Man Who Fell to Earth by Walter Tevis – the movie also starred David Bowie – it focuses on Newton as he remains on earth, unable to die. We follow him during the course of a few days where the arrival of another lost soul might finally set him free.

Public are now invited to join the wait-list to be one of the first in line for ticket information at lazarusthemusical.com.au

Executive Producer Rachel D Taylor said “Lazarus was a dream come true for David Bowie, for decades he had spoken about writing a show, and when it was announced off-Broadway in 2015 the entire season sold out in a few hours. When I read the script I found it incredibly moving, especially knowing that it was one of his final projects. And seeing songs like Heroes and Changes come out of the story was just spine tingling. It’s rare to find a musical like Lazarus.”

Chairman Jeanne Pratt said “I am so excited that The Production Company will bring this ground breaking show to Melbourne. I think it’s going to be a great event for Melbourne and a must see for lovers of David Bowie and musicals alike.”

Lazarus will be staged for a strictly limited season in the Playhouse at Arts Centre Melbourne in May / June 2019.

Lazarus is proudly presented by arrangement with Robert Fox and Jones / Tintoretto Entertainment.

All cast and ticketing details will be available at that time.