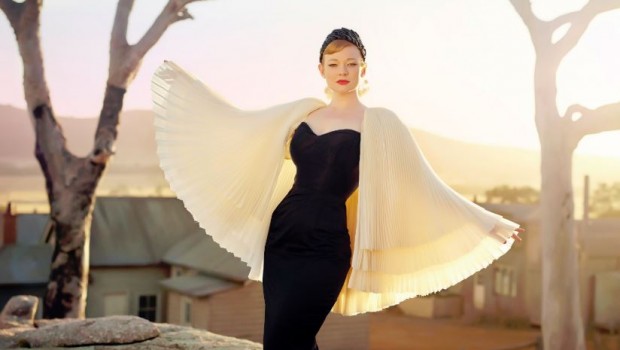 This summer, the power of transformation through fashion will transcend the silver screen to the National Trust’s Barwon Park Mansion at The Dressmaker Costume Exhibition.

Costumes from the box office hit film, The Dressmaker, will be on display in an exclusive exhibition held at National Trust’s Barwon Park Mansion from December 11, 2015.

Based on the best-selling novel by Rosalie Ham, The Dressmaker is a bittersweet, comedy-drama set in early 1950s Australia. Tilly Dunnage (Kate Winslet), a beautiful and talented misfit, after many years working as a dressmaker in exclusive Parisian fashion houses, returns home to the tiny middle-of-nowhere town of Dungatar to right past wrongs. Not only does she reconcile with her ailing, eccentric mother Molly (Judy Davis) and unexpectedly fall in love with the pure-hearted Teddy (Liam Hemsworth), but armed with her sewing machine and an incredible sense of style, Tilly transforms the women of the town and in doing so, gets sweet revenge on those who did her wrong.

The Dressmaker Exhibition, developed by The National Trust Victoria, in partnership with Marion Boyce and Film Art Media, takes you into the inner world of the costume department with footage of the costumes being created and stories behind the corsetry and art finishing. This allows visitors a rare glimpse into how whimsy, glamour and humour are used in the creation of these stunning costumes.

Australian Actor Sarah Snook, who plays Gertrude ‘Trudy’ Pratt in the film said that costumes are vital for actors when inhabiting a new character as it allows them to believe the imagination.

“Pretending to be someone else wearing your own clothes is very difficult, but when you have an artist who has designed, curated and collected outfits to express an idea, it helps an actor to embody the emotions and transformations of their character.”

Sue Maslin of Film Art Media, producer of The Dressmaker, said they are proud of the partnership forged with the National Trust, which will bring the couture and glamour of The Dressmaker to the general public.

“We are thrilled at the reception the film has received and we’re very excited to be able to showcase the beautiful costumes created by Marion Boyce and Margot Wilson, enabling admirers to appreciate the stunning wardrobe first hand”.

For more information or to book exhibition or public programs tickets visit http://dressmakerexhibition.com.au/ or call (03) 9656 9889.