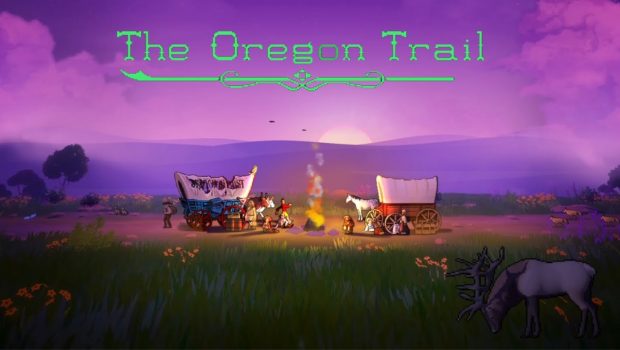 Summary: The classic returns with some modern updates. 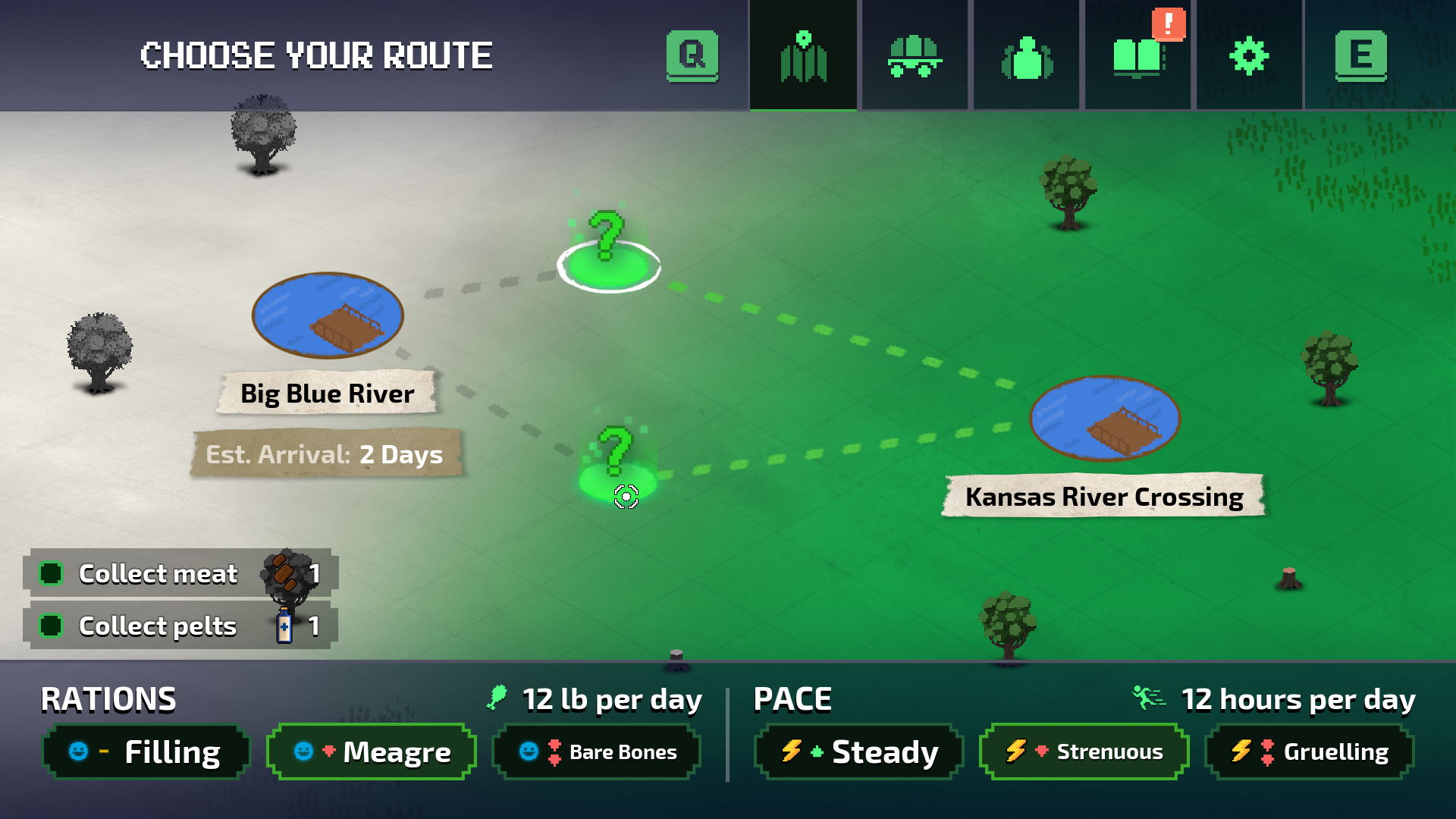 For those of use in Australia I believe our equivalent was Crossing the Mountains… a similar idea of setting off on an adventure to explore the wild land ahead of you (ignoring of course the peoples who have been living there for long before you arrived). The Oregon Trail is probably best known for the phrase “you have died of Dysentery” and that remains a danger… but I’ll get back to that. 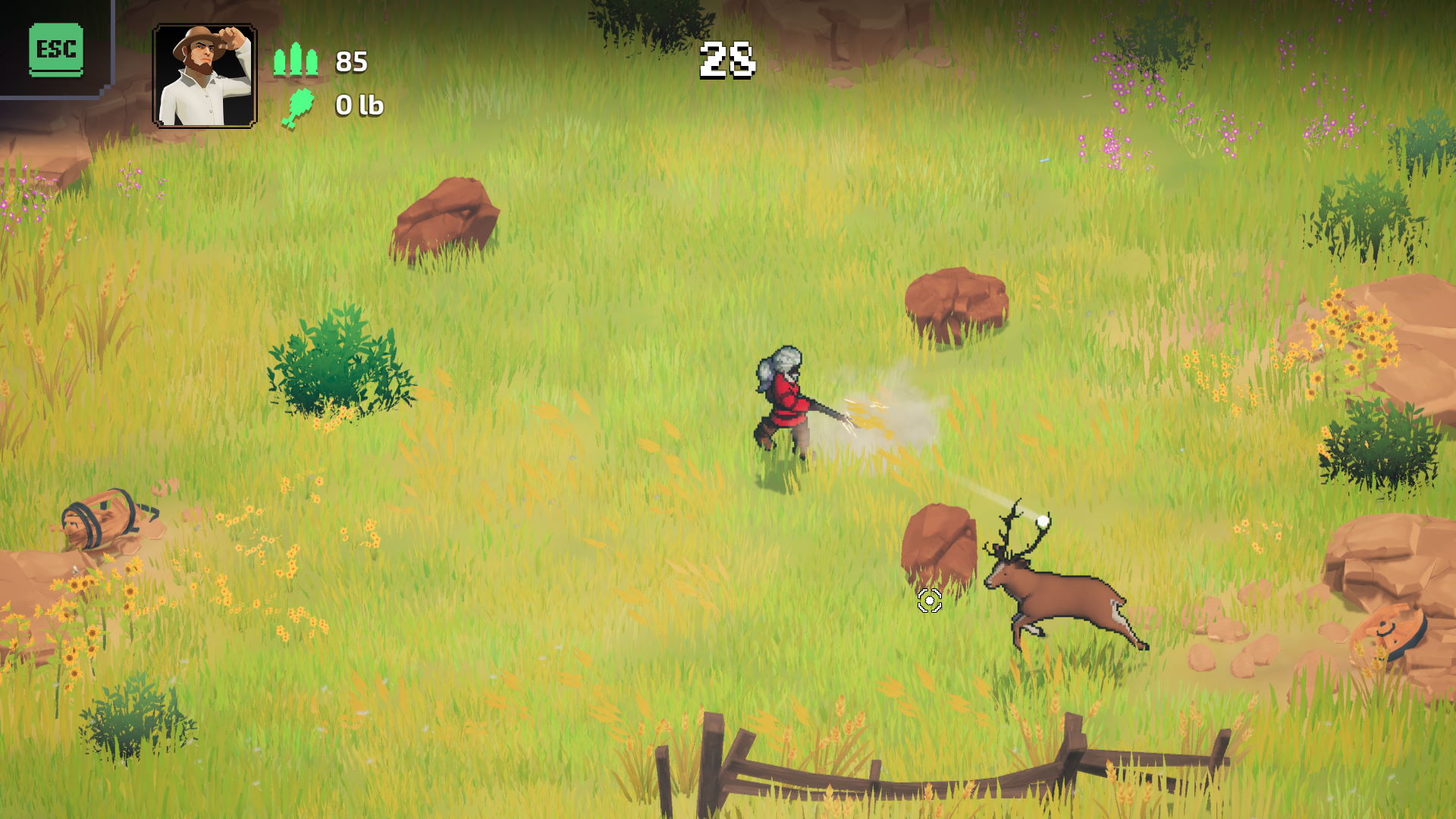 Visually the game takes a pixel art approach that works quite well to evoke notions of nostalgia whilst also sneaking in some more modern lighting elements and higher resolution along with a few other touches to keep it a bit fresh. But the gameplay is where the real heart is and I quite enjoyed it. I don’t know how true to the original this modern version is but I suspect at the very least the spirit is there. You select your party, your supplies and off you go. There’s not a lot of choice for your party members, basically just a handful of characters you can select from… no real customisation… but I wasn’t too fussed, I was too keen to get out and see the sights. 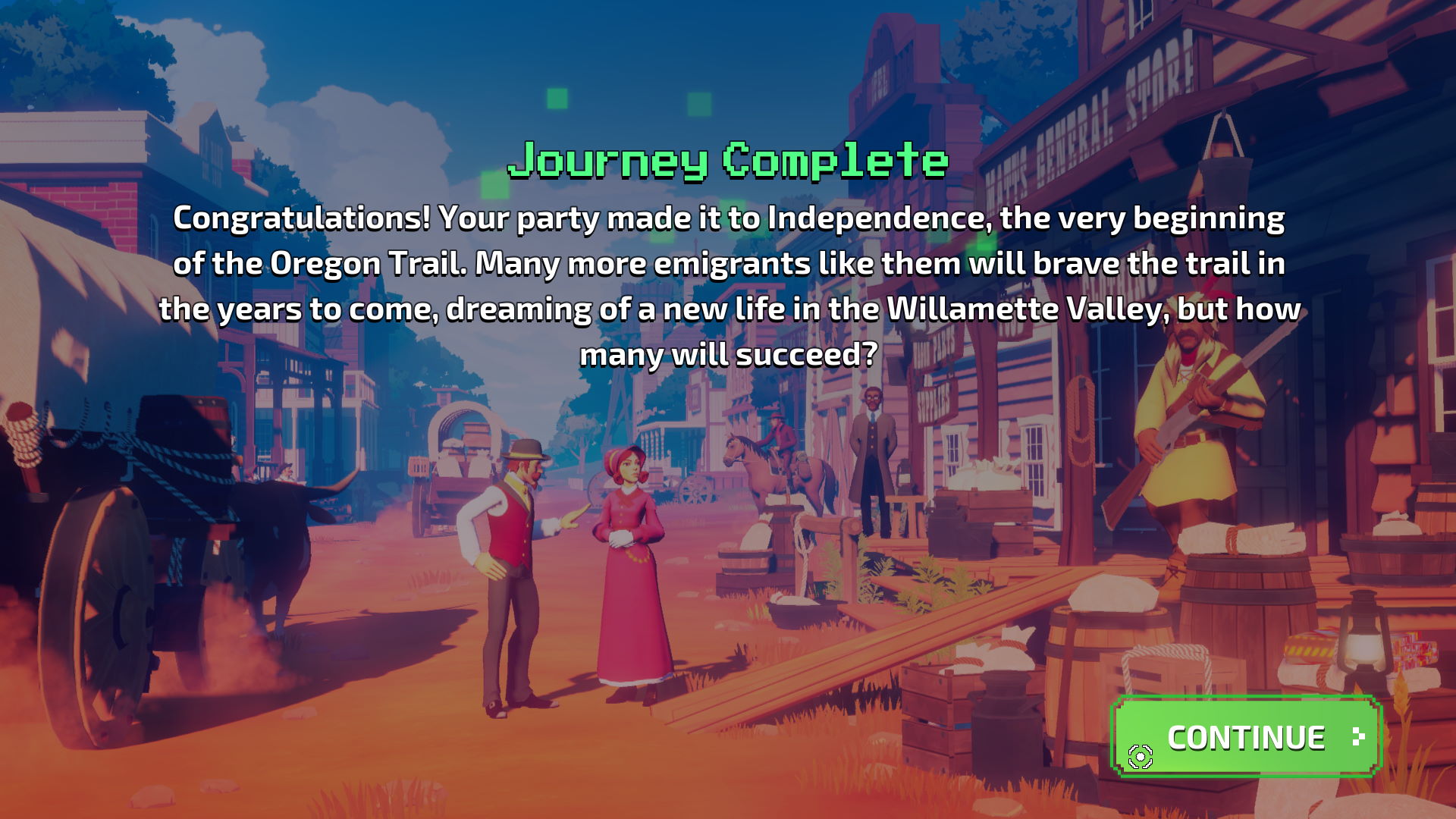 I don’t know whether my experience playing through the game would have been much different had I been a child, I suspect so, because I managed to get from start to finish without loosing a single member of my party (we did still experience loss via a friend we met on the way… which was still very sad but I had no say over that). Coming to the game from an adults perspective might make it easier in terms of selecting what items will help the most with the crossing… weighing certain options more effectively and so on… or perhaps the game has been made a little easier, it’s hard to tell. 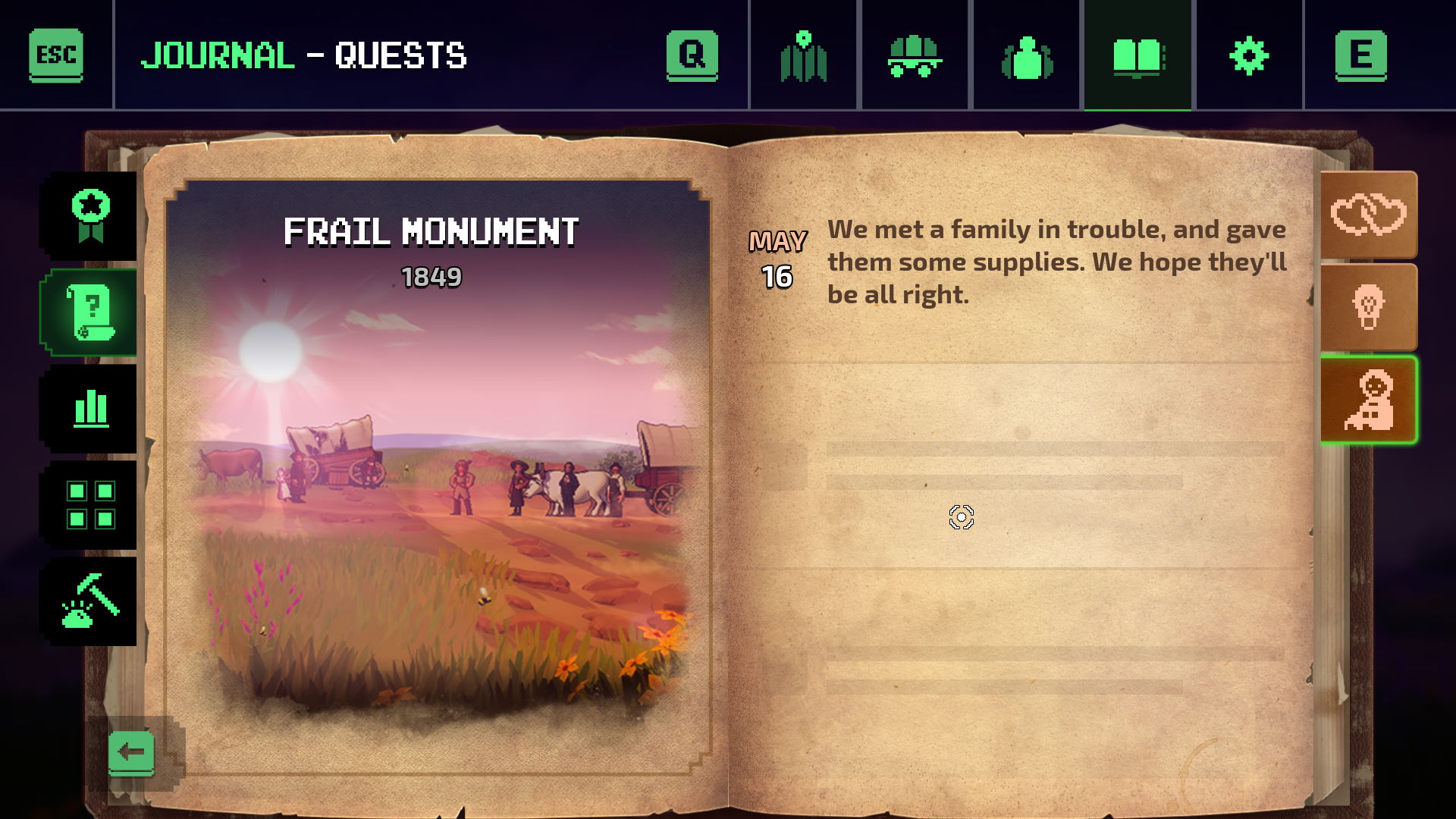 As you make your way through the game you will unlock little bits of historical fact and I really appreciated these. When you start the game it also mentions that certain aspects of the game have been updated to reflect modern understandings of certain things so we get what some would call a more “politically correct” version. I don’t have any direct knowledge of what was in the original or what the changes specifically involved but if they are keeping with actual historical reality than I’m fine with it. 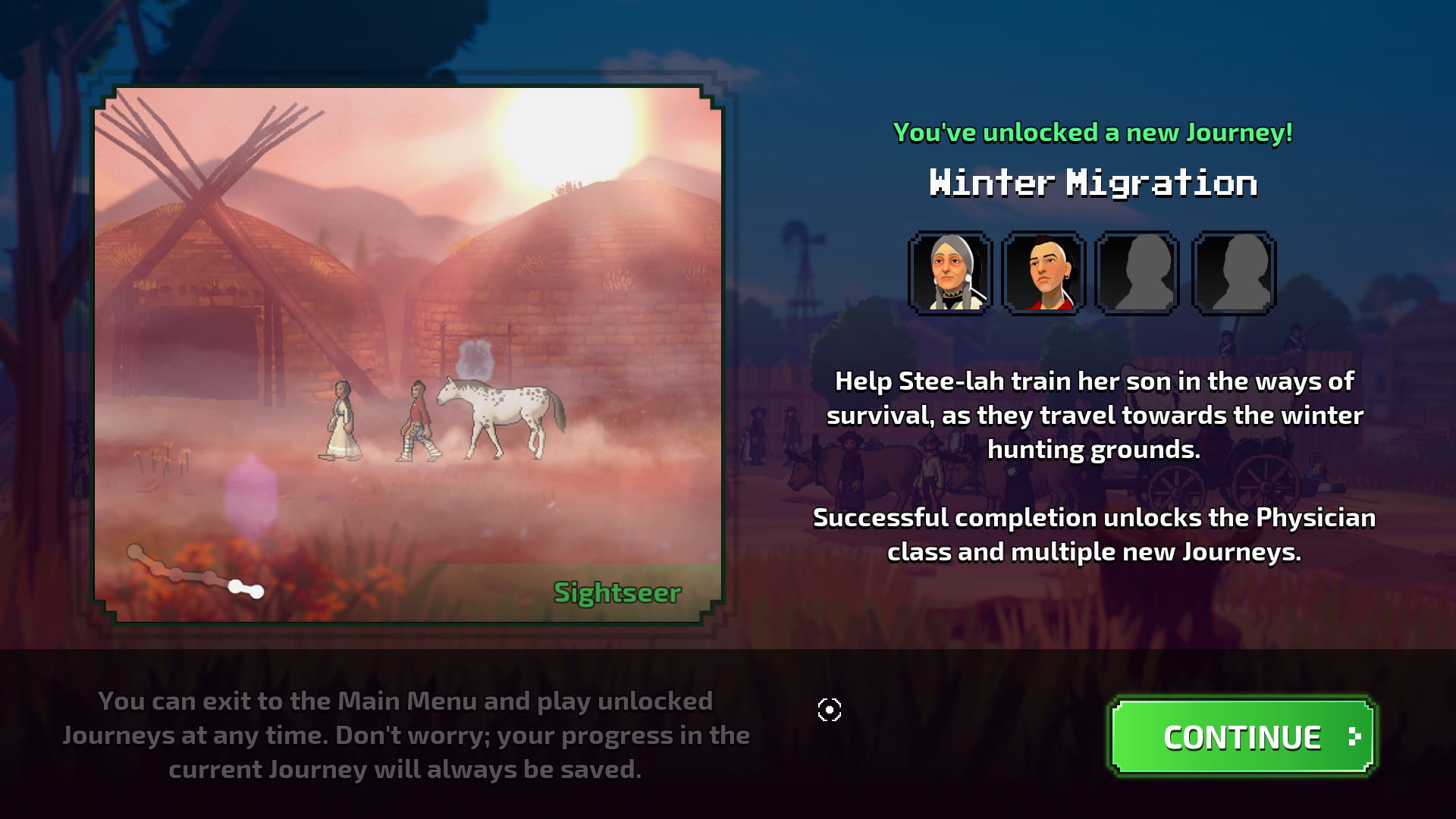 In regards to the dreaded dysentery… I never found it to be a death sentence… a few of my party fell ill with it (a few times for some of them I think)… but due to having a supply of medicine we were always able to recover (also never drinking from stagnant water probably helped). This is one of those aspects that I can’t help but think has changed with age… the original target audience  (if I’m not mistaken) was school children as a way of teaching them through gaming… so playing it as an adult with an adults accumulated knowledge of survival/medical/general concepts probably does make the game a bit easier… either way I still had fun and as you play you unlock different challenges to provide a bit of replayability. 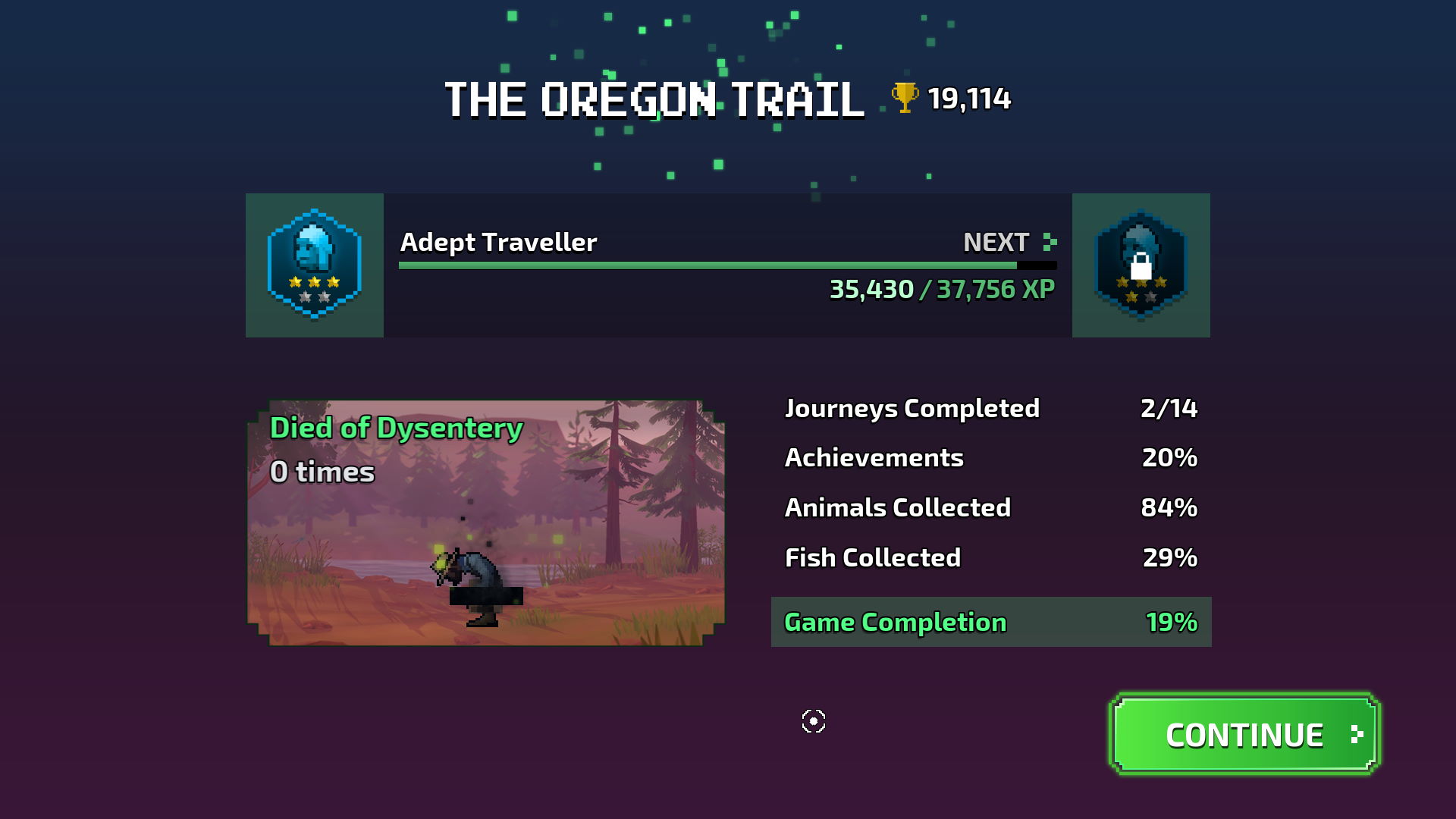 I think it’s a fun little game and am happy to recommend it… it might be a little pricey for what’s there (I completed the main game in a bit over 6 hours), there are the extra challenges and each play through can provide different experiences… but perhaps wait for a sale to get the best value.