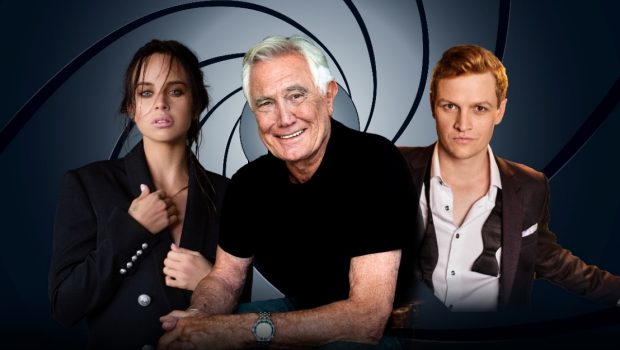 The Music of James Bond with George Lazenby Live on Stage

Get dressed to kill as Concertworks presents the Australian concert tour of The Music of James Bond with Australia’s original James Bond 007, George Lazenby in September 2022.

George Lazenby, who starred as James Bond 007 in On Her Majesty’s Secret Service, will be live on stage, which will be the first time in 60 years of James Bond that a James Bond 007 actor has appeared in a concert tour featuring the songs and music from the James Bond movies.

“I’m really looking forward to returning to Australia in September to be part of the Music of James Bond and to relive John Barry’s beautiful music from On Her Majesty’s Secret Service. Louis Armstrong’s title song ‘We Have All the Time in the World’, originally featured in OHMSS and again in last year’s No Time To Die, will be sensational with the big Orchestras. It’s wonderful that the concerts will feature great Australian performers who will bring the brilliant and iconic songs from the James Bond movies to life. And during my interviews on stage, I’m looking forward to sharing with audiences’ stories from the world of Bond”, said George Lazenby.

“As a lifetime James Bond tragic, I am so excited that Australia’s only James Bond, George Lazenby, will be live on stage. We are so fortunate to have secured brilliant performers Bonnie Anderson and Luke Kennedy. So many singers showed interest in joining George and the Symphony Orchestras, which is still continuing with requests to perform as special guests. There is no doubt that the big orchestras and the opportunity to be on stage with one of only six James Bond actors in 60 years is an exciting prospect for many performers” said producer Paul Fanning.

Born in Goulburn, George Lazenby’s peripatetic life led him to London and international stardom as Ian Fleming’s James Bond in On Her Majesty’s Secret Service (1969) taking over from Sean Connery. Although a worldwide critical and financial success, George relinquished the role of 007 to carve out his own spiritual adventure in life in the Far East and the United States working with filmmakers as varied as Peter Bogdanovitch, Cy Endfield, John Landis and Raymond Chow.

Singer, actor and writer Bonnie Anderson is a dynamic, versatile and creative artist. She won hearts and stole the show at the age of 12 winning the first ever season of Australia’s Got Talent in 2007 and has continued her successes, with career highlights including her successful debut single Raise the Bar released in 2013 followed by her first top 20 hit Blackout that went Platinum in 2014. In 2018, Bonnie joined the cast of Neighbours and was nominated for Most Popular New Talent at the Logie Awards. In 2020 she won Network Ten’s top rating entertainment show The Masked Singer, and in 2021 she faced one her biggest mental and physical challenges, when she joined the cast of Channel 7’s top rating reality show, SAS Australia.

Luke Kennedy shot to international attention in 2013 as Ricky Martin’s grand finalist on Season 2 of The Voice Australia. As series runner-up, Luke was the first artist to secure a #1 single on the iTunes charts with Time To Say Goodbye and his debut album, A Time For Us, debuted at #6 on the ARIA charts. Luke performed with Ricky Martin as a special guest on his 2013 Australian tour following the series. Luke has extensive international touring experience with The TEN Tenors and is a founding member of the big band supergroup Swing On This.

Conductor Nicholas Buc is a highly respected composer, conductor, pianist and violinist who conducted numerous live-in-concert world premieres including John Williams’ Star Wars: The Last Jedi, Hans Zimmer’s The Lion King (2019), Beauty and the Beast (2017), Nicholas Hooper’s Harry Potter and the Half-Blood Prince and Alexandre Desplat’s Harry Potter and the Deathly Hallows Part 2, as well as the North American premiere of John Powell’s How To Train You Dragon. He has conducted all of the major Australian symphony orchestras and makes regular appearances in Asia, conducting the Tokyo, Hong Kong, Malaysian, Osaka and Taipei Philharmonic orchestras.

The James Bond songs are every bit as irresistible as James Bond himself and include No Time to Die, The Writings on the Wall, Goldfinger, From Russia with Love, Live and Let Die, Diamonds are Forever, Skyfall and of course We Have All The Time in the World from the movie George starred in: On Her Majesty’s Secret Service.

Surprise Dad with tickets for Father’s Day, and he can hear the James Bond songs and secret stories from a former James Bond himself, all in one evening. It’s bound to be a sophisticated secret spy mission with Lazenby…George Lazenby.

The Music of James Bond