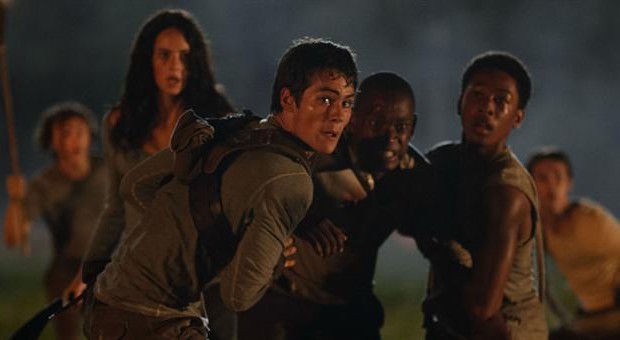 When we hear one of these sayings in a young adult film at this present time, it means the absolute opposite. The film’s likely to be no different from the rest. The idea of a group of teenagers in a dystopian society, battling to survive under a watchful eye, is becoming old fast and if the film has to be made, it has to be made with a certain degree of originality and point of difference. The Maze Runner is by no means a completely lost cause, but does not evoke any grand emotions or feelings of awe in the viewer. Fast paced, thrilling action sequences and impressive production design, do little to save a weak screenplay that provides nowhere near as much intrigue for an unpredictable story as it should.

Waking up in an elevator with a group of teenage boys jeering him does little to comfort the fact that Thomas (Dylan O’Brien) has no recollection of who he is or how he came to be in this situation. He soon finds out that he is now part of a group of boys who started much like him, waking up with no recollection and finding themselves in a vast space surrounded by a maze which stops them from leaving with it’s deadly terrors and ability to change it’s course at night. The boys already have their system of hierarchy and methods of survival, but when Thomas enters the arena everything starts to change. The game rules change and the boys have to adapt in order to not only survive, but understand the reason for their existence.

While The Maze Runner is in fact quiet suspenseful in several high paced scenes and continuously unpredictable, it surprisingly lacks intrigue and conviction. While the screenplay isn’t particularly strong as it relies a great deal on it’s action sequences to build suspense and contains rather simplistic and lousy dialogue, it’s the story that we feel we have heard so many times before which is the reason for the film failing to hit its mark. The Maze Runner feels like a cross between The Hunger Games and Lord of the Flies and this feeling of deja vu takes out much of the interest in the film. Another trap several YA films have fallen into with their optimism of upcoming success, is believing that there will be a sequel and therefore leaving the film hanging on a note that doesn’t make much sense to those who haven’t read the book from which it is adapted. This is a method Vampire Academy used earlier this year and The Maze Runner also has now. It did work for The Hunger Games and Divergent, but not in this case where a sequel isn’t guaranteed. Instead, it leaves the viewer feeling like what they watched didn’t make as much sense as what they thought it did. 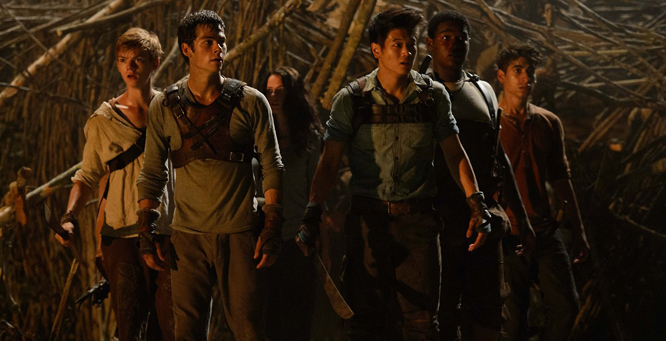 However, the production design of the film is extremely impressive. Director Wes Ball is better known for his film work in visual effects and in this film that is evidently where his strength lies. The maze design is wonderfully complex, atmospheric and daunting. The CGI is very good for the most part, but does have its obvious green screen moments. The beginning sequence will be a terrible start for those members of the audience who do not like rides and suffer from motion sickness.

Unfortunately, the cast of The Maze Runner are not given much to work with. The characters are exceptionally one-dimensional and stereotypical for such a film and form no real emotional attachment to the audience. It really is a shame as each actor does as much as they possibly can with the material given to them and there is no doubt that they are fine actors, but they are not given the material to shine with here. Dylan O’Brien is fine in the lead as Thomas. His performance is somewhat tedious until the final few scenes of the film when he is finally able to show some real emotion and then he is wonderful. The same can be said for Will Poulter in playing clan bully, Gally. A stereotypical role for Poulter and doesn’t get particularly interesting until right at the end.

It is not so much the lack of originality involved with The Maze Runner story that makes it unmemorable, but the lack of emotional connection to the film and its characters. The outstanding production design and intensity of some of the key scenes are not enough to set this film apart from the crowd.

Summary: Fast paced, thrilling action sequences and impressive production design, do little to save a weak screenplay that provides nowhere near as much intrigue for an unpredictable story as it should.