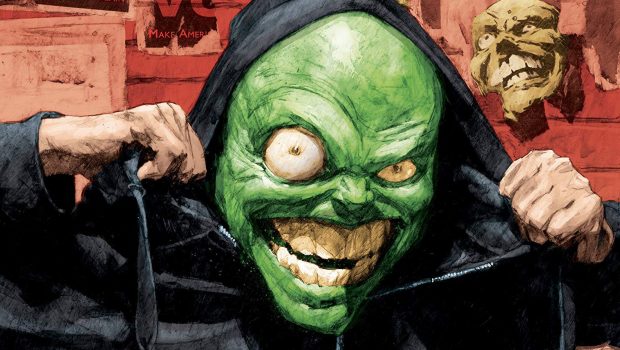 The Mask: I Pledge Allegiance to the Mask #1

The Mask: I Pledge Allegiance to the Mask #1 Tim Chuma
Score

Summary: A follow-up series to the classic story of the Mask. Fits well into both the comic and film continuity.

Set 30 years after the events of the previous comic trilogy, once again a mysterious killer appears in the city and takes out his victims in wacky cartoon style ways. Some of the characters from the original story have moved on with their lives but still remember what happen all those years ago.

The theme of the story is meant to be a satire of the Trump Whitehouse but that is impossible to do since he self-parodies. It is an interesting spin on it however since one of the main characters is a senator who is seeking underhanded ways to get into politics.

While I am a big fan of the original movie starring Jim Carey I had never read the original comics (now coming out in an omnibus format) and wondered if this would be has gory and as weird as I had heard the original ones where.

It has that in spades with some gruesome, yet funny deaths thanks to the Mask and other violent scenes on a golf course and one character who cuts off his own ear and eats it for no real reason.

Christopher Cantwell (Halt and Catch Fire), does a great job with the story, which seems to start off a bit slow at first but picks up when you meet more of the characters. As you would expect it does not have as much action due to everything just being established but there are a lot of things set up that look promising.

Patric Reynolds’ (Hellboy, Joe Golem) art style is interesting and suits the story well. There are some gory scenes in the comic but they are not overstated and while it has a cartoonish nature there is still a lot of grit in the scenes.

This has the makings of a great comic series, but I would wait until some more of them have come out as you want to keep reading it straight away.