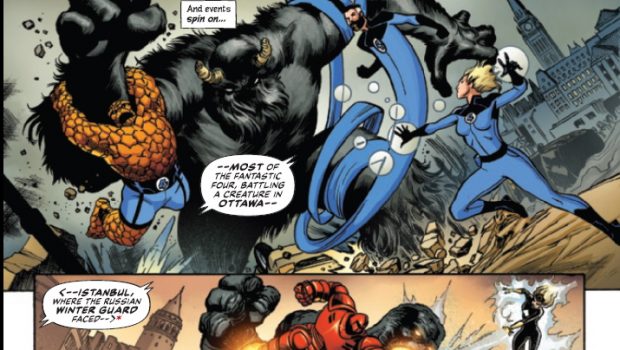 Summary: There is something going on here, I just can't work out what it is or why I should be involved with the story.

As part of some grand, over-arching story, Spider-Man, Captain America, Iron Man, Storm, Dr Strange and Warbird amongst others are teaming up against some unspecified foe. I could not make head nor tail of what is going on here as you really do have to have read the previous entries in this storyline to get what is going on.

The best thing I could say is that at least this one is restricted to its own entry and you don’t have to buy a bunch of other comics to get what is going on.

A bit difficult to know who this series is aimed at as it doesn’t really have enough of each of the main characters for it to be marketed just on having that particular hero in it.

There is a bit of introductory text but it also assumes you know who everyone is already and know how they fit into this particular storyline. Any comic that requires you read a wiki first is not really something I would be interested in. By all means read the wiki after to find some more information about the character but pre-reading should not be a requirement.

Can’t really see what they are going for here? Maybe if you are into some of the characters and want to see them doing a different storyline.