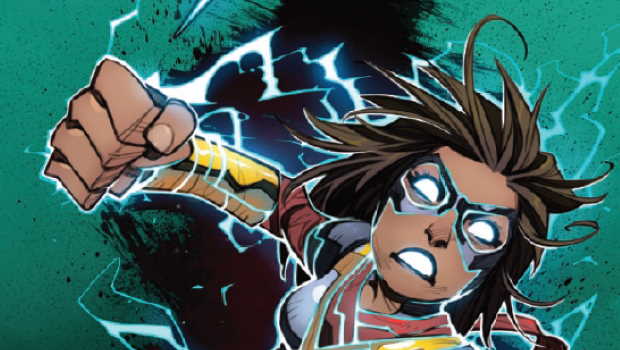 Summary: When we think of superheroes, we mostly think about the cool powers and saving people. What we tend to overlook is sometimes a choice has to be made and that choice can lead to an unwanted conclusion.

With her father in hospital fighting for his life and her new nanotech costume taking on a life of it’s own, Kamala is forced to choose between her heart and her heroic duties.

There’s a hint that this may be the time for comics to be more overt with their story telling. In this issue Kamala is more or less literally fighting her “inner demon”. Her nanotech costume has taken on a life of it’s own, is calling itself Stormranger and seems to be a more extreme version of herself… extreme in that it seems to think the best way to end a threat is to exterminate the threat. This doesn’t gel with Kamala’s ideals and so she is forced to battle her artificial self. But what would a great comic story be if our hero isn’t torn between their heroic life and their more mundane life? In this case Ms Marvel’s father is fighting for his life and she would love to be there with him… but with Mr Hyde subdued and now under threat from Stormranger, Kamala must make some tough decisions.

I’m not a big fan of the artwork here. But I want to be clear, that’s a purely personal aesthetic taste thing, the artwork is perfectly good, it’s jut not my cup of tea. It actually reminds me quite a bit of Liquid Television, the old series from MTV. Having said that, that series was on from 1991 to 1994 so my recollection is probably a bit fuzzy there. I did quite enjoy the little visual gag when Ms Marvel comes across some “civilians” while being heroic… but without her suit. I won’t ruin it, but it’s a chuckle worthy panel.

Everyone (I assume) struggles with their inner voice, their inner demons from time to time.  Making that inner demon and external entity that can actually kick your butt… that’s probably not something many of us are every likely to face. For some people it will be too literal and possibly cringeworthy, for others it will just form a visual representation of the internal struggle we can relate to. If you are new to Ms Marvel (as to a large extent I am, having only really known bits of her from peripheral material to date), it might be a bit like being thrown in the deep end with this issue, so it’s perhaps not the best place to start your Ms Marvel journey. If you are a regular reader then you will probably want to grab this to continue your collection.