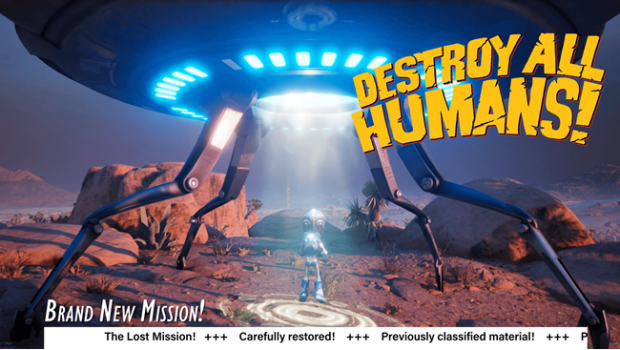 The Lost Mission: A Teaser for Destroy All Humans! New Leve

Destroy All Humans! is a remake of the beloved 2005 video game classic. Developer Black Forest Games has massively upgraded the graphics, with the game being created completely in Unreal Engine 4. Among new visuals, also the controls have been modernised and some interesting new content was added, special challenges after a mission of the campaign is completed for example.

BUT … there is one lost mission. The dev team found – hidden deep in the archives of Pandemic Studios – an unreleased mission in the middle of the campaign. This mission has been restored and finalised and will be part of Destroy All Humans! coming on July 28th for PlayStation®4, Xbox One™ and PC.

Watch the teaser for the lost mission: https://youtu.be/LhxPFL0ebnE

Crypto’s Weapons Detailed
In his new video series, Cryptosporidium-137 is delighted to show off his fine arsenal for the extermination of mankind. Starting with the “Disintegration Ray”, you will find a new weapon showcased every week on THQ Nordic’s YouTube-Channel: http://n.thq.com/atya30qYyxB

Welcome to …
Crypto’s adventures leading him to some interesting fictional places in the United States of the flaming 50s. In the new “welcome to” series, THQ Nordic will present the famous locations one by one, from the Turnipseed Farm and Santa Modesta to Area 42 and Capitol City. All “welcome to” videos are available on THQ Nordic’s YouTube-Channel: http://n.thq.com/2VMF30qYyxH

Free Demo Available
We know, most of you humanoids can’t wait to witness the glory of the Furon Empire by themselves. So here is your chance, play the Destroy All Humans! Demo for PC today, you can download it via Steam or Gog.com:

The Crypto-137 Edition, featuring a Crypto-137 figurine, a Crypto backpack, keychain, six lithographs, anti-stress toy and all in-game Crypto skins, all contained within a premium box, is available for pre-order now and has an SRP of $599.95 / seven tons of mutilated cow corpse juice’s worth of Crypto currency.
Check out the new trailer of the Crypto-137 Edition: https://youtu.be/8XFKjgBIEow

The DNA Collector’s Edition, featuring a Crypto’N’Cow figurine, keychain, six lithographs, anti-stress toy, and all in-game Crypto skins, all contained within a premium box, is available for pre-order now and has an SRP of $249.95 / twelve charred human femurs’ worth of Crypto currency.
Check out the new trailer of the DNA Edition: https://youtu.be/0hQ5os5wGm0

About Destroy All Humans!

The cult-classic returns and invades everything but your privacy on July 28 2020! Terrorise the people of 1950s Earth in the role of the evil alien Crypto-137. Harvest DNA and bring down the US government in the remake of the legendary alien invasion action adventure. Annihilate puny humans using an assortment of alien weaponry and psychic abilities. Reduce their cities to rubble with your flying Saucer!

One giant step on mankind!

Destroy All Humans! is a cult classic and one of the few games that will have you laughing out loud. Many games have taken inspiration from its mix of humoristic story-telling and easily accessible open world shooter action, as well as its wide range of over-the-top weaponry. But there can only be one Cryptosporidium: the human-hating alien with the voice of an angry Jack Nicholson and a shorter fuse than a xenomorph on steroids.

Step right up and enjoy the show!

Only Destroy All Humans! allows you to explore idyllic US cities of the 1950s, read the thoughts of their citizens to uncover their secret desires… and then burn the very same cities to the ground with the mighty Death Ray of your flying saucer!