Summary: The Legend of Zelda: Link's Awakening is a sensational remake of this Game Boy Classic

The Legend of Zelda: Link’s Awakening has been my gaming white whale since childhood. Dozens of AA batteries were churned through as I spent countless hours playing this Game Boy classic when I was younger. Yet despite my best efforts, I was never able to actually beat the game and it has haunted me for all these years. Now that Zelda: Link’s Awakening has been remade for the Switch, not only have I finally been able to achieve this dream, I’ve also realised why I wasn’t able to beat it as a kid: this game is still absurdly difficult. 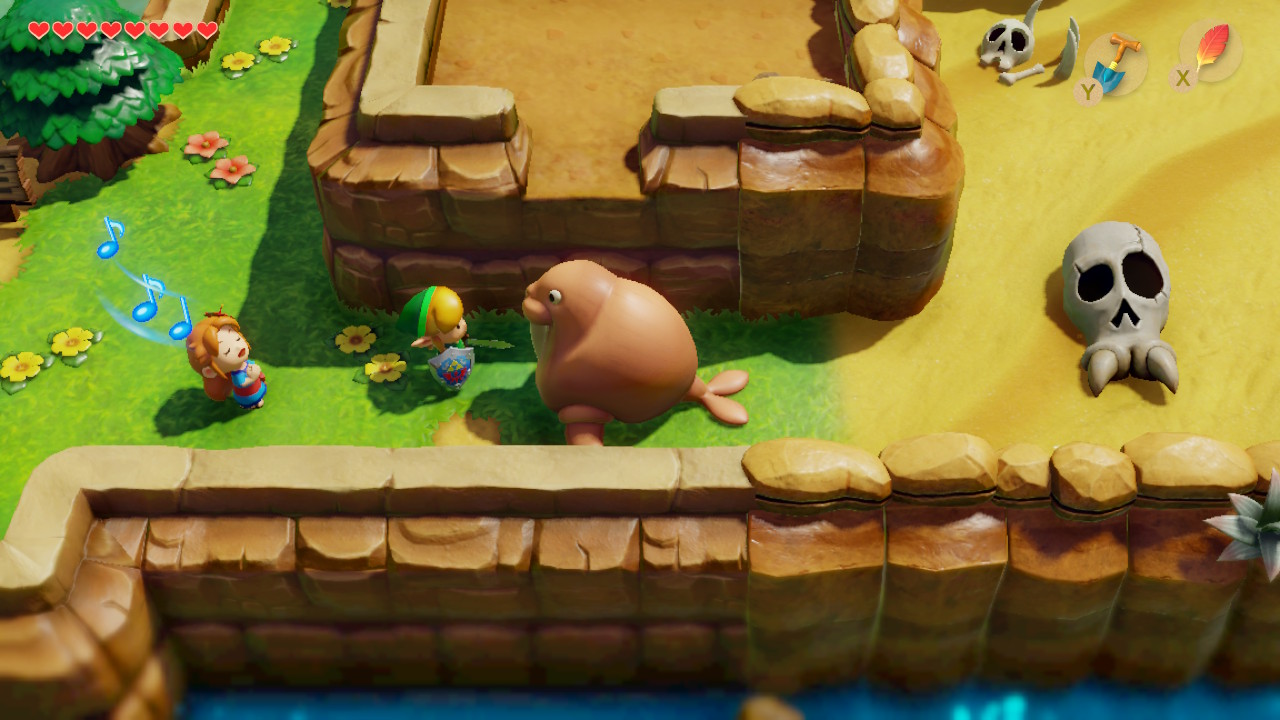 I think we’ve reached the point where we need to clarify what kind of Zelda franchise rerelease we are dealing with, because something of a hierarchy has been established. On the bottom tiers you’ve got the uninspired Ocarina of Time: Master Quest rerelease, which simply mirrored the dungeons and tweaked the difficulty. On the upper echelons you’ve got the superb Windwaker rerelease, which improved the graphics and altered the end game to be less of a chore. The remake of Link’s Awakening deserves it’s own tier at the top of this hierarchy, as it surpasses Windwaker for the title of most impressive Zelda rerelease because the game has been completely rebuilt from the ground up with outstanding aesthetic design and a tonne of gameplay improvements. 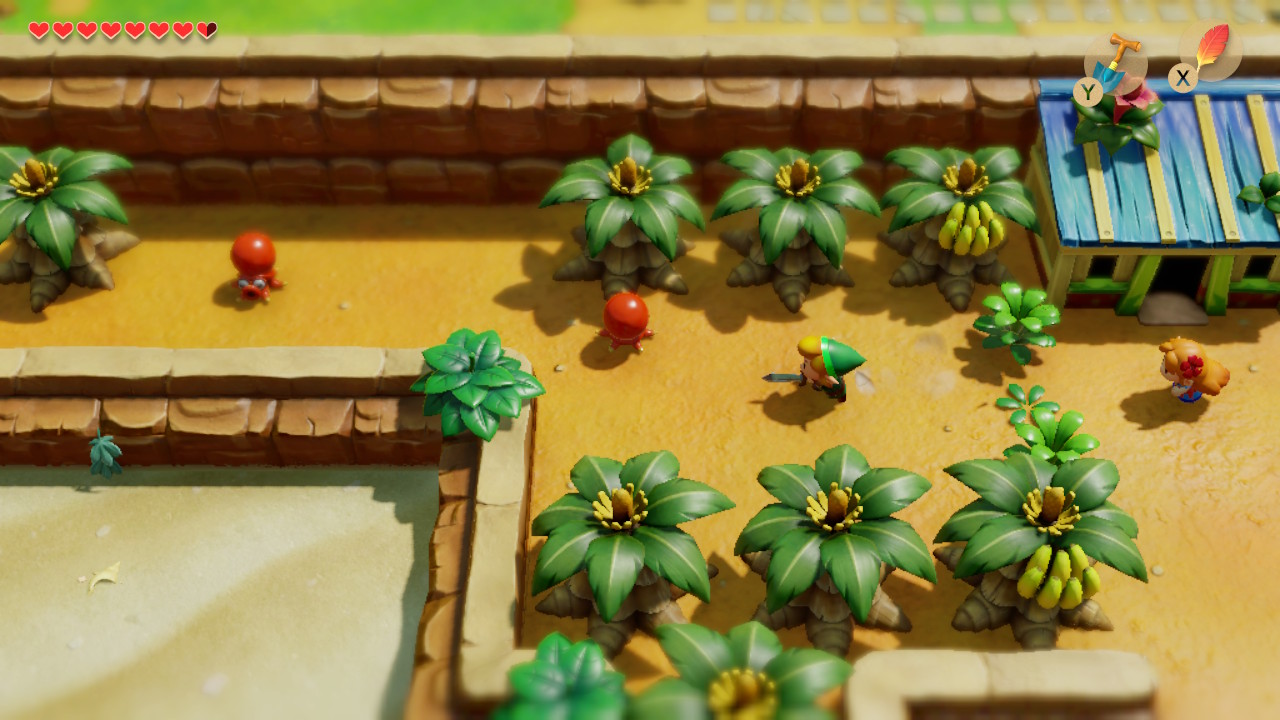 But before we get into all the new stuff, here’s a quick explainer to catch up those that may be unfamiliar with the history of Link’s Awakening. The Legend of Zelda: Link’s Awakening is a top-down 2D Zelda game that was originally released in 1993 for the Game Boy. It was later rereleased for the Game Boy Colour with the title Link’s Awakening DX, which featured colour graphics and a new dungeon. The game follows the story of Link as he shipwrecks on a strange new island and must complete a handful of dungeons in order to summon the Wind Fish to secure his return to Hyrule. 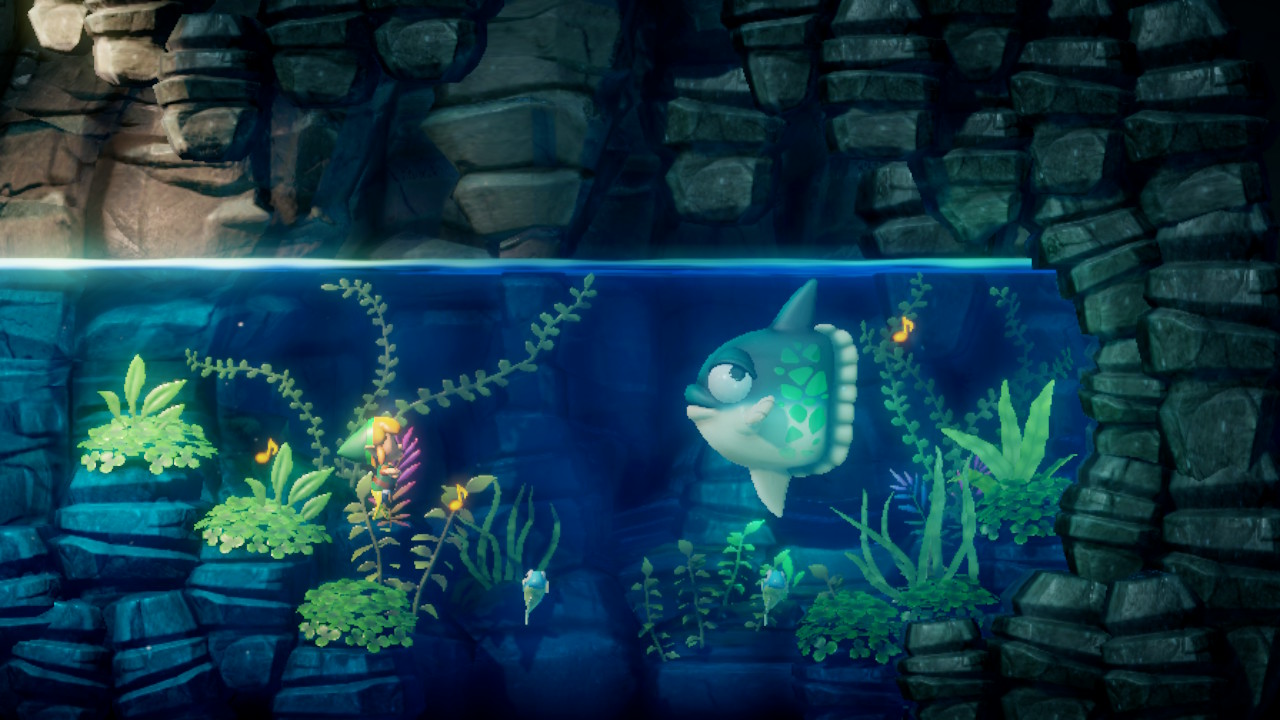 The most impressive feature of the remake of Link’s Awakening is one that you’ll notice as soon as you load into the game. The graphical stylings in this game are downright incredible. Every character, every enemy, every item – heck, even every tree in the game world looks like it belongs in a children’s toy set. It’s all adorably rendered with bright colours and smooth, plastic-looking textures, and when combined with the pseudo-tiltshift effect used throughout the game, the motif looks absolutely stunning. 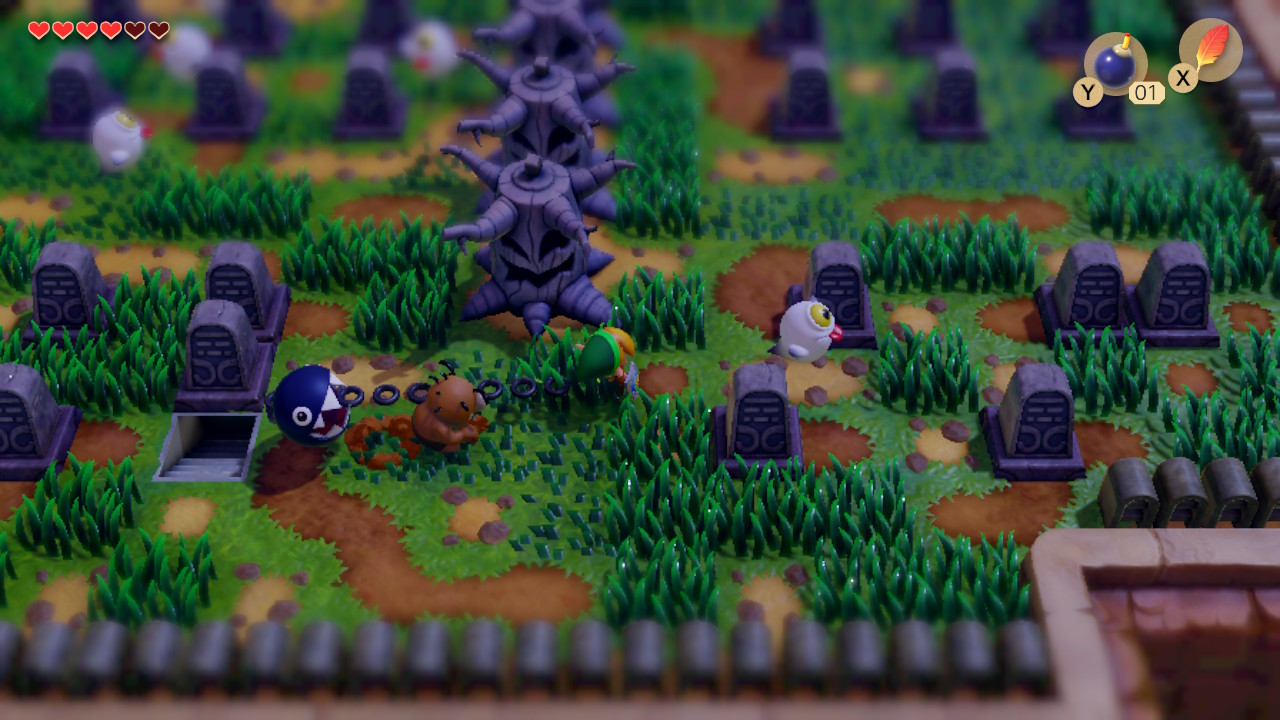 The graphical stylings are an astounding effort to reimagine the game world that you remember exploring as a child, whilst also presenting a game that looks impressive by modern standards. Unfortunately, these impressive graphics come at a cost to the Switch’s processing power when played in portable mode. Expect noticeable frame rate dips whenever you enter larger areas on the map or rooms filled with multiple enemies. By no means did these frame rate issues make the game unplayable, but when everything else looks so good, it’s hard not to get hung up on this sort of issue. 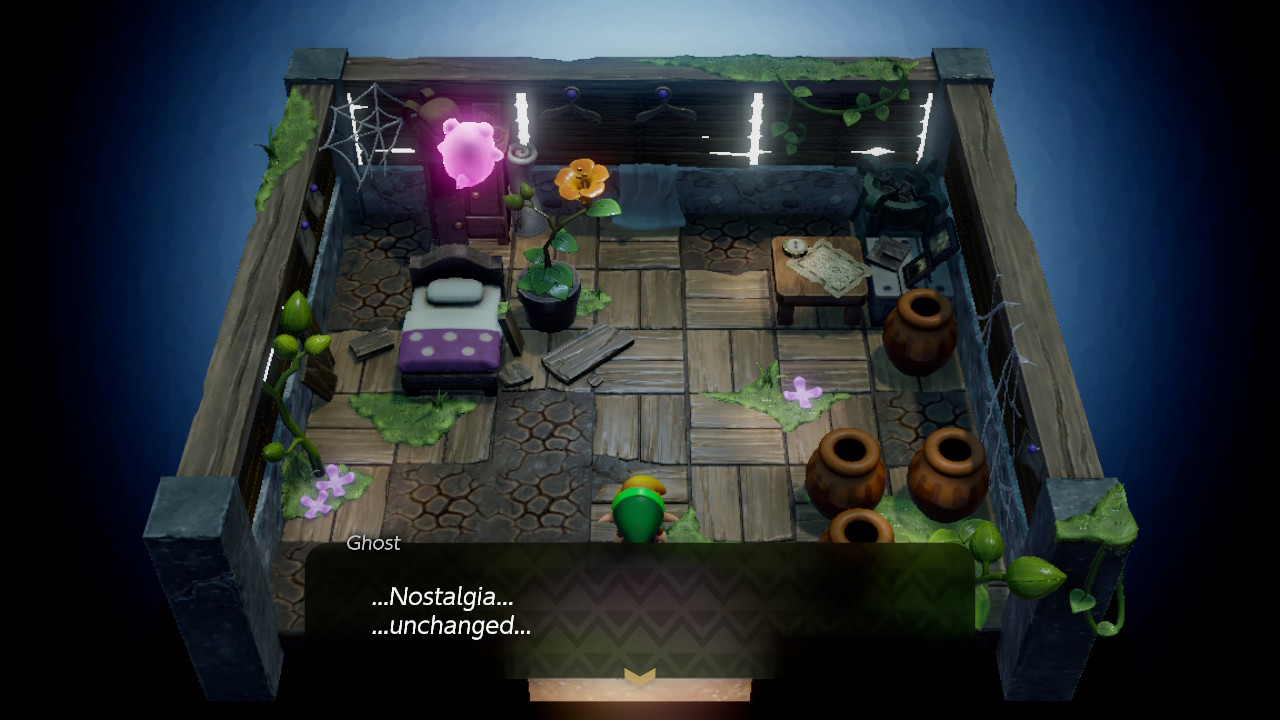 Almost equally as impressive as the reimagined graphics is the new soundtrack remixes of classic Link’s Awakening tunes that have been added to the game. There’s a fantastic variety of tracks on offer ranging from subtle acoustic renditions to full orchestral compositions of the tracks you’ll instantly recognise if you played the original Game Boy game. As a side note, I would love to see these tracks added to the Smash Bros. library, particularly the Animal Village theme. 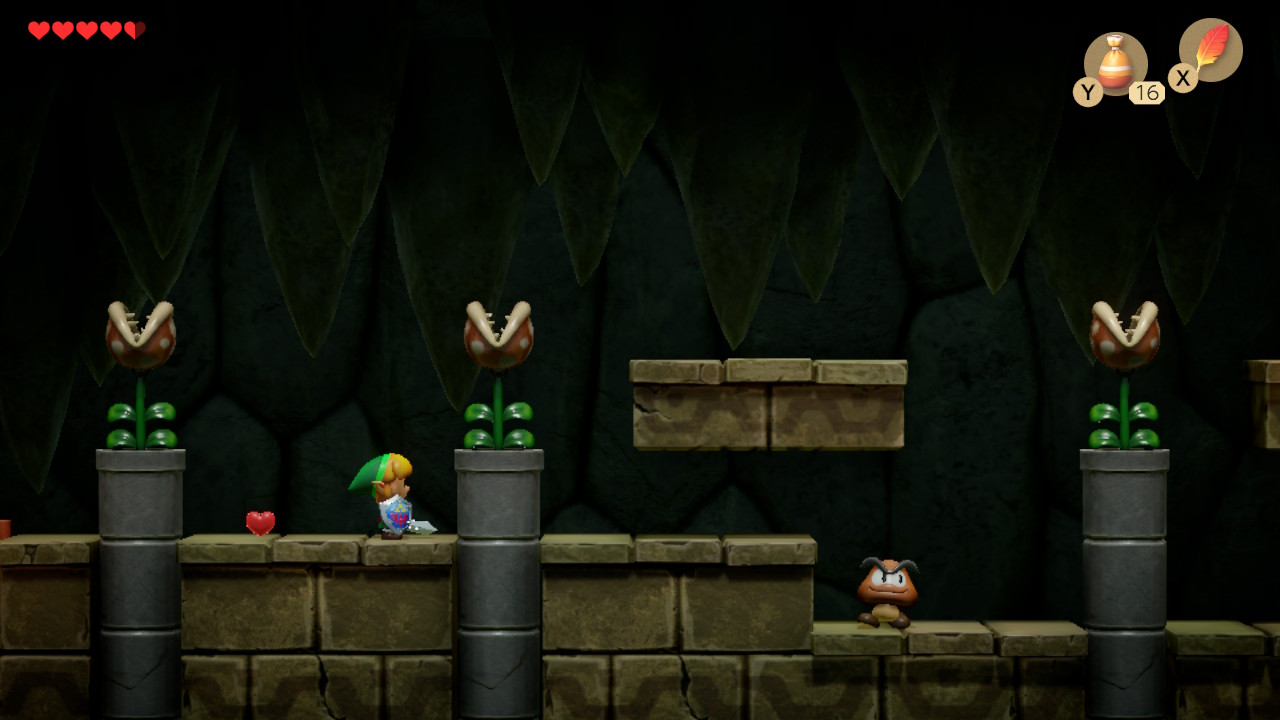 Next on the list of most notable features added to the Link’s Awakening remake is the huge list of gameplay improvements added to the base game. Game design philosophy has come a long way in the past 26 years, so when you’re revitalising a title from a by-gone era for a mass market, a few gameplay tweaks are almost a necessity to bring the game up to modern standards. Nintendo have clearly come to this realisation as well and have done a great job adding a whole swath of new gameplay features to make Link’s quest a lot smoother. 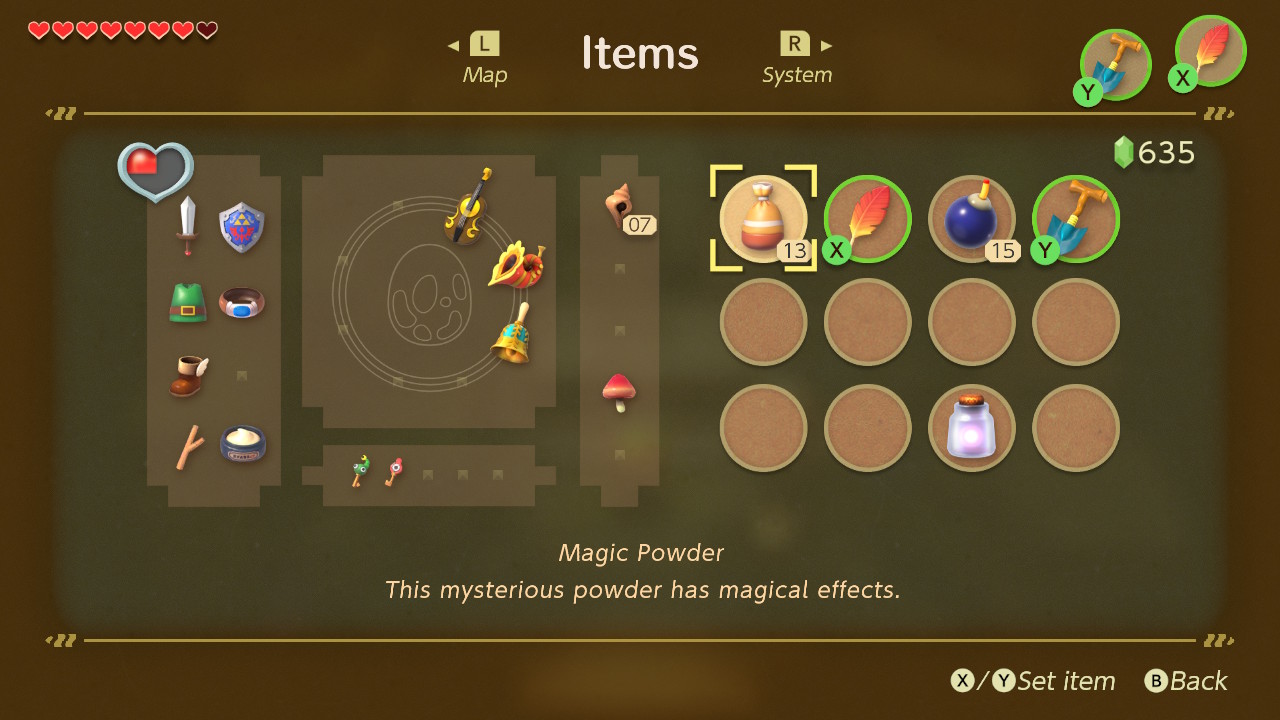 There are simply far too many additional features added to go through them all, but I’ll mention a few of my favourites. By far the most helpful addition is the inclusion of a highly detailed world map. All of Koholint Island is rendered on the world map screen and when zoomed in, you can clearly identify individual houses or even the different types of boulders blocking the paths. The map also lightly highlights the area of the island that you should head to next on your quest. Also, the map marker system from Breath of The Wild had been implemented, which allows you to place your own icons on the map, which is a huge help too. 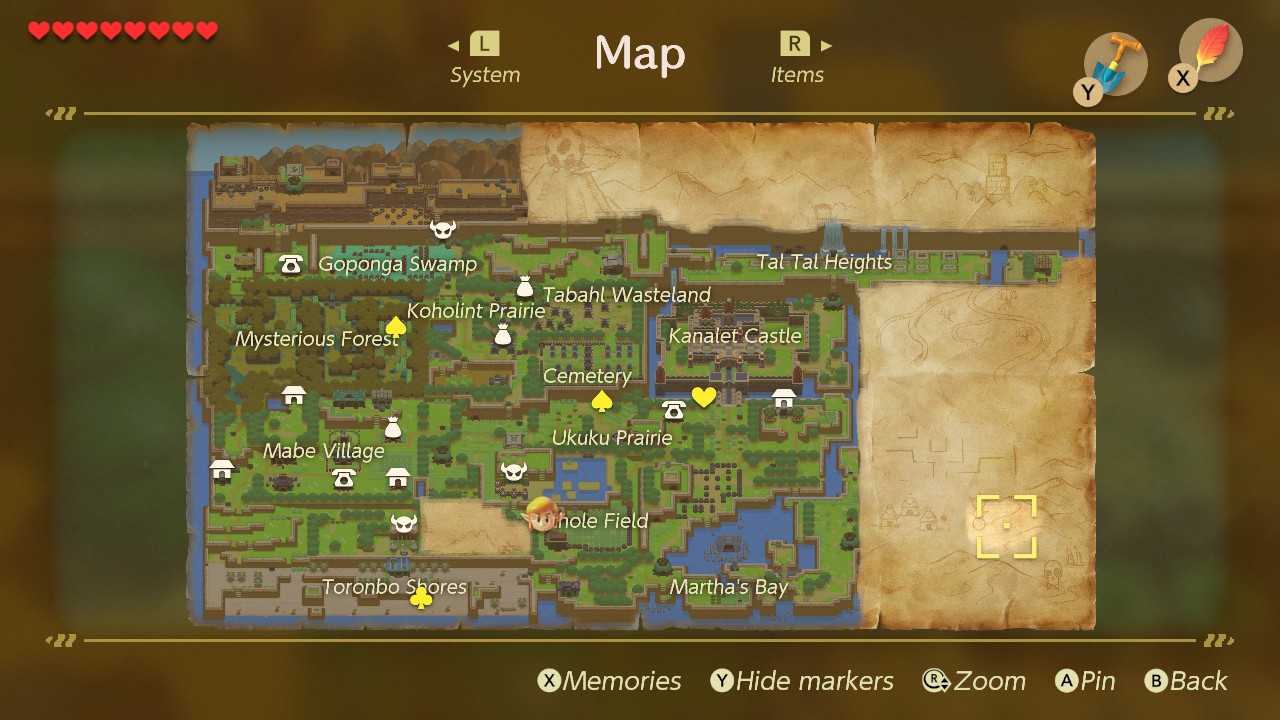 Other additional gameplay features added to the Link’s Awakening remake are the inclusion of bottles that can be used to capture fairies, plenty more fast travel points around the map and Nintendo have also added additional heart containers and seashells for you to collect around the world. As for some more subtle but extremely useful new features, the compass now plays a chime whenever you’re in a room with a key nearby in a dungeon, plus you can see a list of all the story-related dialogue exchanges at any time in the pause menu. So if you forget where you’re supposed to be going next, you can always go back and check the last thing the wise old owl told you. to help steer you in the right direction. 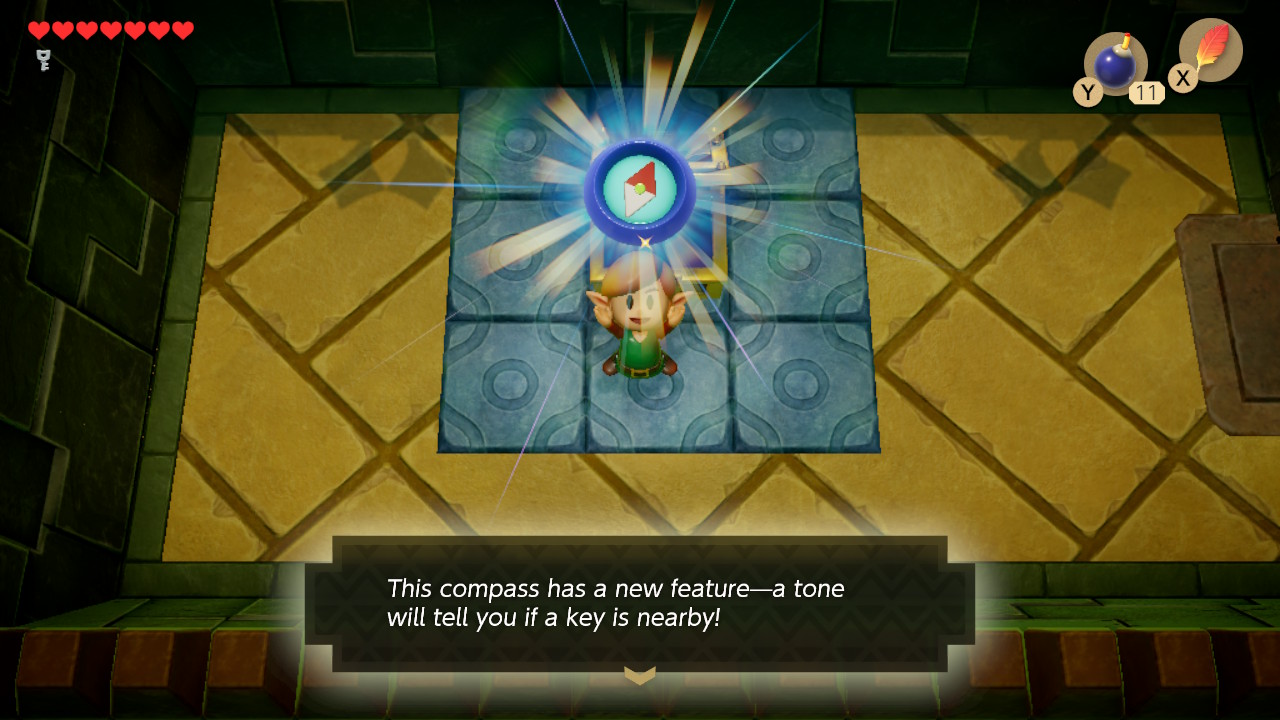 These last two points may seem insignificant compared to the list of other new features, but they’re actually rather important because they help to slightly alleviate what is my biggest nitpick with the Link’s Awakening remake. Despite the shiny new graphics and the new physics engine, this is still a 26-year-old game at its core, and one that comes from an era when Zelda games were not at all what they are today. This is a game that will let you walk into a boss fight, even if you don’t have the essential item you need to defeat that boss. This is a game where you will frequently find the boss key in a dungeon before you have found the map or the compass. To put it simply, this is a game that you will probably need to consult a walkthrough to figure out what to do next at some point. 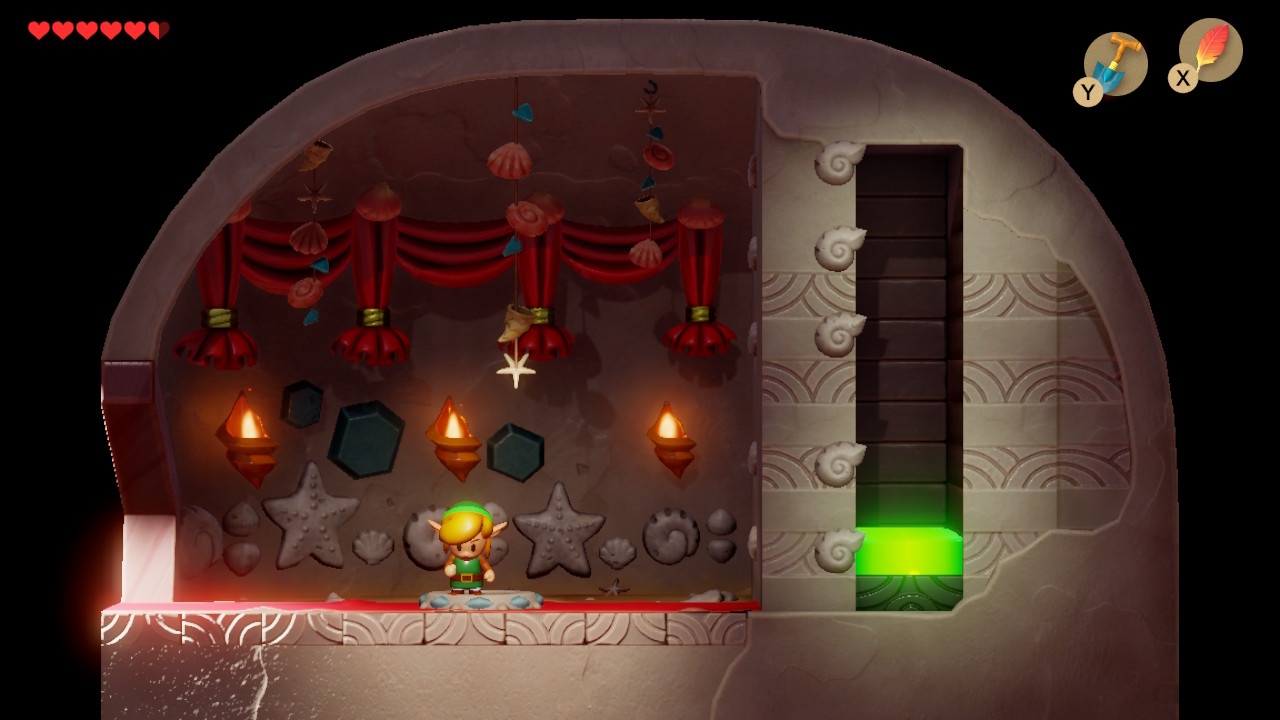 For some players, this type of challenge will be exactly what they are looking for. Some players will enjoy exploring every corner of the map, talking to every character and taking the time to figure everything out for themselves. For other players that are more used to the recent Zelda titles where you can always ask your companion where to go next, the Link’s Awakening remake is likely to be a little frustrating at times. I personally fall somewhere between these two categories – thankfully there is 26 years worth of walkthroughs available online so you won’t have any trouble finding a solution to any problems you run into. 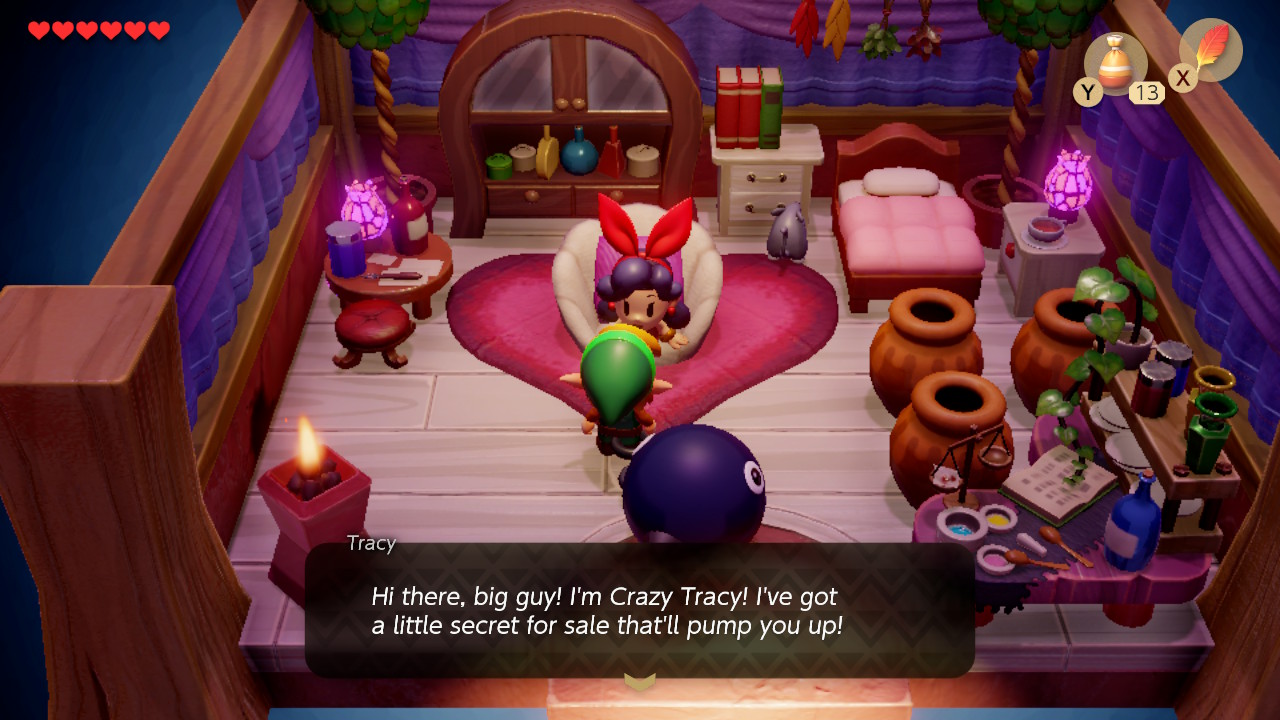 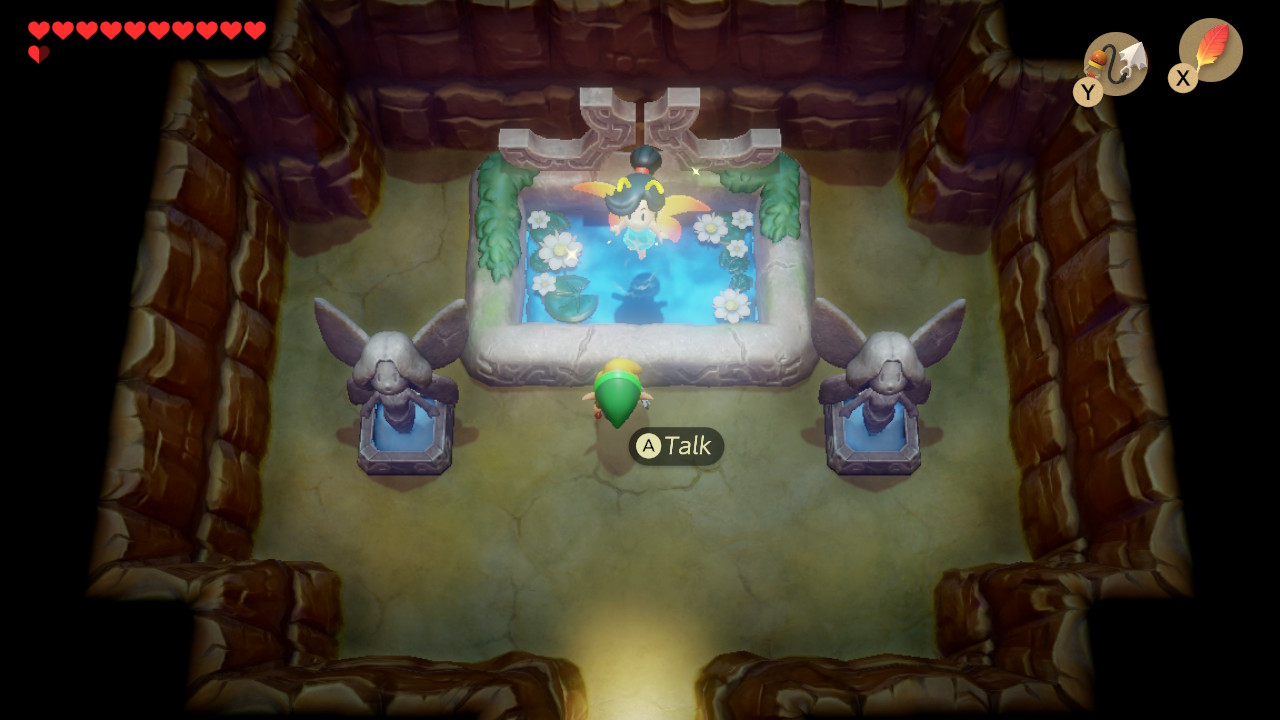 If the dungeons in Link’s Awakening leave you feeling hungry for more, don’t fret because Nintendo have included a dungeon creator mode, which allows you to create your own custom dungeons to explore. The mode allows you to string together a bunch of pre-made chambers on a grid to create your own dungeon using rooms you’ve already explored in previous dungeons in the game. Dampe, the dungeon master will also offer challenges for you to complete by creating custom dungeons that fulfill certain criteria and then beating them for a reward. This mode is by no means the Zelda flavoured Mario Maker that some were hoping for, but it’s a fun side challenge nonetheless. 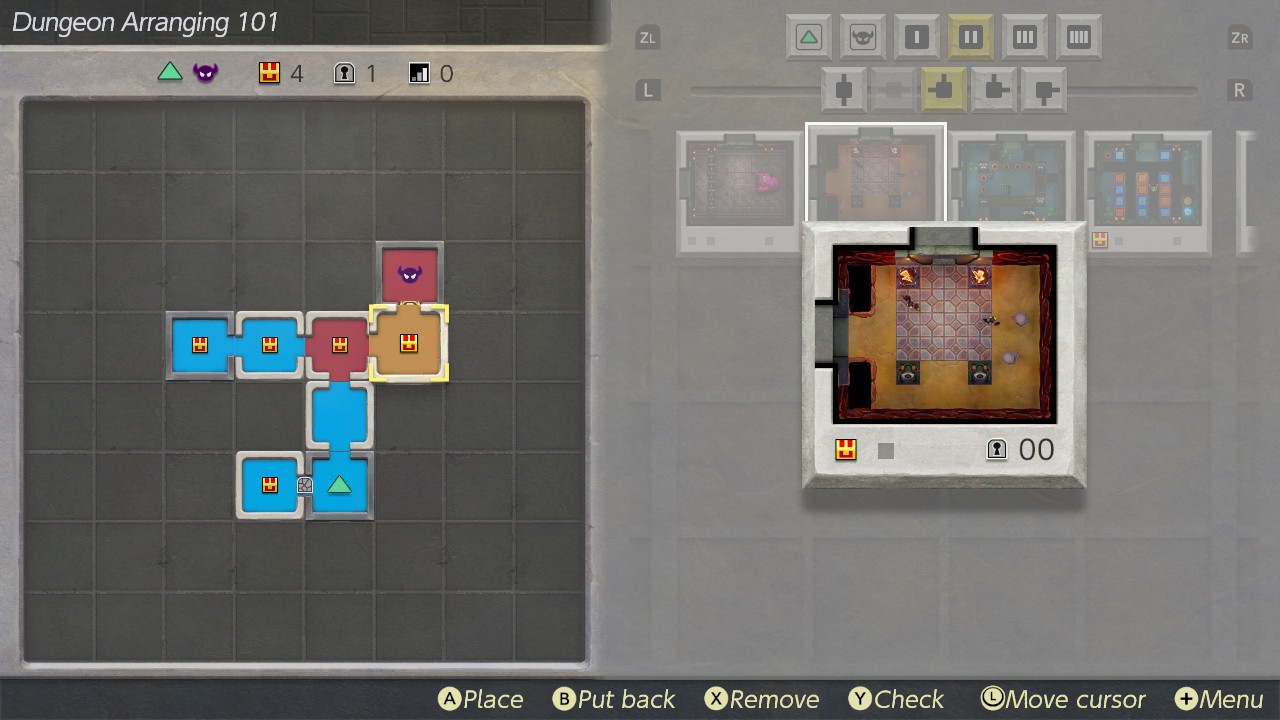 The Legend of Zelda: Link’s Awakening remake is undeniably impressive. Despite some frame rate issues, the graphical overhaul is absolutely spectacular and the soundtrack has been brought to life in a truly remarkable way. Yet at the end of the day, this is a remake of a Zelda game from a different time. Plenty of additional gameplay features have been added to make the gameplay experience more palatable by modern standards, but it may not be enough for some players – particularly if you don’t care for the older 2D Zelda games. I will still easily recommend this to anyone that owns a Switch, even if the game can be a little frustrating at times. 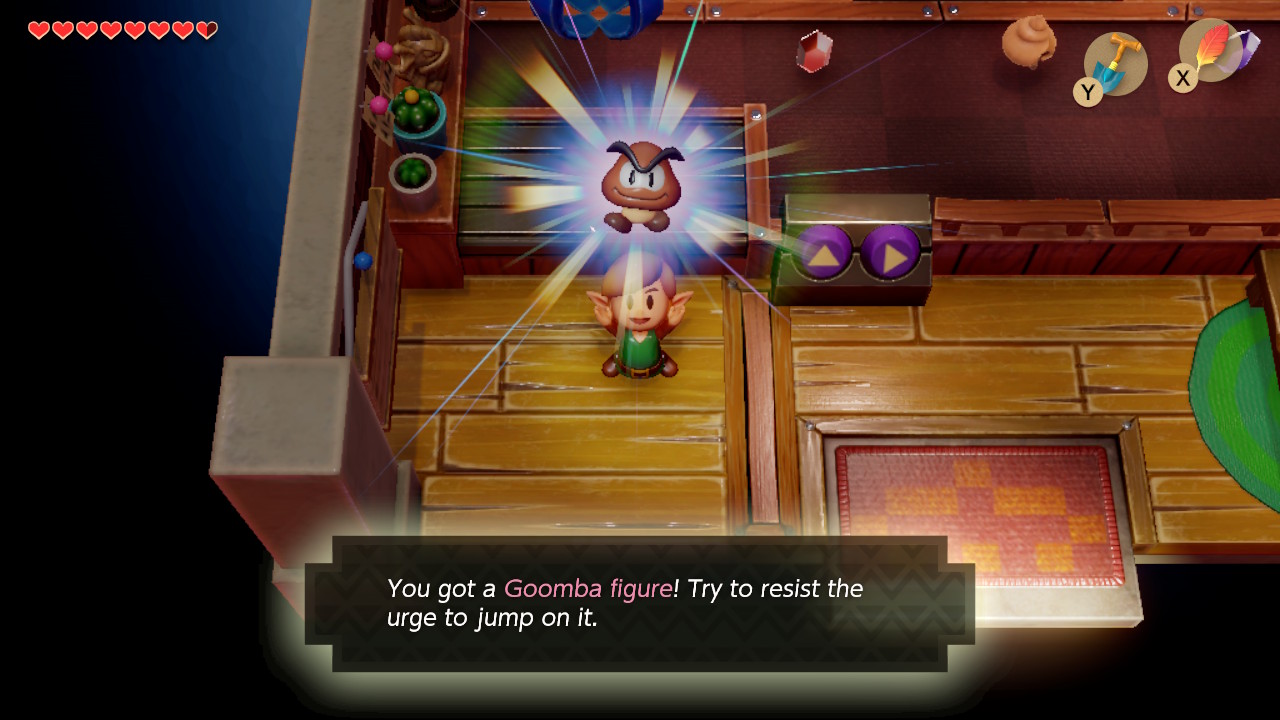