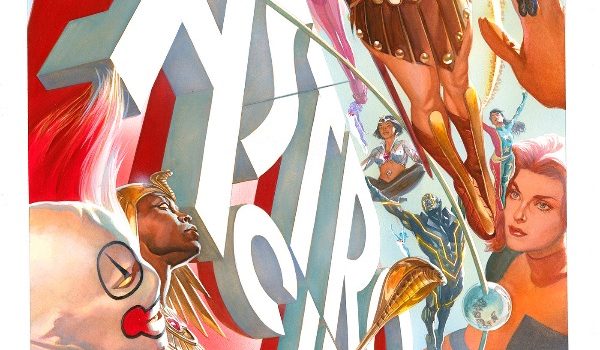 Kurt Busiek, the bestselling writer of Avengers, Superman, Thunderbolts, Iron Man, JLA, and more, is returning to Image in a big way in 2022, with new entries in fan-favorite series, including Astro City, Arrowsmith and others, plus new creations and more, as he brings his creator-owned work to Image Comics as his primary publisher. 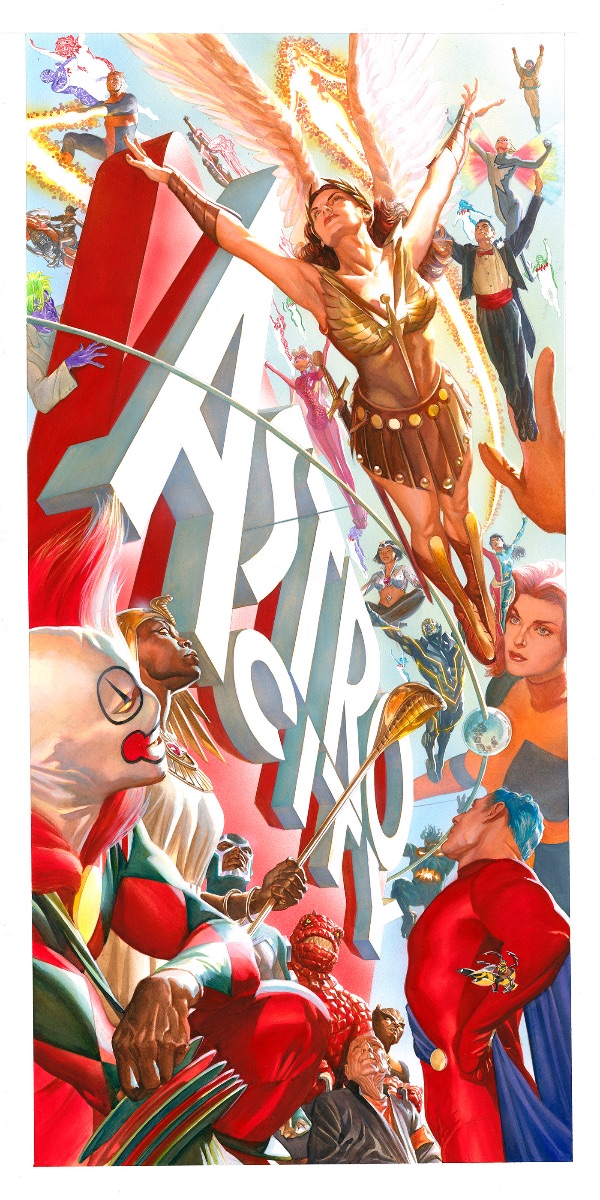 “I’m thrilled to be back at Image and glad to be working with Eric Stephenson and the whole crew here,” said Busiek. “Image is the best comics publisher for creator-owned work, so it’s very nice to be bringing my books together here, where they can be available as a group, supported by the team here—and sitting alongside such great series as Saga, The Walking Dead, Criminal, Savage Dragon and so many more. And not just because Image is only about twenty minutes from where I live, so I can actually drop by the place, once the pandemic is in the rearview. My creative partners and I are looking forward to a having a home for the work we’re doing now and lots of new ideas to come.”

Chief Creative Officer and Publisher at Image Comics, Eric Stephenson, is just as excited Kurt is making the move to Image. “When I was editing comics for Extreme Studios back in the ’90s, one of my big regrets was that I couldn’t close the deal on getting Kurt Busiek to write Supreme, so working with Kurt to make Image the home for all of his creator-owned work—from Astro City to Arrowsmith to Autumnlands and more—has been nothing short of a thrill. In addition to being one of comics’ finest writers, Kurt is also a magnet for equally talented artists, and we couldn’t be happier to see the Image ‘i’ on work by the likes of Carlos Pacheco, Brent Anderson, Alex Ross, Ben Dewey, Stephen Mooney, Jordie Bellaire, and Alex Sinclair.”

In March, Arrowsmith will be joined by the return of Astro City, Busiek’s collaboration with Brent Anderson, Alex Ross, and Alex Sinclair, first with an Astro City one-shot special introducing new characters and setting the stage for upcoming dangers for the city and the world, plus new collected editions that will make the entire Astro City backlist available again.

Longtime fans will also be treated to a new urban-fantasy graphic novel, The Gods on Sunday Morning, from the whole Astro City team, after which they begin a new ongoing run on the acclaimed series.

Also in the works is Free Agents, a new series launch from Busiek with co-writer Fabian Nicieza and artist Stephen Mooney and the return of Autumnlands from Busiek with Benjamin Dewey and Jordie Bellaire, all planned for late 2022.

In addition to all the exciting new content from the mind of Busiek, there will also be re-releases of his popular backlist gems like Shockrockets and Superstar: As Seen on TV, both with Stuart Immonen, Wade von Grawbadger and Jeromy Cox, and The Wizard’s Tale with David Wenzel.

In the upcoming Arrowsmith: Behind Enemy Lines, it’s World War I—but a war of wizards and dragons as much as bullets and barbed wire. Young airman Fletcher Arrowsmith plunges back into the heat of war—and finds himself behind enemy lines, facing a threat that could doom the Allied Powers. Old friends and new favorites will appear, and the world of Arrowsmith will be deepened, as previously-secret history and machinations are revealed.

For the re-mastered hardcover, Arrowsmith: So Smart In Their Fine Uniforms, readers are introduced to young Fletcher Arrowsmith who learns the true cost of war in an alternate history where dragons and magic spells are as much a part of World War I as bullets and barbed wire. This edition, deluxe-sized and in hardcover for the first time, will present the art as Pacheco originally intended, and will feature ancillary material about the creation and history of Arrowsmith.

Of the return of Arrowsmith, Busiek said: “Stepping back into this universe at long last, and writing these characters again feels like coming home, and visiting with old friends—admittedly, old friends we do dangerous, stressful things to in the name of adventure. And the art, by Carlos, Rafael, and Jose, is just astounding. Arrowsmith fans have been very patient, but have never been shy about letting us know they want more—and I can’t wait for them to see both the new series and the re-mastered original in the kind of hardcover edition we think it deserves.”

Carlos Pacheco added: “It seems like only yesterday Kurt and I were dreaming of creating a book about WWI and magic. It’s been a long trip since then. We kept hoping to bring the world of Arrowsmith back to life, but the stars didn’t line up properly until now. And maybe the stars didn’t help, but the readers have. I feel like we’ve had an unwritten agreement with all the people who’ve supported Fletcher and Hilda since the day they both took flight, and pushed us to bring them back. We’re very happy to say here they are, after all these years.”

“It’s also wonderful to be back in the world of Astro City,” said Busiek. “Alex, Brent, and I have been planning this for a long time—we’re introducing a teen-hero team, The Jayhawks (and more), in the special, and setting off a mystery as important to Astro City as what happened to the Silver Agent or the story of the Broken Man. Alex has designed a cornucopia of new characters, and Brent is going to town on the artwork. It’ll be a very fun ride—and yes, longtime readers, we will get to the story of the N-Forcer, I promise! Plus, I think The Gods on Sunday Morning will be a treat, both for Astro City readers and others. It’s a standalone urban fantasy graphic novel about a group of long-forgotten gods in the world today, taking a similar approach to fantasy as what Brent, Alex, and I have done with superheroes, and it’s looking just gorgeous.”

Artist Brent Anderson added: “Twenty-seven years ago Kurt Busiek offered me the chance-of-a-lifetime to co-create an entire universe filled with super-powered heroes, crazy villains, wizards, sorcerers, mad geniuses, monsters of all stripes, and extraterrestrial aliens, a universe the center of which is Astro City. Originally published by Image in 1995, these are comic book stories I am proud to see on my bookshelves, and I look forward to creating many more. Like I said, chance-of-a-lifetime! Over the years, Kurt has asked me to draw several non-Astro City stories—The Spirit, Green Lantern, the Avengers, but the most recent is The Gods on Sunday Morning, an excitingly original graphic novel published exclusively through Image Comics by Kurt Busiek. Drawing it made me feel young again.”

On future projects, Busiek said: “I can’t wait to start telling you about what’s coming for Dusty and Learoyd in Autumnlands, what the Free Agents are all about, and beyond. We’ve been cooking up a lot, and it’s great to finally get to see it becoming a reality.”

Ben Dewey said of Autumnlands, “Kurt is one of my favorite creators. He can invent captivating stories that have a grand, high-concept cosmological scale or get a reader deeply invested in the details of a simple fireside conversation between two regular people. He understands characters and why we love or despise them. His work is proof that comics can be magical.”

“Working with him on Autumnlands pushed me to be my best and it’s a world that has many exciting frontiers ready to be explored. When it returns I think it’ll be just as big a challenge for me as it was when we started off because the scale of the world demands it. I treasure every project I’ve gotten to work on with Kurt; as his collaborator there’s always opportunities to learn more about the craft of storytelling in comics. He never fails to inspire me with his boundless  imagination, enthusiasm and wit. I’m a fan and I’m looking forward to seeing what new worlds he’s going to show us. I’m lucky because I get to see them first!”

“Kurt and I have always had fun working together,” said Fabian Nicieza. “I’ve been waiting 30 damn years to have an Image book! Free Agents hits all our strengths and sweet spots, and Stephen and Tamra only add to my excitement.”

“I’m thrilled to be joining such a top-notch team,” added Stephen Mooney. “Kurt and Fabian put together some incredible concepts, and I’m eager to show what Tamra and I can bring to the party. Teaming up with Image again just makes it all the sweeter.”

Arrowsmith: Behind Enemy Lines #1 will be available at comic book shops on Wednesday, January 19:

Arrowsmith: So Smart In Their Fine Uniforms (Diamond Code: NOV210098, ISBN: 978-1-5343-2206-6) will be available on Wednesday, February 23 and in bookstores on Tuesday, March 1. It can be pre-ordered at your local comic book shop or independent bookstore or via Amazon, Barnes & Noble, Books-a-Million, and Indigo.

Busiek’s upcoming releases will all also be available for purchase across many digital platforms, including Amazon Kindle, Apple Books, and Google Play.