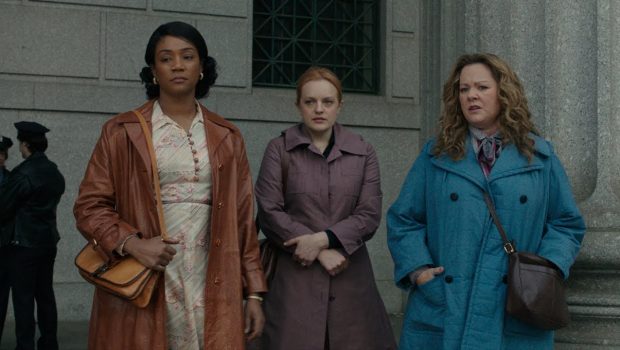 Now screenwriter-turned-director Andrea Berloff is making her feature-length debut with The Kitchen. Her film is based on the DC comic by Ollie Masters and Ming Doyle. Berloff has previously contributed to several acclaimed films, including World Trade Center (2006), Blood Father (2016), and Straight Outta Compton (2015) for which she received an Oscar nomination. With her talented pedigree and a fantastic ensemble cast led by Melissa McCarthy, Tiffany Haddish, and Elisabeth Moss, will The Kitchen be as good as it looks on paper?

Set in 1978’s Hell’s Kitchen, New York, the Irish mafia runs the territory spanning between Eight Avenue and the Hudson River. The story centres around mob wives Kathy, Ruby, and Claire, played by McCarthy, Haddish, and Moss, respectively. The three women are expected to play their parts of servitude for their husbands, who are either abusive, narcissistic, or worse.

The women’s lives take a dramatic turn when their husbands are arrested by the FBI (headed by rapper Common) during a failed robbery. With very little financial support and terrible living situations, the wives take over their husbands’ dealings. The transition creates major disruptions within the workings of the Mafia and has potentially disastrous results.

A film with this much talent and a refreshing viewpoint on crime seems bound for greatness. Unfortunately, it is a case of fantastic ingredients and a terrible recipe. The positives include the lensing and framing by acclaimed cinematographer Maryse Alberti and Sarah Edwards’ costume design. Both formal aspects strongly capture the late 1970s period, which results in striking compositions and appealingly stylish flourishes.

The three leads do a decent job playing the characters in Berloff’s screenplay. As Kathy, McCarthy brings the same understated dramatic approach as her Oscar-nominated turn in Can You Ever Forgive Me? (2018) but not to the same effect. Tiffany Haddish reveals some of the dramatic potential she showed in Night School (2018) as the impulsive Ruby. Meanwhile, Moss treats her role like a walk in the park with the vulnerable and eventually liberated Claire. The supporting cast, consisting of Bill Camp, Margo Martindale, Common, and Annabella Sciorra, do what they can with their one-dimensional roles. However, Domnhall Gleeson as a Vietnam veteran turned hitman is laughably unconvincing. 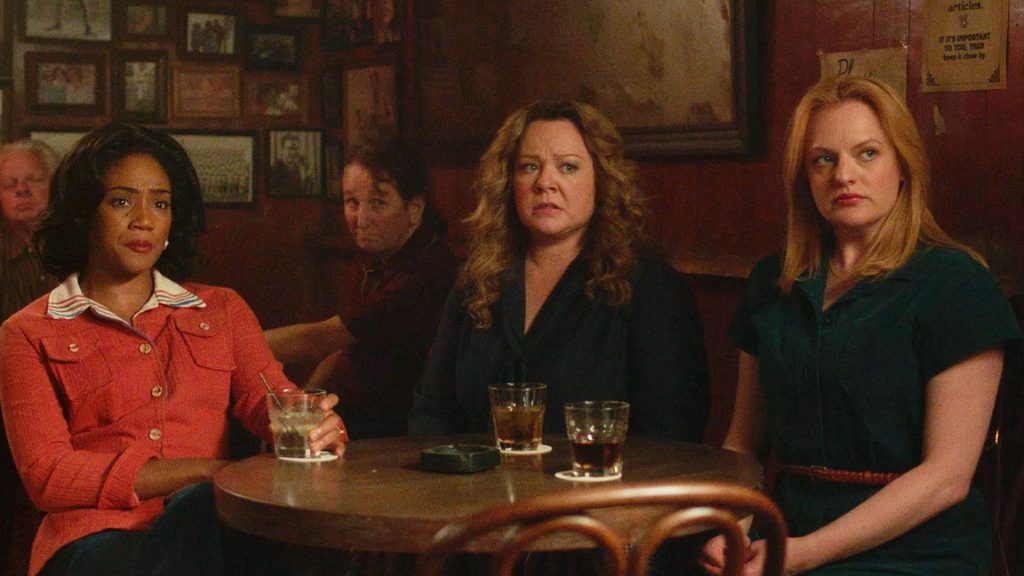 While the production values and the actors’ efforts are solid, The Kitchen’s shortcomings include its direction, script, and editing. The film’s subtext aims for female empowerment, and while the idea is perfect for this story, the execution is poor. Every soundtrack choice (like Paint It, Black by The Rolling Stones) is either on-the-nose or unintentionally funny, which kills the film’s seriousness. For example, the film opens with Etta James’ cover of It’s a Man’s Man’s Man’s World, which signals the desperation and lack of subtlety.

The Kitchen becomes unintentionally funny once Berloff ups the dramatic ante to farcical levels in the third act. The dramatic stakes and motivations are laughably convoluted. The women argue they want to improve the neighbourhood by dismembering people in Hell’s Kitchen. What? Apart from the overstated violence (a scene involving Ruby’s character was laugh-out-loud funny) and the ineffective twists, the worst moment involves Sciorra’s Maria Coretti (who is utterly wasted here) meeting the three leads. She is in awe of the women says that they are ‘all Gloria Steinem and shit. You give those guys hell’. The film is packed with similarly deterring moments designed to be inspiring and meaningful about the female condition that are pandering and self-indulgent.

The haphazard storytelling becomes a joke too. The women perform a debt collection service once and a montage ensues in an unsatisfying fashion. The lack of escalation, thrills, and immersion kills the story’s momentum and makes it underwhelming and dull. The same adjectives are applicable to the characters. They have no depth, nuance, or distinctive traits, and the actors suffer for it. Claire’s arc becomes problematic as it is shown as empowering but feels disingenuous as it involves psychotic behaviour and grisly violence. Though Moss and Gleeson do their best to make the arc watchable. 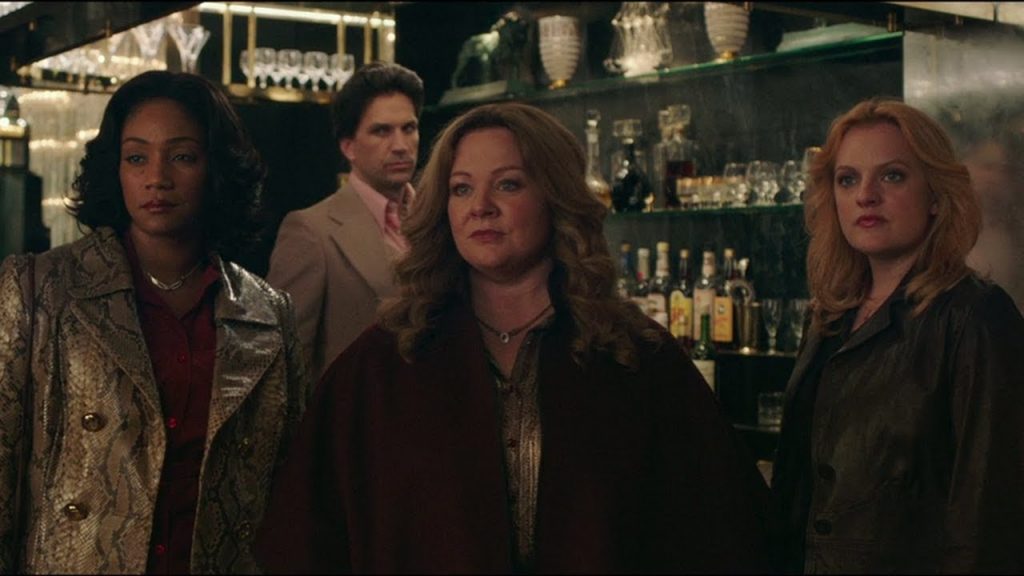 Another example is Ruby’s backstory and the failure to address her identity in correlation to the story’s time period. The racism is surface-level and Ruby’s murky motivations means that Haddish has no agency. Additionally, a late third act twist is rendered pointless and further complicates the story and her character.

Berloff’s input is to blame, not the actors. Despite many montages, her lifeless, stilted direction makes the actors resemble cardboard cutouts. The lack of energy seeps into the staging, which consists of characters walking and talking on sidewalks without action. Even the supposedly climactic ending feels deflated. One character is apparently filled with rage and sorrow but walks away relieved in seconds after discovering a revelation everybody already knew.

Lastly, the sloppy editing ruins the momentum of the storytelling, character development, and thrills. The story’s time-frame is almost unnoticeable until a character underlines it. The lack of transitions means the film is an assemblage of loose scenes rather than a coherent story. Surprisingly, Christopher Tellefsen is the same editor who cut Moneyball (2011), The Drop (2014), A Quiet Place (2018), and Widows (2018). The sloppy editing here hints at possible studio tampering. 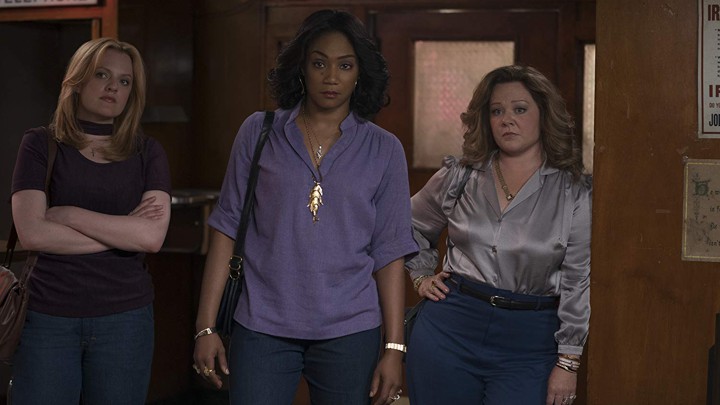 Audiences will care less about behind-the-scenes rumours compared to what is presented on-screen. In its final form, The Kitchen is a flawed project with thin characters, sloppy direction, jumbled storytelling, a confused message, and horrific editing. Considering the talent involved, it is a major disappointment.

Summary: The Kitchen is a flawed project with thin characters, sloppy direction, jumbled storytelling, a confused message, and horrific editing. Considering the talent involved, it is a major disappointment.