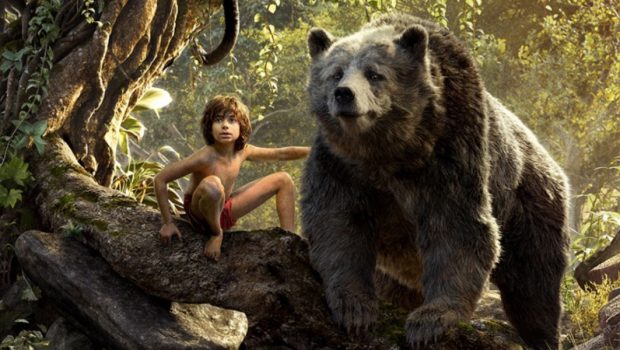 Originality is a dying concept in Hollywood with cinema complexes flooded by remakes and sequels. In a world where this is now an accepted notion, it is important to still see a point of difference in order to appreciate a film in it’s second production run. Jon Favreau’s The Jungle Book has done this and more. What Favreau has done with the beloved classic is something which would have been deemed impossible years ago and even until recently the thought of a live action The Jungle Book could not have been taken seriously enough to imagine it being successfully carried out to the point of critical success. Yet Favreau’s vision has been executed gloriously with spectacular computer generated VFX landscapes and characters that connect on an emotional level as well being aesthetically pleasing.

Based on Rudyard Kipling’s classic novel and drawing inspiration from the 1967 Disney film, The Jungle Book tells the tale of the man cub Mowgli (played by Neel Sethi in his first starring role) who was found in the Indian jungle and raised by a pack of wolves as their own. When he is on the verge of becoming a man, he attracts the eye of the savage and feared tiger Shere Khan (voiced by Idris Elba) who vows to take out his anger towards men on Mowgli. Fearing the worst, Mowgli’s loyal protector, the panther Bagheera (Ben Kingsley) accompanies him on his journey back to the man village. Even though the strain is lessened by the new friendship with Baloo the bear (Bill Murray), the journey is not a safe one as Shere Khan is never far behind and other threats are waiting to take advantage of the seemingly helpless boy.

The Jungle Book is an astounding piece of cinema which showcases what CGI is capable of in 2016. There is only one piece of the film which is not computer generated and that is the character of Mowgli, but one could be forgiven for believing that the whole film was shot on location in the Indian jungle with the animals in their natural habitat. The result is absolutely stunning with visuals that are breathtakingly beautiful and at times agonisingly graphic as a result of their realism. It is important to keep in mind that the 1967 animated version of the film was overwhelmingly family friendly, but in real life the wilderness is unforgiving towards humans and animals are ruthless and unpredictable creatures. This is what Favreau has captured in his film and some scenes are rather tense and confronting due to the film’s realistic view on nature and this may be unsuitable for younger family members.

Disney always does a fine job of playing homage to it’s history and past projects. This 2016 version of the Kipling classic does contain elements borrowed from it’s animated predecessor, but it’s differences are refreshing and proof that in recycled ideas there can still be originality. What fans of the first Disney film will be appreciative of is the fact that there is still “The Bare Necessities” and “I Wan’na Be Like You” with just a tad of “Trust In Me” by Kaa. This new film is by no means as musical as the original, but manages to insert these iconic songs as a means of storytelling. Along with the obvious visual differences between the two films, there are also differences in the actual story and the ending to give an element of originality to a much told tale. 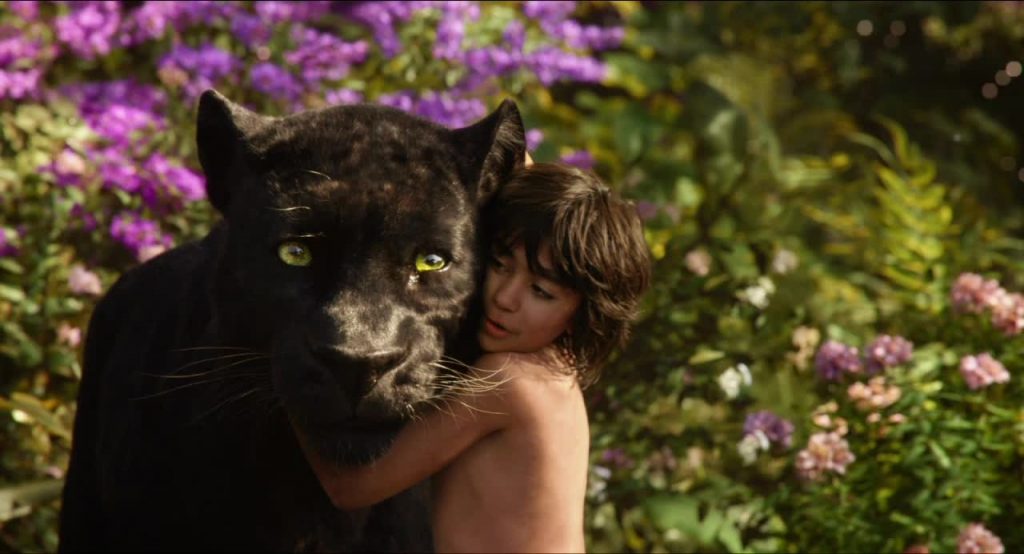 When we first meet Neel Sethi’s Mowgli, one can see why he was cast in the much coveted lead and only human role in the film. Sethi has the cheeky and adventurous spirit which Mowgli is known for and his playful smile makes him instantly likeable. The Jungle Book is Sethi’s first major role and although this is obvious at times, he does remarkably well considering he is taking on the always difficult task of being the sole player on the film set with no fellow actors to work off.

However, it is the animal characters who are the most intriguing and endearing which is an incredible triumph for Favreau as they are all purely a creation of CGI. It has always been a challenge of animated and now CGI characters to emotionally connect with a cinema audience and in this case, it is the animals that are actually more likable than Mowgli and definitely more captivating. It would seem that in this film there is an underlying theme that wasn’t in the 1967 version, which is that of the environment and the threat to the natural habitat of these glorious animals. Man is seen as a greater enemy with the large part that fire or the “Red Flower” plays in the film. The Jungle Book is very much a reversal of roles from the real world. Animals are not acknowledged as, but appear to be the superior species while humans are the outcasts and while watching The Jungle Book, we are unknowingly seeing ourselves through the animals’ eyes. 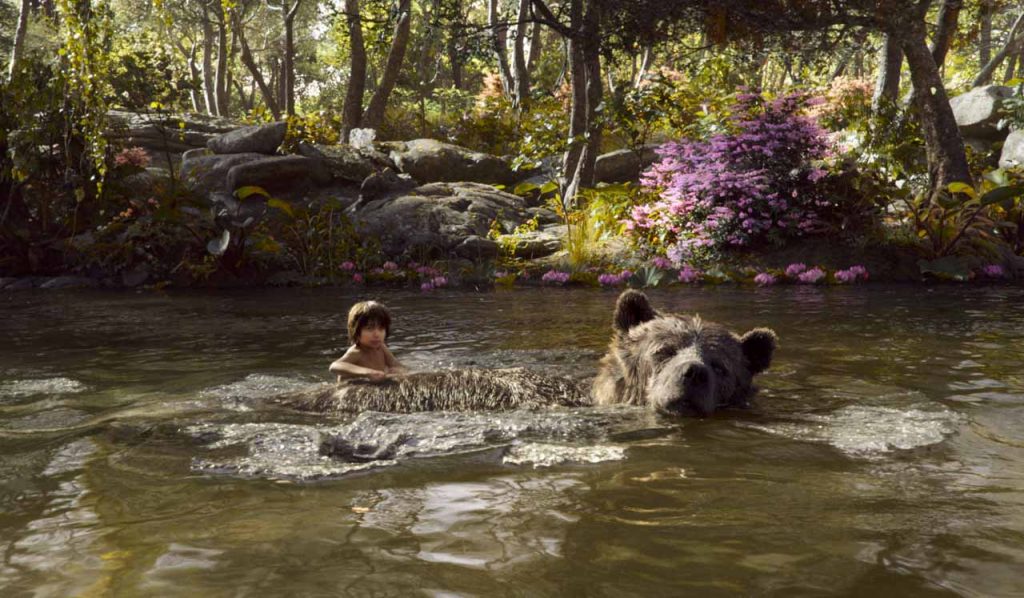 Again, it is a true triumph to feel so much and greatly relate to these characters purely created by CGI. Bagheera (as voiced by Ben Kingsley) and Baloo (Bill Murray) together are the two best friends anybody could ever ask for and compliment each other so well. Bagheera is a fiercely protective, commanding and strong character, but at the same time incredibly endearing and a beautiful creature. Baloo on the other hand is not as goofy as his Phil Harris voiced counterpart, but Bill Murray brings a more human feel to him and allows his humour to flow more naturally. The wolves can also be described as beautiful not just physically, but by nature and their pack is depicted as the perfect place for not just wolves to grow up, but any species and in particular, humans.

On the other side of the animals, the not-so-friendly characters may not create empathy with the viewer, but they do create tension and terror. Idris Elba’s Shere Khan is terrifying and menacing. Nothing is scarier than a villain who’s arsenal is part of his natural instinct. Yet in all the horror he evokes, he is still an incredibly beautiful and exotic creature to behold. It was a wonderful decision by Favreau to make Kaa the python a female rather than male, as Scarlett Johansson adds to the entrancing and alluring nature of the beast. She is another creature that is terrifyingly beautiful and one that those who afraid of snakes will maybe not enjoy seeing in 3D. King Louie (who has also been reimagined here as a gigantopithecus rather than an orangutan) is a three-way cross between his voice actor Christopher Walken, King Kong and Marlon Brando as he appeared as Colonel Walter E. Kurtz in Apocalypse Now. The result is incredibly intriguing, but also menacing and dangerous. 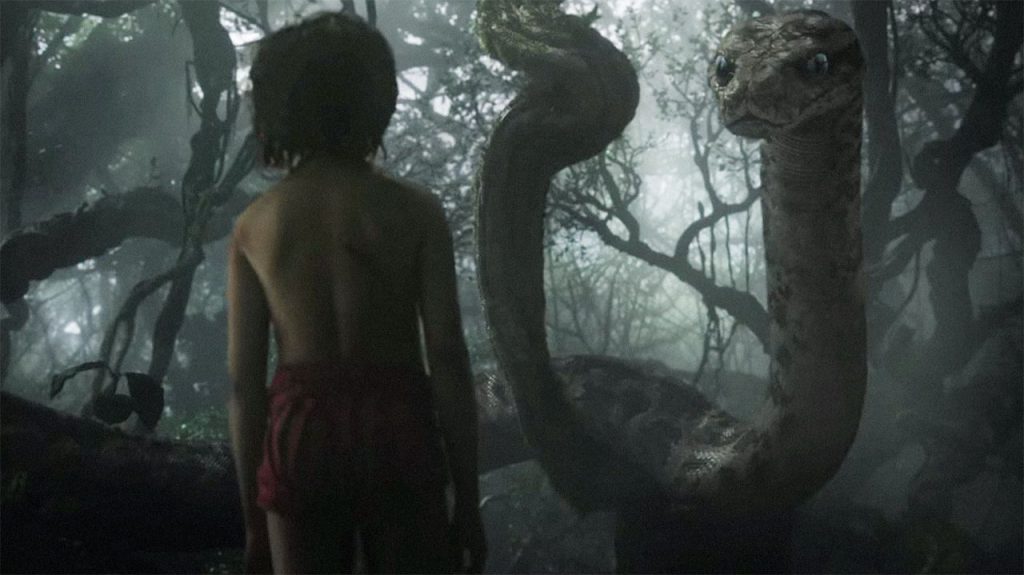 Jon Favreau’s The Jungle Book is incredibly ambitious and therefore is a complete success with the way it has incorporated it’s stunning use of CGI and managed to provoke depth and emotion in it’s characters at the same time. It is a classic tale, which has been respectfully enhanced with an entertaining and enjoyable film.

Summary: Jon Favreau's vision has been executed gloriously with spectacular computer generated VFX landscapes and characters that connect on an emotional level as well being aesthetically pleasing.