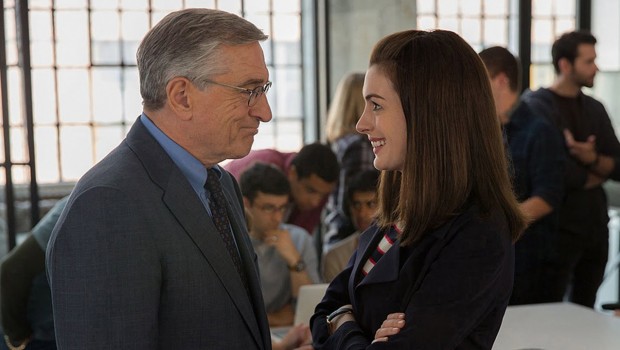 Nancy Meyers’ The Intern attempts to create a snapshot of the changing face of the workplace in the 2010s in endearing and comical fashion, which is perhaps a little too light handed. The film seeks to destroy the harsh and outdated belief that career driven women equal hard-hearted individuals who are icy mothers, as well as demonstrate that older members of the workforce can view retirement as a choice. With these good intentions as the backbone of the film, it is a shame to see a screenplay built around it that is rather ill-balanced and weak, despite it’s witty, amusing dialogue. The Intern is indeed an incredibly light watch even though it deals with complex emotions and situations, which is refreshing but at the same time frustrating to see particular issues taken so lightly.

The Intern has dual protagonists, but unlike most screenplays with such, it does not attempt to focus on the two characters simultaneously. Retiree Ben Whittaker (Robert De Niro) finds that his new lifestyle, not being in the workforce, isn’t as enjoyable as he thought it would be. He answers an ad for and earns a position as a Senior Intern at About The Fit, a highly successful online clothes business run by Jules Ostin (Anne Hathaway). Ben is assigned to Jules to be her personal intern, a decision that does not sit well with Jules as she is very much accustomed to and satisfied with running the business and working by herself. Little by little, she opens up to Ben as she discovers what she needs more than anything else is a friend to whom she can share her innermost thoughts and her concerns about work and life.

As previously stated, The Intern is a look at the changing work place and specifically how people are working for longer and women can be loving wives and mothers at the same time as hard-working career women. It is through the two main characters that these two ideas are expressed and they take place one after the other rather than at the same time in the screenplay, which can feel as though the film has changed direction halfway through. The Intern is almost primarily a character study of Ben in the first half of the film as it explores his personality and lifestyle as both a retiree and widower. He represents the notion that many older members of the workforce do not stay in a job purely for financial reasons, but because they find that the retired life is not what they expected it to be and this is especially prevalent in those who have lost a loved one or are single. Many people do not feel fulfilled by the retired life and even feel a loss of purpose when they are without a job, such is the case of the Ben. He accepts that he is not at the top of the food chain anymore in the world, but is comfortable working for people younger than him rather than being out of the workforce and bored in life.

There is then the more evident example of Jules as the hard working young woman who has both a young daughter and husband at home, who has given up his career so that Jules can flourish in hers. What Nancy Meyers is doing here is seeking to shatter the common perception that working mothers lose focus of their families and are unapproachable to friends and family. Jules is quite a likable character who’s sole focus is really her family and everything she does in her business is for her family. Yet Meyers makes sure that while she is trying to change this perception of working mothers, she also makes it clear that in society it is still not 100% accepted nor is it an easy perception to be rid of for both outsiders and those affected directly. 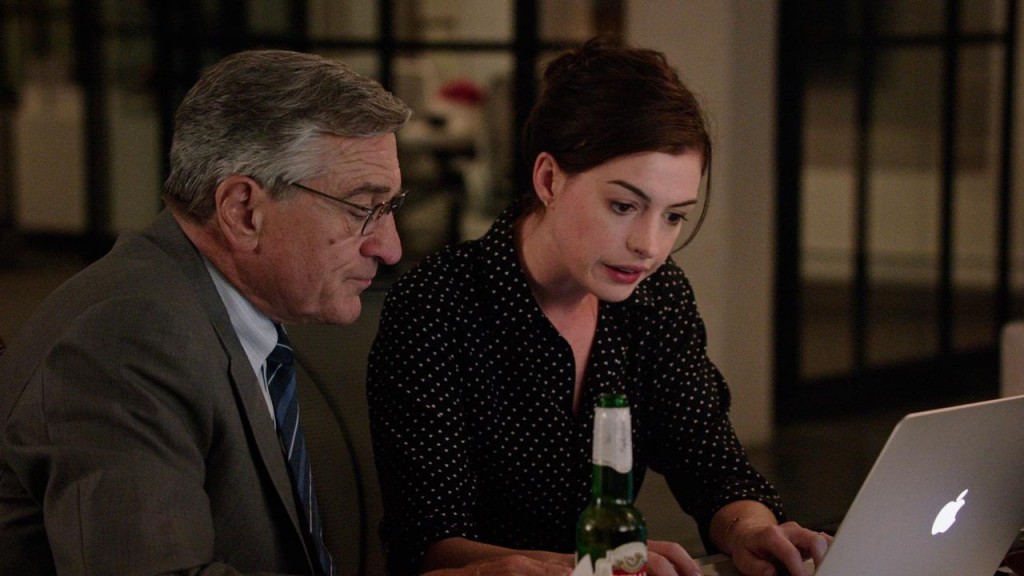 With the film starting off being more about Ben and then ending being more about Jules, the screenplay feels rather uneven. The script also suffers by having a lack of strength in the conflict, particularly towards the end. The film spends so much time looking at the characters and what they represent that the conflict and resolution lose impact and are addressed far too close to the end to get a clear and comfortable idea of what is going to happen to these characters. However, it is admirable that The Intern does manage to represent something that is so embedded in our current workplace culture and make it enjoyable and entertaining. The screenplay may not be perfect, but the film is rather a fun and particularly easy to watch. There are some very funny scenes and the dialogue is very well written, intriguing and witty.

The casting of Robert De Niro as Ben and Anne Hathaway as Jules is another reason as to why The Intern makes for an enjoyable viewing experience. De Niro’s Ben Whittaker is incredibly likable and empathetic. He is the man everyone would want as their friend and everyone feels for him after what he has been through. Hathaway’s Jules is also extremely relatable and even more so as the film progresses. One comes to know her much better as the film goes on, and as it does her performance becomes more emotional and convincing. De Niro and Hathaway work very well on screen together and their chemistry is believable and enviable. The Intern has every good intention, but is let down by it’s somewhat messy screenplay. Yet it is completely watchable and still enjoyable thanks to it’s moments of hilarity and crisp, likable performances.

Summary: The Intern attempts to create a snapshot of the changing face of the workplace in the 2010s in endearing and comical fashion, which is perhaps a little too light handed.