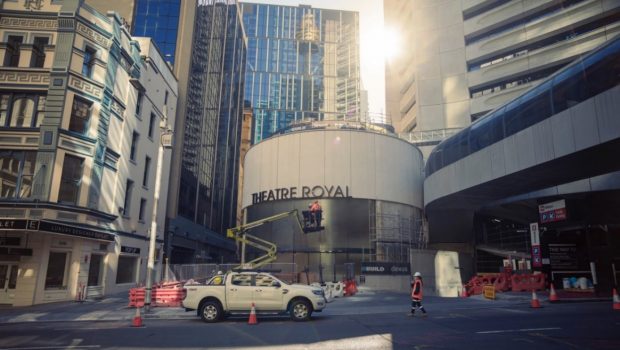 Trafalgar Entertainment Group, leading global live entertainment company and operators of Sydney’s Theatre Royal, are thrilled to confirm that it will be welcoming patrons into the building from December 2nd, 2021, with two of the most exciting current new Broadway musicals.

Sir Howard Panter, Joint CEO of Trafalgar Entertainment Group said: “We are thrilled to confirm this major milestone in the reopening of this magnificent venue – to secure two new major new Broadway musicals to launch the venue.  We set out from the start to bring the very best of international theatre to the people of Sydney, and this is the beginning of our long-term commitment to first class programming of this exciting new venue.”

Ignited by the album that defined a generation, featuring beloved hits such as ‘You Oughta Know’, ‘Head Over Feet’, ‘Hand In My Pocket’, and ‘Ironic’, Jagged Little Pill is Australia’s next smash hit musical.

Leading the Australian cast of Jagged Little Pill is one of Australia’s most awarded and beloved entertainers Natalie Bassingthwaighte playing the role of Mary-Jane Healy.

Nominated for 15 Tony Awards® (the most of any show), and a recent Grammy® winner for Best Musical Theatre Album, this electrifying production about a perfectly imperfect family living in 21st century suburbia, Rolling Stone Magazine declared it ‘Burns with passion. The tears welled up in my eyes, then spilled onto my cheeks… I want to see it again and again.’

Critically acclaimed musical Girl from the North Country, written and directed by Conor McPherson and with music and lyrics by Bob Dylan, is the first new international production to be announced for Australia since the NSW Government announced the return of live theatre to the state. The New York Times touted this show as ‘A ravishing production! Bob Dylan’s songs have never sounded so heartbreakingly personal and universal. As close as mortals come to heaven on earth.’

Since opening at The Old Vic in London, Girl From The North Country has taken the theatrical world by storm, selling out seasons in the West End, Toronto and Broadway, and is now one of the most critically acclaimed multi award-winning productions of the 21st Century.

Theatre Royal Sydney is pleased to launch images of the brand-new Theatre Royal Sydney sign which has now been placed on the external façade and was crafted and produced by Owen Signs in Newcastle NSW.The Theatre Royal Sydney, located within Sydney’s business and high-end fashion precinct with the new glass entrance signifying the window into its cultural world, truly where the city meets the stage.

Located within the 25 Martin Place at the heart of Sydney’s Central Business District, Theatre Royal Sydney is an important cultural asset for Sydney and NSW.  Trafalgar Entertainment Group is delighted to be working in partnership with the NSW Government and Dexus, owner of the landmark 25 Martin Place to enhance Sydney’s cultural landscape.  City centres are evolving; the best will have a lively, rich mix of uses, day and night.  This pioneering partnership will help to reinvigorate Sydney’s night-time economy, providing new jobs and making it amongst the best places to live, work and visit in the world.

In other exciting news Theatre Royal Sydney is proud to announce a 3-year partnership with RBC Capital Markets, part of Royal Bank of Canada (RBC), its first arts and cultural partnership secured in Australia.    This is a major milestone for the venue to have on board a prestigious Premier Partner. RBC is a major supporter of the arts globally and has been Principal Partner of London’s Old Vic theatre since 2015, enabling more artistic output and varied programming than ever before including 30+ main stage productions, 20 of which were world premieres and 17 have transferred to the West End, Broadway and beyond. In addition to supporting main stage productions, RBC helps The Old Vic deliver their vital social mission work including Take the Lead, a free youth employability programme, The Old Vic Emerging Talent Programme and Curtain Up, a gteway to the arts for people of all backgrounds.

One of those world premieres at The Old Vic was Girl From The North Country now making its way to Australia at Theatre Royal Sydney.

This is the first arts partnership for RBC of its kind across Asia Pacific and supports RBC’s global commitment to support the Arts and Cultural communities in all countries they operate in because they believe that the Arts plays an important role in building vibrant communities and strong economies. This partnership will significantly impact the Australian community through a broad range of projects including opportunity for productions from the theatre to be broadcast to the NSW regions. It will also provide marketing and fundraising opportunities to expand RBC Capital Markets support of community organisations including Youth off the Streets, Ronald McDonald House Charities Sydney and RBC Race for the Kids.

The Trafalgar Entertainment Group/Theatre Royal Sydney Partnership will also support RBC’s Women in Finance Scholarship with University of Technology Sydney (UTS) Business School. The purpose of the scholarship is to advance the progression of women in finance through rewarding talented female students. This will be a unique opportunity for UTS graduates to be mentored by Dame Rosemary Squire, Joint CEO of Trafalgar Entertainment Group who is the only woman to have won the EY UK Entrepreneur of the Year Award and became the first woman to represent the UK at the World Entrepreneur of the Year. The scholarship is offered to outstanding female students commencing their second year of study in the UTS Bachelor of Business with a Finance major, and includes $5, 000 of academic support per year for two years, as well as a temporary paid work internship at RBC Capital Markets.

Blair Wark, Chief Country Officer, RBC Capital Markets Australia said, “RBC has a long-standing commitment to support the arts, recognising the role it plays in enhancing the communities in which we live and work. Our support of Theatre Royal Sydney builds on that commitment and is a great opportunity for us to work with the team at such an exciting time for the theatre and the Australian arts sector. It is a beautiful connection that one of the very first productions supported by RBC is a musical that we supported on debut in London, and we look forward to it being the first of many.”

NSW Minister for the Arts Don Harwin said, “The return of the Theatre Royal Sydney and the terrific line-up of shows is a major step forward in the Sydney CBD renaissance, and a shining example of what can be achieved with Government working in partnership with business.”