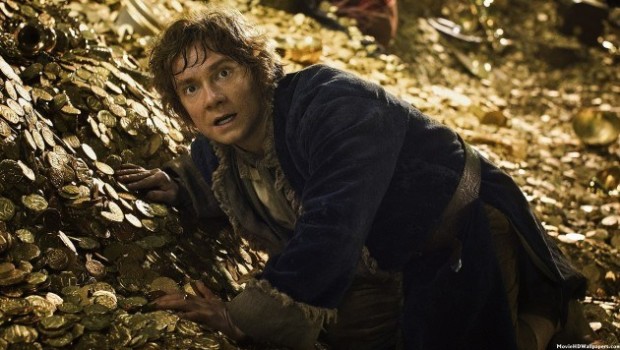 The Hobbit: The Desolation of Smaug (3D) – Film Review

Written by Fran Walsh, Philippa Boyens, Peter Jackson and Guillermo del Toro (screenplay), based on the novel “The Hobbit” by J.R.R. Tolkien

We’re two down and one film to go in Peter Jackson’s Hobbit trilogy. The Desolation of Smaug wasn’t screened to media outlets in the much criticised High Frame Rate format that tainted An Unexpected Journey. This mode will be available to the public but seeing the film in the standard 3D aesthetic is a treat. The 3D visuals are clear and unintrusive and there is occasionally a selective 3D long shot that provides depth to some of the narrow spaces of Middle-earth, such as the entrance of a spooky forest. Some of the early monsters that Bilbo Baggins (reprised by Martin Freeman) confronts are also scarier and feel more dangerous due to the tight close-ups, like a giant spider that gnashes its fangs in the forefront of the frame. In the final quarter, the dragon Smaug emerges as an astonishing visual achievement, with believable heft and weight provided by Benedict Cumberbatch’s booming baritone voice and piercing eyes, as much as the superbly detailed computer animations.

Yet a scene where Bilbo sees a glorious sunset, before he is pulled back into the entangled branches of the forest, epitomises the way the beauties of this world are lost inside a numbingly bloated combat movie. For as much as Smaug is a technical improvement over its predecessor, the screenplay is still disappointingly shallow and the pacing is glacial. Unlike The Lord of the Rings trilogy, where a poignant friendship forged the heart of the story, Peter Jackson’s Hobbit films have no thematic goals or subtext that can transcend good and evil. His chief concerns are the countless ways that he can decapitate Orc monsters and finding new reasons to enslave and then free Bilbo, Thorin Oakenshield (Richard Armitage) and the other dwarfs. Each of the narrative’s episodes are written around elaborate, overstretched action set pieces, such as barrel riding down a river, where plausible physics are gleefully disregarded, ultimately minimising the damage and dramatic tension faced by Bilbo and his fellowship. 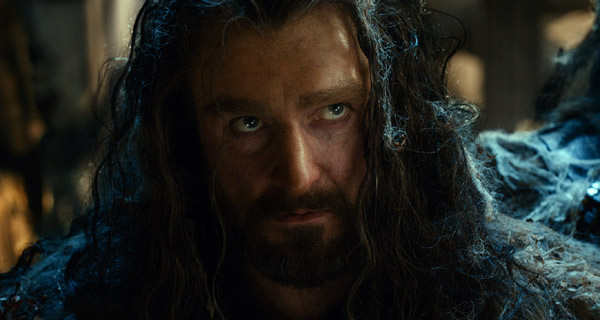 Although less linear than the previous film and opening multiple subplots, the script is extremely light on characterisation. The opening scenes look promising because the once reserved Bilbo is now becoming possessed by the powers of the One Ring. It makes him hungrier and greedier but the internal conflict goes unexplored. Bilbo and Gandalf (Ian McKellen) are the series’ two best characters but they’re also marginalised by side stars that are difficult to care about. Jackson and his three co-writers (including Guillermo del Toro) needlessly continue to import characters from The Lord of the Rings, even though they aren’t in Tolkien’s original story, and invent new ones too. Elven archer Legolas (Orlando Bloom) makes an unwelcome return in an unnecessary, boring love triangle involving himself, a newly written ninja-like archer named Tauriel (Evangeline Lilly) and Kili (Aidan Turner), a wounded dwarf. This thread makes the narrative painfully slow and flabby, while the film’s quietest moments are burdened by such gloomy clunkers as “with every victory this evil will grow” and “the enemy is preparing for war”. 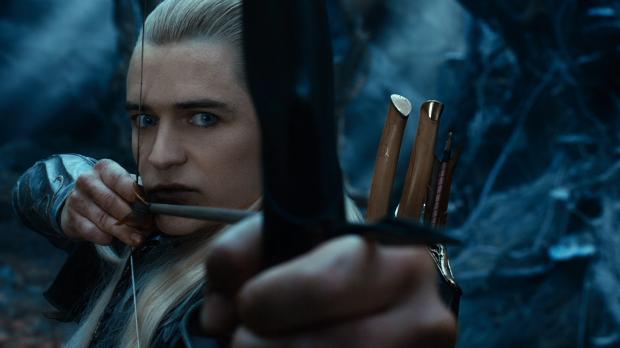 The scene I liked best in the film is Bilbo’s confrontation with Smaug inside the Lonely Mountain. This is a powerful sequence and beautifully framed. It opens with a wide shot of the dragon’s lair littered with gold and then the camera tightens onto the sleeping dragon’s twitching eye. The scene works because rather than throwing us into mindless combat, it forces us to imagine the very worst for Bilbo so that’s it’s suspenseful and psychologically inevitable. Yet typical of the film, it becomes too much of a good thing. It is also interrupted by Peter Jackson’s insistence on expanding the universe by rudely cutting back to the side stories. Despite an admittedly sharp cliff-hanger ending, it is the tardiness of the story and the deliberate, unresolved turgidness of this series in general which lingers more than any desire for another three hour film about the dwarves reclaiming their real-estate. Hopefully There and Back Again is a tighter film, with stronger character development and fewer magic doors.

Summary: For as much as Smaug is a technical improvement over its predecessor, the screenplay is still disappointingly shallow