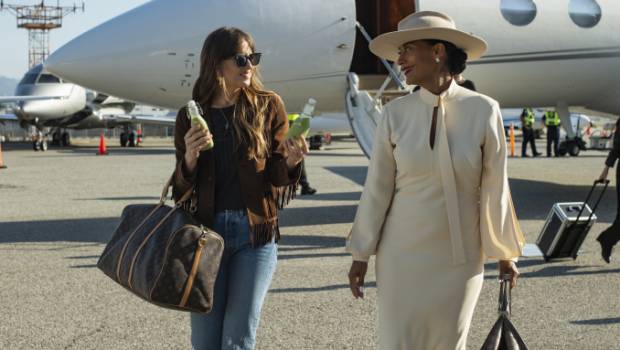 Set in the dazzling world of the LA music scene comes the story of Grace Davis (Tracee Ellis Ross), a superstar whose talent, and ego, have reached unbelievable heights. Maggie (Dakota Johnson) is Grace’s overworked personal assistant who’s stuck running errands, but still aspires to her childhood dream of becoming a music producer. When Grace’s manager (Ice Cube) presents her with a choice that could alter the course of her career, Maggie and Grace come up with a plan that could change their lives forever.

In this 1 minute video Dakota Johnson talks through her character “Maggie”, a personal assistant to a musical icon.

Looking for the perfect film to see with your girls? #TheHighNote starring @dakotajohnson is the one for your crew. Swipe right ➡ to discover how her character Maggie, found her voice while working for big time superstar Grace Davis (@traceeellisross). Catch it in cinemas from Thursday.

The debut song and music video from Emmy Nominated and Golden Globe® Award-winning actress Tracee Ellis Ross and the first single from The High Note.

In this 1 minute video Ice Cube talks about playing “Jack”, a long time manger to a diva superstar who wants to keep the gravy train going.

He's the best manager in the biz. Don't miss Ice Cube in The High Note, in cinemas SEPTEMBER 24.