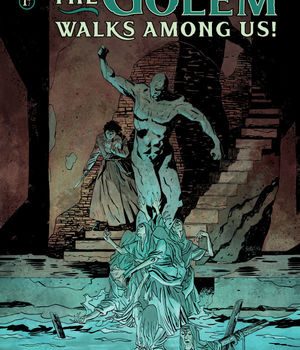 The Golem Walks Among Us #1 Review

The Golem Walks Among Us #1 Review Kevin Mwenda
Score

Summary: Great artwork, presentation, and writing. The action is paced well throughout to keep the reader engaged till the end.

In The Golem Walks Among Us #1 writers, Mike Mignola and Christopher Golden come together to create this tale from the Outerverse. The comic features a golem that has been awakened from long sleep to help fight against witches, and those who worship them and use their powers to cause suffering in the world.

The Golem Walks Among Us #1 sets the story in the late 1930s and begins on a village in the Northwest side of Italy. It starts with the birth of a child, and the actions of various characters trying to save the newborn from practitioners of witchcraft. We soon learn that in that town, there are those who worship former witches and sacrifice children from the village to gain magical power. Fighting breakout between the men after the child and those trying to save it. It is at this moment when JOSEF, the protagonist and THE GOLEM, enters the scene (falls from a plane and does a superhero landing), and fights off the men after the child. As the comic progresses, we also learn that it was a ploy to get Josef to the village by one of the oldest original witches and Josef’s foe Kushim. The comic ends with an ultimatum from the witch that leaves the golem taking a beating from a monster created by the witch.

I really loved the presentation of the comic. The creators’ choice to use dark colors complements the comic’s horror-ish vibe with contrasts when illustrating magical powers (bright orange and red). The mix of these two fit perfectly into the 1930s monster narrative which the comic is set in. Can’t wait to see what becomes of Josef in consequent comics.