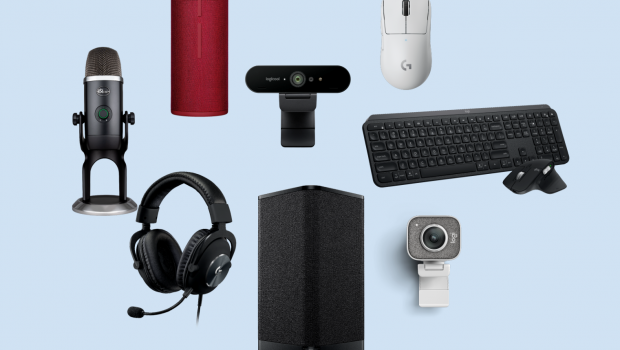 The Golden Child’s Gifts for Dad

Give dad the tools to work smarter, not harder. The Logitech MX Master 3 and MX Keys is the desk companion he wishes he had earlier. This duo has precision speed and shortcut options to make his tasks seamless, all whilst looking sleek in the work space.

Dad can look both professional and handsome through the quality Ultra 4K HD lens of Logitech Brio. Combining professional grade technologies to auto-adjust lighting in all environments, a frame rate of 90 fps and pristine audio with noise cancelling, dad’s on his way to his next promotion.

Does dad love the sound of his own voice? He’ll like it and be able to project even more with a state-of-the-art, professional grade Blue Yeti X microphone. Compact with premium Blue sound quality and an illuminated multi-function smart knob for audio adjusting, this mic is the key to his next audio adventure.

Take a louder and bassier trip down memory lane to dad’s golden oldies with help from Ultimate Ears HYPERBOOM. The loudest of the Ultimate Ears family, this speaker is the catalyst to creating good times to the sound of the family’s favourite music.

If dad doesn’t mind a sneaky gaming session, watch him geek out on Logitech’s lightest, fastest and most advanced gaming mouse ever. Built with the Hero 25K Sensor for advanced precision and a choice of three colourways, he’ll be unlocking new levels at record speed.

Spending Father’s Day at a distance? The Logitech StreamCam will make it feel as if he’s in the same room through high quality visuals, dual mics for uninterrupted conversations and mounting options, as well as special effects to play with so catch ups are always a vibe.

Gain some brownie points by wrapping up an Ultimate Ears BOOM 3. Equipped with clear, balanced, 360° sound and one-touch music control, BOOM 3 means dad can play, pause and skip tracks directly on the speaker until he finds his favourite tune.

Take dad’s battle station to the next level. The G PRO X Headset offers LIGHTSPEED technology to game wirelessly without compromising the latency, connectivity or battery. Fitted with a BLUE VO!CE mic with filters and studio quality audio, dad’s new gear will make his buddies green with envy.