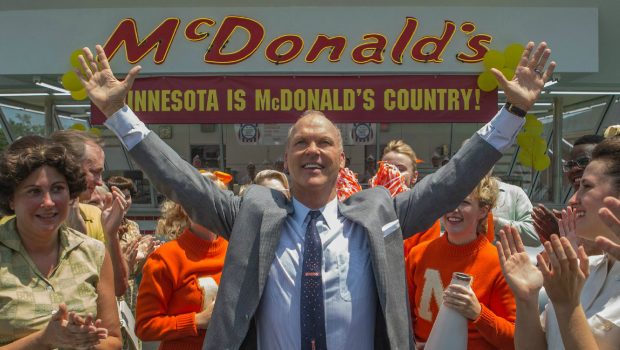 The Founder is an interesting story that focuses on the wrong person. The film stars Michael Keaton as Ray Kroc, who in the 1950s franchised McDonald’s by essentially stealing the idea out of the hands of its creators, two small-time brothers running their own takeaway place. They would have been far more sympathetic leads for this story than the degenerate who spearheads the film. It’s true that an excellent Michael Keaton performance is The Founder’s commercial and artistic hook. However, the film is uncertain about the narrative type it is selling and uses coincidences and contrivances to string Ray’s journey together. Some of the confusion is the result of hiring John Lee Hancock as the director. The last two films he’s made, The Blind Side and Saving Mr. Banks, have been forgettable sugar-coated fairytales about bad situations improving through hard work and co-operation.

Initially, The Founder looks to depart from that schmaltz. Ray is not a nice man. This washed-up, alcoholic milkshake machine salesman is the type of oily creep who would spit into the palm of his hand before extending his reach to you. But who suggested he was the right angle for a whole movie? Its also hard to attack the Golden Arches themselves when Hollywood studios thrive off marketing deals with the fast food giant. Faust with fries. Given this predicament and Hancock’s style, The Founder is somewhere between an infomercial and an entrepreneurial rise. It lacks the tragedy and irony that cut deep in The Social Network—a film that rings loudly here because year by year it has attracted inferior cover artists and impersonators.

The early scenes of The Founder underline its identity problems. The sequence where Ray stumbles upon the original McDonald’s store, run by the brothers Dick and Mac McDonald (played by Parks and Recreation’s Nick Offerman and John Carroll Lynch, with seriousness and naivety, respectively), is too generous to McDonald’s image. In true sugary Hancock tradition, the director highlights the speed of the service, the angelic staff and the family appeal. The film sees supply and demand as the linchpin of Ray’s success, but overall there aren’t enough shades of grey. And how could a travelling salesman never have tried takeaway on the road before? There are also no political comments in the dialogue about the speed of the service diminishing the food quality, unhealthy cooking or how hard the workers are pressed. While set in the 1950s, these same issues would have still been apparent and what we know now about McDonald’s absolute soullessness now is too valuable and well documented to ignore. There is also a long sequence where the brothers explain to Ray about how they developed the setup for McDonald’s using a chalk outline. This is boring storytelling that doubles as an ad for McDonald’s formula for success. While sitting with the brothers over dinner, the camera doesn’t even cut to Ray’s face for a reaction once they’ve finished telling the story, which undermines its importance to the narrative.

If The Founder’s script were sharper too it could have been funnier and more satirical about fast food giants. There’s an enjoyable light comic touch to some scenes, but opportunities are missed. The film doesn’t tap Offerman’s comic timing at all, which is wasteful, and it would have been hilarious and made more sense to the motives of the brothers if McDonald’s was shown for the sagging grease trap that it is. Similarly, a speech about tapping into patriotism and church ever so slightly misses comedy gold by pulling back when we know Ray is the sort of man who would have nodded off before the first hymn. Michael Keaton is still a good well for dark comedy. This is the third film in a row, following Birdman and Spotlight, where he plays a man on the verge of extinction. The excitement he brings to the role is creepy and mesmerising; Ray’s body twitches so impatiently as though he suffers from ADHD and can barely contain himself from jumping to his next scheme. 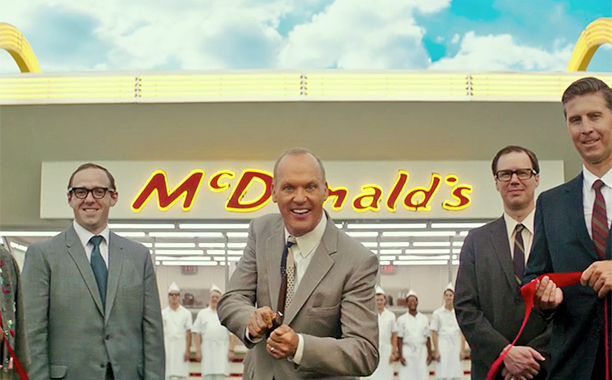 The film would have been more emotionally involving if it told the brothers’ story first and used Ray as its antagonist, while still encompassing the film’s most original ideas of class and aspiration. The brothers are not perfect people; they’ve tried their hand in Hollywood and failed. Dick is the more sensible and sceptical of the two, while Mac with his bad heart scratches the same itch for success that is clawing Ray. But the film is more interested in dramatising Ray’s fluctuating self-image and sense of inferiority, such as when he takes his wife (Laura Dern, good with little to do) to dinner at a wealthy country club and people scoff at his ideas for McDonald’s. These are presumably her connections since most would run through a busy intersection to avoid Ray. There is also one strong, insightful scene where Ray deludes himself into thinking he is a commoner and takes his wife to a place where they politely call the bingo numbers over a meat and two veg meal. But once again, the fine dining scenes could have been funnier if they amplified Ray’s inner hick in a sleeve-to-nose kind of way. You will yearn for the same character assassination as The Wolf of Wall Street and wonder why the brothers’ scenes are restricted to them losing control of their business through vicious phone calls with Ray.

Herein lies the problem with The Founder and its aims. It makes no secret that Ray was terribly neglectful of his wife and that he was a weasel and a con artist. But simultaneously, he is the film’s protagonist, emphasised through a slow-motion scene of people making a guard of honour for him, and over the end title cards it mentions all the people who rose to higher positions because of him. Ray wins everything both professionally and personally, so what exactly is the point? While the film stresses that wickedness can triumph, it still sidelines the real victims of its story. This is a film about corporatism and greed, but by respecting one of the biggest corporations in history and exploring individualism—Ray’s achievement and ego rather than the brothers’ fall—it relegates its emotion until a crushing finish and neglects its own comic potential. The film’s moral is true: the grip of big business is unshakable.

Summary: The Founder is an interesting story that focuses on the wrong person.