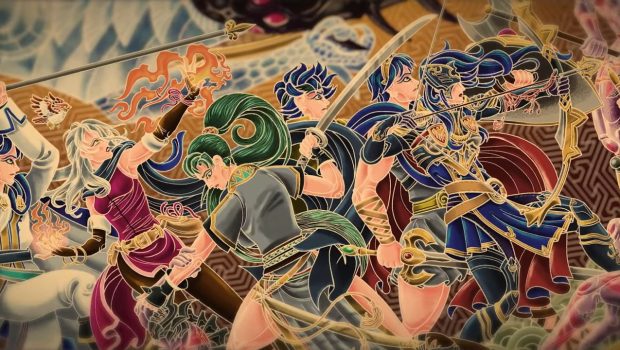 Once every 1,000 years, legendary heroes called Emblems grant incredible power to whoever holds the 12 Emblem Rings. As the ritual nears, Alear – the Divine Dragon – awakens to collect the rings and bring peace to the land. However, the Fell Dragon Sombron has also risen and seeks the rings for his own evil gain. Only Alear and those loyal to the Divine Dragon stand between Sombron and total destruction…

Players will command the army of the Divine Dragon through turn-based battles across the continent of Elyos. Each battle is different, requiring its own strategy and approach based on each unit’s strengths and weaknesses. Using the weapon triangle is key to winning battles as each weapon type has an advantage over another. In addition, both heroes and enemy troops that use special arts will gain an advantage over opponents with bows, tomes, and knives.

It’s important to plan attacks carefully when commanding each hero with their own moves and weapons while using the terrain, positioning and unique talents of the heroes to defeat the enemy across the grid-based battlefield. It’s also possible to collect Emblem Rings and employ them in battle to summon Emblems – legendary heroes such as Marth and Sigurd. Emblems both provide their skills and powers in battle and share their abilities with characters once the bond between them is strong enough.

In addition, players can tailor their experience with a range of difficulty options and game modes suited for all skill levels. Normal, Hard and Maddening difficulties await while those looking for a more laid-back experience can even use Auto-Battle to handle combat for them. In addition, Casual Mode sees fallen allies revived after a battle while they’ll be lost forever when using Classic Mode. If a player makes a major error in combat, they can use the Draconic Time Crystal to rewind and try again, regardless of the selected mode.

The Fire Emblem Engage Expansion Pass*, which includes four DLC packs that will be added over time, is also available at launch. The first DLC pack is scheduled together with the release of the game and will include additional Emblems, new accessories, and more.

Fire Emblem Engage launches today on Nintendo Switch. Players will awaken as the Divine Dragon and fight alongside legendary heroes to save the continent of Elyos from destruction.