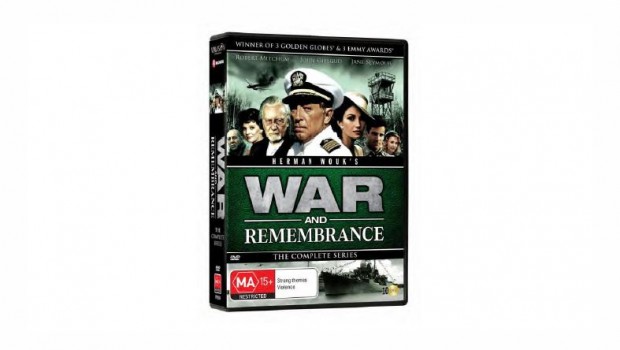 April 17, 2015 – Via Vision Entertainment is pleased to announce the release of War and Remembrance. The sprawling mini-series starring Robert Mitchum and Jane Seymour from Herman Wouk’s bestselling book of the same name will be available May 6. Prior to the mammoth production director-producer Dan Curtis had successfully brought to screen Wouk’s epic Winds of Wars, an 18 hour mini-series exploring the lead up to WW2 from the perspective of an American family. It concluded with the attack on Pearl Harbor. War and Remembrance, follows the ongoing saga of the Henry and Jastrow families from December 15, 1941 to August 7, 1945.

In the aftermath of Pearl Harbor Victor “Pug” Henry is assigned the command of a Cruiser, son Warren is assigned as a fighter pilot on an aircraft carrier, while son Byron is already serving as an officer on a submarine. Berel Jastrow is captured by the Nazis and taken to Auschwitz. In Naples Italy, Natalie Henry, her son Louis and her Uncle Aaron Jastrow await aboard a refugee boat bound for Palestine. But Werner Beck, a German diplomat and Aaron’s former student, convinces Natalie to return with her family to Siena.

Across 32 hours this lavish $110 million production maps the intimate and epic stories of these characters on a scale not seen before on network television. It’s a feat not likely to be replicated. The last of the giant mini-series War and Remembrance is the costliest single story undertaking in United States Television. The script took more than a year to complete, location scouting spanned two years and production lasted some 21 months with filming in 10 countries including the first production granted access to the Auschwitz concentration camp in Poland.