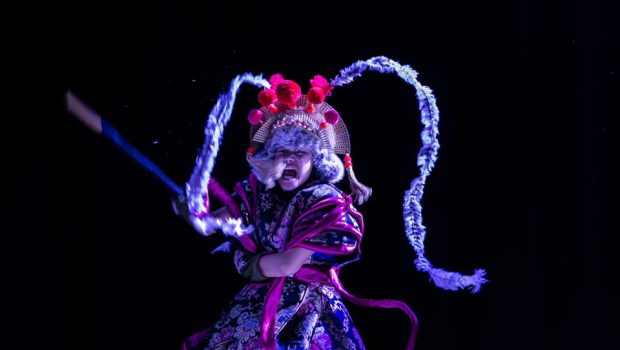 THE ENLIGHTENMENT OF THE SIDDHARTHA GAUTAMA BUDDH… Review

Summary: Monkey Magic except set in modern times and Monkey is a lesbian. C'mon! You know this story by now!

The nature of Monkey was irrepressible!

Journey to the West better known as Monkey Magic for anyone who grew up in the 1980s in the UK or Australia has had more remakes than any other series before IP Man came along in China so it is difficult to really add much to it. At one point there were two competing blockbuster franchises being released at the same time which is like if someone else tried to make a completely different Lord of the Rings while Peter Jackson was making his. Given this book is hundreds of years old and public domain it is a lot easier to do.

Having seen so many versions of this I can pretty much watch it now without even needing subtitles as I know what is going to come up when.

In this version the two main protagonists Prince Siddhartha and the Monkey King are reimagined as women in contemporary Australia and the marshals of the Heavenly Host are police officers.

Monkey is a rapper and viral internet star in this version who has always had to struggle.

Princess Siddhartha is the daughter of a crime family who hooks up with randoms from an app but does not seem to have a purpose in life. This changes when she meets Monkey and feels head over heels for her. Unknown to her the Monkey is being watched by forces unknown the Marshals of the Heavenly host are on her tail. There is something big coming and it might not work out well for some of those involved.

This was a very unique and interesting take on this story and a great revamp of the story which is well known if you are familiar with the source material. I particularly liked the chance to get to hang out with the Marshals of the Heavenly Host as it would have been great to have some Sandy and Pigsy episodes in the original Monkey Magic TV show. Monkey was the star back then but Maasaki Saaki was already a famous actor and rock star by then so he had to look good.

Having Siddhartha and Monkey played by women is not as big a change as you would think as gender was fluid in the originals and the gods could “appear in the form of” either a woman or a man as they pleased. Monkey had mastered the “72 transformations” and was always turning into women on that show.

Merlynn Tong was great as Monkey and it is a very physical role which she did well in. There is one big scene where she did get to do the full Monkey costume which you don’t want to do straight away or it would lose the impact. I remember the Stephen Chow Journey to the West movies where he does not become Monkey until the second movie.

John Marc Desengano and Conor Gallacher as the police/Marshalls of the Heavenly hosts worked well together and you did see how their personality matched those of Sandy and Pigsy although this is set before the main events of the Journey to the West.

Emily Tomlins was the narrator and various other characters related to the story when it was required. Only having a few people worked well as long as you sell it you just need to change your wig and costume and you can be a different person. Reminds me of how many times Jackie Chan turned up in the fight scenes in Enter the Dragon as a random thug (at least 5 times).

There were subtitles at the side of the stage in Mandarin and I think they had different meanings as there were people in the audience laughing at odd times. Much as a lot of Hong Kong movies have jokes based on language puns that only work if you are fluent.

I did like the staging with a lot of drapery used and flowing cloth when needed. There were some projections with graphics by Badiucao which were a bit difficult to see but some of the main ones got a good laugh in sort parts like the eggplant one in the sauna.

There is a lot in the story to take in a short time and it was good they went into more the origin of the story and beliefs rather than trying to tell all of the Journey to the West as it would be too much.

The run has finished in Melbourne for now but they are hoping to take it over to Perth for a season in July and are looking for sponsors.

I would recommend this show if you are a fan of the Monkey/Journey to the West story and want to see a different take on it.

Fundraiser to take the show to Perth

Presented by Darebin Arts Speakeasy as part of FUSE