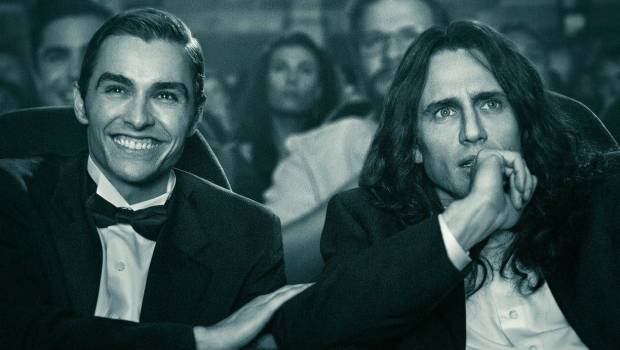 “You’re tearing me apart!” When one hears this line these days, aside from thinking that the person saying it is crazy beyond belief, what film do you think comes to mind when one says that line? Would it be the classic 1955 film Rebel Without a Cause, starring James Dean? Or would it be the 2003 cult classic film by multi-talented (you in the back, don’t laugh!) filmmaker Tommy Wiseau? The chances are that it’s the latter.

For those who don’t know about The Room, it is a 2003 film that has gained cult classic status (or is it classic status?) due to how incredibly awful it is. The filmmaking, the acting, the production values and the plot all amount to something that is so terrible that it actually becomes brilliant by how hilarious and strangely mesmerising it all is. It’s as if Wiseau shot for the stars but not only did he not make it up there, he fell so hard that he crashed through planet Earth, tumbled through the core, crashed out from the bottom of the Earth and came upon the stars anyway.

Now we have The Disaster Artist, a film by director/actor James Franco that is based on the book of the same name, co-written by Greg Sestero, who acted in The Room. Unlike the source it’s based on, it received critical acclaim due to the heartfelt and hilarious portrayal of the events that happened behind-the-scenes. Written by talented screenwriters Scott Neustadter and Michael H. Weber (500 Days of Summer, The Spectacular Now) and featuring a wealth of acting talent, The Disaster Artist looks to be a good one. 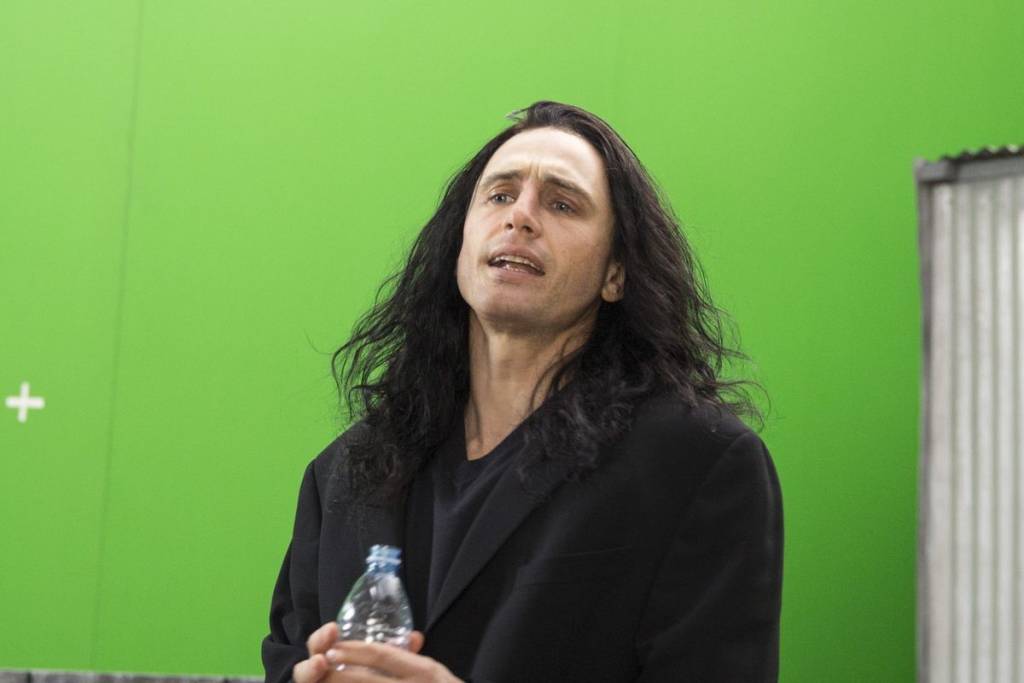 In 1998 in San Francisco, the film starts off in an acting class (headed by Melanie Griffiths of all people) and we see Greg Sestero (Dave Franco) an aspiring actor who’s having stage fright. He is then wowed by a performance from his eccentric and fearless fellow acting student Tommy Wiseau (James Franco). Hoping to learn from the mysterious Wiseau, Greg and Tommy strike up a friendship due to their shared passion in acting and James Dean (who has been portrayed by James Franco before) and eventually move to L.A. to try and make it as actors.

When they both struggle due to a lack of experience and/or drive, Greg suggests they should make their own movie. Tommy is wealthy, but the source of his income is as much of a mystery as his origin and his age (he claims to be 19 and from New Orleans, despite a blatant European accent). He backs the movie and writes the script, directs it, and stars in the lead role. With production on The Room underway, Greg and Tommy’s friendship begins to fall apart due to Wiseau’s direction, in many senses of the word.

For The Disaster Artist to truly work as a film, it needs to have two things down pat. Firstly, we have to empathise with the lead character and his/her ambitions and motivations. Secondly, we must be immersed in the spirit of the character, regardless of how much we know about him/her. Fortunately, the film sticks the landing and provides a funny and sincere look at the making of The Room as well as the relationship between Wiseau and Sestero. 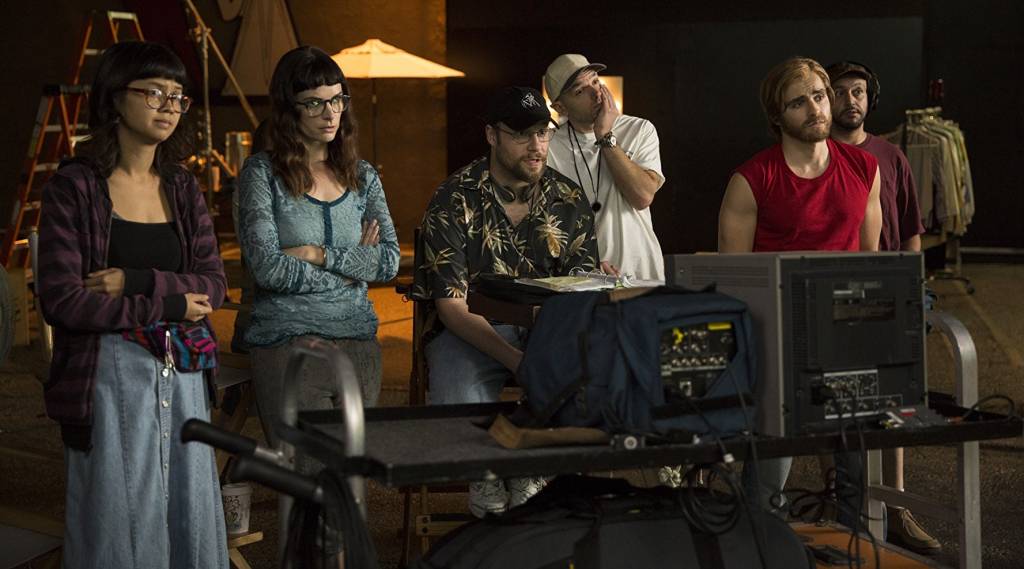 It becomes very clear that the involvement of scriptwriters Scott Neustadter and Michael H. Weber was a big asset to the project. The sensitivity and heart that they have contributed to their previous projects, such as The Fault in Their Stars, The Spectacular Now and Our Souls at Night, is very much present in The Disaster Artist. We understand the ambitions and insecurities of both Wiseau and Sestero. What clinches it though is the chemistry between the Franco brothers. Despite being nothing like the people they are portraying, their brotherly love translates strongly into the film and makes the relationship between Wiseau and Sestero convincing, affable and even lovable.

James Franco is a wonder as Wiseau, as he takes all the eccentricities and oddities of Wiseau and portrays him as a three-dimensional human being with whom we can laugh with and empathise. He nails the accent and the look while also keeping the enigmatic presence in check. Dave Franco is great as Sestero. At first glance, it may be a thankless role of being the straight man reacting to all the craziness, but he does it really well and provides a great proxy for the audience.

Speaking of proxies, Seth Rogen is a great one, playing Sandy Schklair, the script supervisor and eventually the ghost-director. He points out all the problems with the production and he does it with hilarious aplomb. The supporting cast includes our very own Jacki Weaver, as well as Josh Hutcherson, Zac Efron, Hannibal Buress, Charlyne Yi, Sharon Stone, Melanie Griffiths and many more; they make the most out of their variable screen-time, displaying moments of pure shock and disbelief, and earn many laughs. 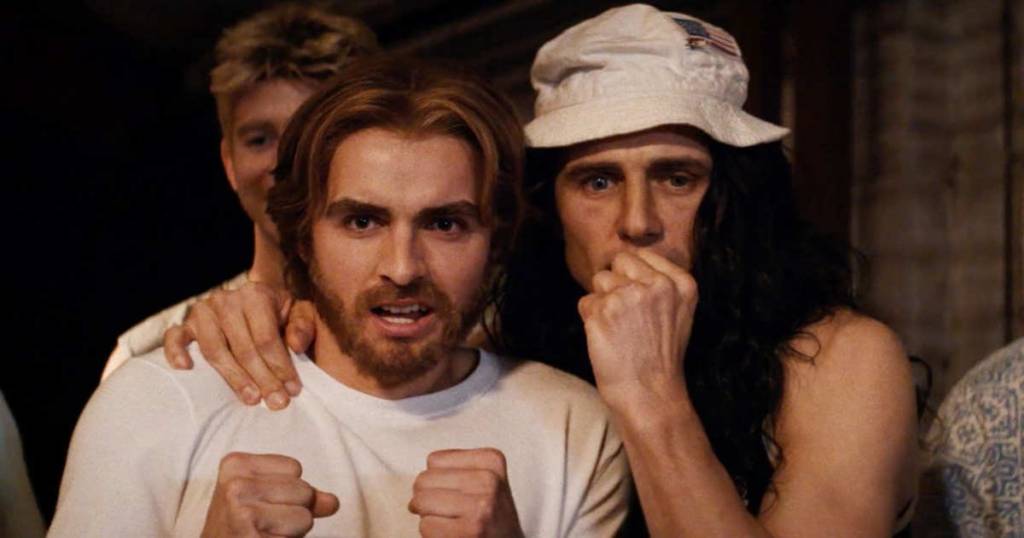 That’s not to say that the film shies away from the darkness of Wiseau, specifically his arrogance, his terrible working habits like showing up late and treating his cast badly (including the non-catering of basic human necessities like water), and his jealousy of Sestero; the film delves into this side of Wiseau and bares it all. For example, Franco literally bares it all in a scene where he treats one of his co-stars badly due to her appearance. The scene culminates into a free-for-all between him and his crew and it becomes quite captivating and compelling. The scene makes it perfectly clear that the making of The Room wasn’t all peaches and cream.

Although The Disaster Artist maintains a great reverence for The Room, the film can be seen as a funny comedy about how such true-to-life absurdities can be a catalyst for such a terrible yet mesmerising piece of art. However, the film can also be viewed as an experience about what can be defined as art and the sheer commitment to accomplishing said art, and it is clear that Franco believes in that.

There’s a scene in The Disaster Artist where Jacki Weaver’s character comments on why she continues showing up to the set despite her advanced age and terrible working conditions. She says, “The worst day on a movie set is better than the best day anywhere else”. On that note, The Room was worth the pain, as there is nothing more noble than not only finishing what you started, but to own it, despite what people think. But enough about my review. Anyway, how’s your sex lives?

Summary: The film sticks the landing and provides a funny and sincere look at the making of The Room as well as the relationship between Wiseau and Sestero.