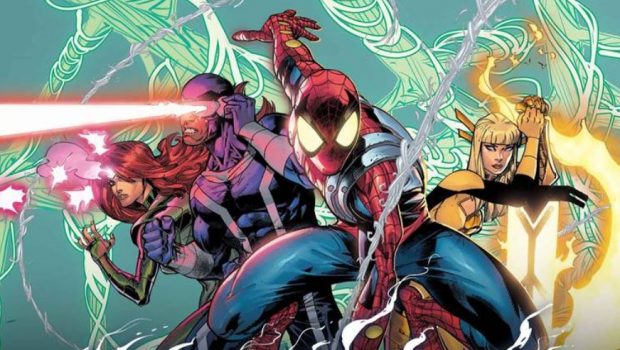 New York Comic Con was buzzing with excitement for DARK WEB! The audience at the Marvel Comics: Next Big Thing Panel witnessed the level of havoc Madelyne Pryor and Ben Reilly will unleash on the Marvel Universe this holiday season in the all-new DARK WEB trailer. The two spurned clones will team up as Goblin Queen and Chasm to reignite the embers of INFERNO in a saga starring the X-Men, Spider-Man, Venom, Ms. Marvel, and more! The crossover will officially start this December in Zeb Wells and Adam Kubert’s DARK WEB #1 and then dramatically unfold across ongoing titles AMAZING SPIDER-MAN and VENOM as well as limited series DARK WEB: X-MEN, DARK WEB: MS. MARVEL, MARY JANE & BLACK CAT, and GOLD GOBLIN. The exhilarating trailer provided a never-before-seen sneak peek at all the action to come including Chasm and Goblin Queen’s opening attack, the demonic invasion of New York City, an amazing friends team-up, and so much more! This far-reaching epic promises to leave a scar on the Spidey and X-Men mythologies and that’s not all! DARK WEB’s impact will also result in two just announced series: RED GOBLIN and HALLOWS’ EVE!

An all-new symbiotic saga begins in Alex Paknadel and Jan Bazaldua’s RED GOBLIN! Spinning out of the pages of both DARK WEB and Al Ewing, Ram V, and Bryan Hitch’s VENOM, this new ongoing series will see Normie Osborn receive his own symbiote at last! As a new Red Goblin, will Normie fulfill his destiny as an Osborn – or will he and his symbiote be able to make a difference for the better?

Making her devilish debut in AMAZING SPIDER-MAN #14, new villain HALLOWS’ EVE is set to play a major role in DARK WEB. And as the event comes to a close, Spider-Man will discover this is one baddie that is sticking around! The newest addition to Spidey’s unmatched rogues gallery will star in her very own limited series this March by writer Erica Schultz and artist Michael Dowling. Stay tuned for more information!

Check out the trailer now and embrace the chaos of DARK WEB this December! For more information, visit Marvel.com.