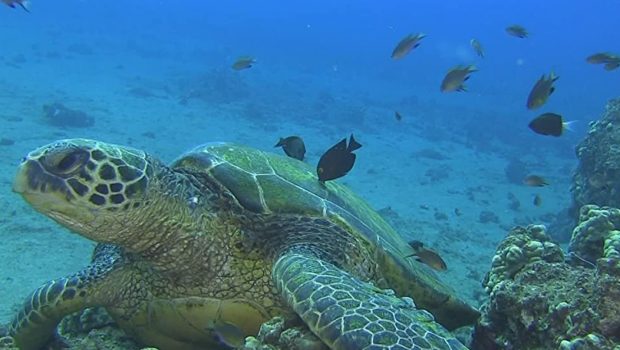 Summary: A very biased documentary that ignores important facts that do not support its' world view. Maybe skim it if you are interested but don't expect much.

This documentary explores the global tropical fish aquarium trade as it effects Hawaii and the people trying to stop it. There has already been some blowback on this documentary even from looking at the comments on the trailer. There are some issues with it I thought but I will go into that.

I do have somewhat of an interest in the environment and ocean issues and often listen to Radio Marinara on RRR FM on Sunday mornings so I know a lot of the issues affecting the reef ecosystem already. For some reason this documentary does not mention climate change at all or other things such as coral bleaching, rising sea levels or the raise in water temperature that are a big impact on the reefs in Australia. Strange that it does not mention the situation on the world’s biggest reef, only using examples that suit the documentary.

Robert Wintner seems to be pushing his own barrow and acts like that the fish are “his” fish as he runs a dive company. To be sure more people can make money if you leave the fish where they are through tourism but they surely belong to the environment and not just to one person.

They do mention the indigenous peoples of Hawaii but it seems to be just a surface discussion with the “fish have feelings” stuff from the PETA PR person taking up a lot of screen time.

You can also place the timeline of this documentary squarely in the Trump presidency where the government attempted to dismantle a lot of environmental protections. I can’t think of anyone being able to go in and harvest reef fish on the Great Barrier Reef, they would tie you up and feed you to the crocodiles. Granted, they are trying to make a massive coal mine right near it, but they wanted to do that in the 1980s too.

If I was a scientist who contributed to the documentary I would be pissed off how they have skewed the words of the experts and mixed them in with animal rights extremists who do not want animals exploited at all. Better managed all parties can benefit including the environment.

I would recommend this documentary if you want to know more about the tropical fish aquarium trade but just don’t expect anything impartial.