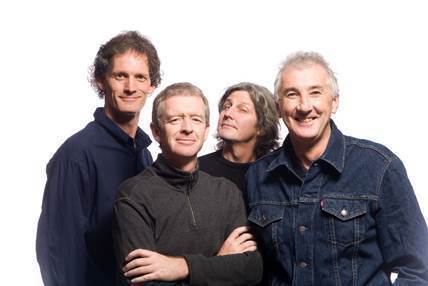 In 2017, The Coodabeen Champions are returning to their “Best on Ground” venue, Arts Centre Melbourne on Sunday September 3, Father’s Day to tell a swag of stories and sing songs about the game they love. This year for the first time, Covey, Champs, Billy and Richo will appear on stage with members of the Footscray – Yarraville City Band.

The Coodabeen Champions presented their inaugural Arts Centre Melbourne show to a full house in 2014 and returned in 2015 and 2016 with sold-out performances. The much-loved comedic broadcasters are limbering up for this year’s Father’s Day performance and make no mistake, they’ve come to play and will have a red hot go.

Featuring live footy talkback, witty interpretations of hit songs and their much-loved and hilarious brand of footy lexicon, the boys will have all their skills on display and go straight up the guts. This special live show will showcase new material and of course, all the old favourites: Pearl from the Peninsula, Peter from Peterborough, Nige from North Fitzroy and Guru Bob.

“Now we’ve reached the fourth year of performing at Arts Centre Melbourne we can truly call this a ‘time-honoured’ event,” the Coodabeens said.

“Under our formula, the first is the inaugural, the second is annual, the third is traditional and then anything after that is, indeed, time-honoured.”

When The Coodabeen Champions hit the 3RRR airwaves in 1981 with their simple formula, they broke new ground for sports coverage. And, a bit like the AFL teams of today, the Coodabeens did their share of building the playing list. In an ever-changing footy world, the group have remained one of the truly enduring constants thanks to an engaging combination of footy knowledge and in-the-outer experience.

The Coodabeens and their ever-popular show on ABC Radio Melbourne have managed to stay at the top of the game through four decades and they’re still riding high on the airwaves without ever bottoming out or being the subject of tanking allegations.

Irreverence, wit, humour and the odd tall story will be the order of the day when the Coodabeens take the microphone in the intimate confines of Arts Centre Melbourne’s Playhouse Theatre this September.