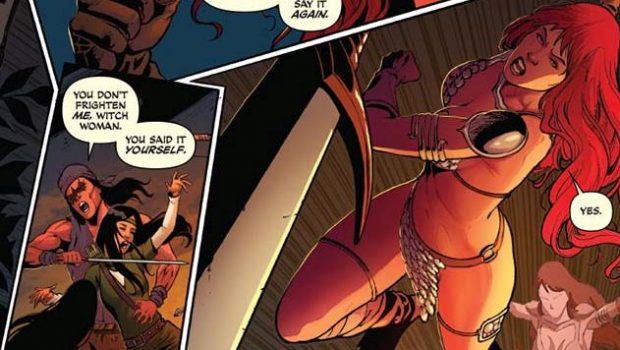 Summary: The story of Red Sonja now in collected omnibus form with all of her adventures by writer Gail Simone in the one place.

The story of Red Sonja now in collected omnibus form with all of her adventures by writer Gail Simone in the one place.

The character is well known in the Conan the Barbarian universe and is not really meant to be a female version of the Conan more her own character. Her chainmail bikini is explained by the fact that she hates wearing clothes. The one time other people make her wear a dress she complains. She is frequently drunk and does not fear death but seems to be looking forward to it somehow. Although most people call her Red Sonja she prefers to be called the Devil and one point digs a grave for herself she is so bad-arse.

Big Arnie famously makes his staffers watch the movie adaptation of Red Sonja he was in if they make a mistake but I would like to see film adaptation of this version of the story.

A warning that this story is aimed at the mature reader due to the graphic nature of the story with a lot of limbs and heads being removed. The language is hard-bitten buy there is not much cursing considering everything else going on in the story.

Great art in this one and well worth getting even for that as they handle the action in this well and the figure drawing of Red Sonja and the other characters is excellent. It is fantasy based so there are creatures but mostly it is grounded in reality with the artwork.

I would recommend this one if you like fantasy adventure stories and don’t mind something with a female protagonist. She can look after herself and spends most of the time saying she does not need anyone’s help. When she does accept help, it is usually only begrudgingly or she is nearly dead.

I would rank this as one of my favourite collected editions this year alongside the Aliens vs. Predator collection.