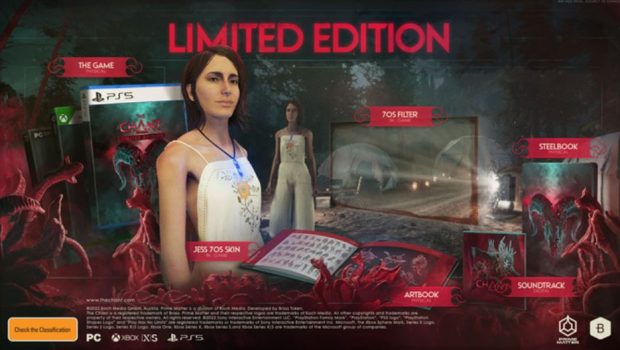 THE CHANT: MEET THE STARS BEHIND THE COSMIC HORROR

Watch the fresh and finest short film that will enlighten you on the depth and psychology of The Chant’s colourful cast of twisted characters.

Find out what brought each of them to the Prismic Spiritual Retreat on remote Glory Island. Learn how their minds work, understand the deep darkness within each of them and follow their terrifying journey.

For the first time, the performers reveal what it was like to bring their characters to life in the upcoming horror action-adventure game, The Chant.

We begin with our lead character. Jessica Briar, performed by Siobhan Williams, is asked by her friend Kim Mallari (played by Kira Clavell) to come to this remote Glory Island on a spiritual retreat. Jess is happy to take a few days away from the city and her stressful life and career. Why not?

Considering herself someone who is willing to try new things, she is also ready to deal with some much needed closure from a traumatic event shared with Kim from their teenage years. What she does not know is that she will be forced into a new way of thinking in order to survive the horrors at hand.

What happens on Glory Island…

Kim´s been looking forward to the retreat ever since she first heard Tyler Anton (actor Adam Millard) talk about it at one of his seminars. Since becoming a student of Tyler, she has felt more alive than ever. She is very grateful that Tyler allowed and even encouraged her to invite Jess to join, but is Tyler the healing, powerful and spiritual leader he claims to be?

He inherited the island from his troubled mother and now he’s ready to welcome a small group of followers for a transformational journey into Prismic Science. Definitely, the sign he’s been waiting for. It’s time to leave his mark on the world and maybe even the cosmos.

Hannah Wilson played by Emily Tennant, feels nothing but excitement at the thought of welcoming the retreat attendees. She has spent the past several months as Tyler’s right-hand; never before has she experienced such a sense of belonging.

Maya Kalani (voiced by Nicole Anthony) is on the island because she believes this retreat is her first step towards confronting her scars from her past to find true healing. In her wandering she met Tyler, whose keen eye saw her pain and enrolled her in the retreat with ease. She embodies a special spirit and energy.

Since connecting with Tyler, Sonny Sonti (Praneet Akilla) has decided to channel his energy (and some family wealth) towards his vision to help promote Prismic Science and create a movement. This is his chance to find greater meaning and leave behind a pattern of broken promises and self-destruction.

Multiple characters, multiple reasons to be there. One interconnected journey that will avow the strengths and weaknesses of each of the spiritual retreat attendees on Glory Island.