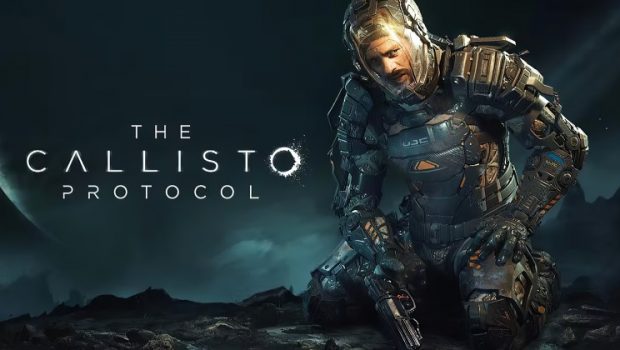 The Callisto Protocol is a survival horror game that, on paper, sounds like a winning combo.

Unfortunately, I found The Callisto Protocol to be an unimaginative, by-the-books zombie shooter that leans heavily on its looks while playing things far too safe in the story and gameplay departments.

The initial premise seems promising enough: Set in 2320 within the bleak setting of Black Iron Prison, a harrowing and shadowy facility of the enigmatic United Jupiter Company (UJC), protagonist and freight pilot Jacob Lee is imprisoned after his shady shipping run is intercepted by a terrorist group and crash lands on Callisto, one of Jupiter’s many moons. What ensues is a rapid-fire opening of panicked screaming, ominous threats and gratuitous murders as the prison is engulfed by an infectious outbreak of unknown origin, which Jacob scrambles to escape. I wish I could gush about the story, or point out deeper, satisfying intentions behind the narrative, but sadly there’s almost nothing to elaborate on after an otherwise intriguing opening sequence.

The atmosphere is immediately and appropriately tense thanks to the unmitigated chaos and gore-splattered halls of Black Iron Prison, but the story, which takes 6 – 15 hours depending on your chosen difficulty setting and exploration of the few optional pathways, never feels like it stops to breathe and fully establish its characters or their motivations – particularly Jacob. You’re funneled hurriedly through the claustrophobic corridors of Black Iron and other dangerous facilities with minimal exposition or narrative guidance on what the stakes are, how the deadly outbreak occurred or why Jacob was imprisoned in the first place.

Now, throwing players straight into the fire, in an isolated setting with creepy environments filled with otherwordly monsters is a trope of the survival-horror genre that usually work wells – but only if some semblance of an interesting story gradually reveals itself. That is not the case here. 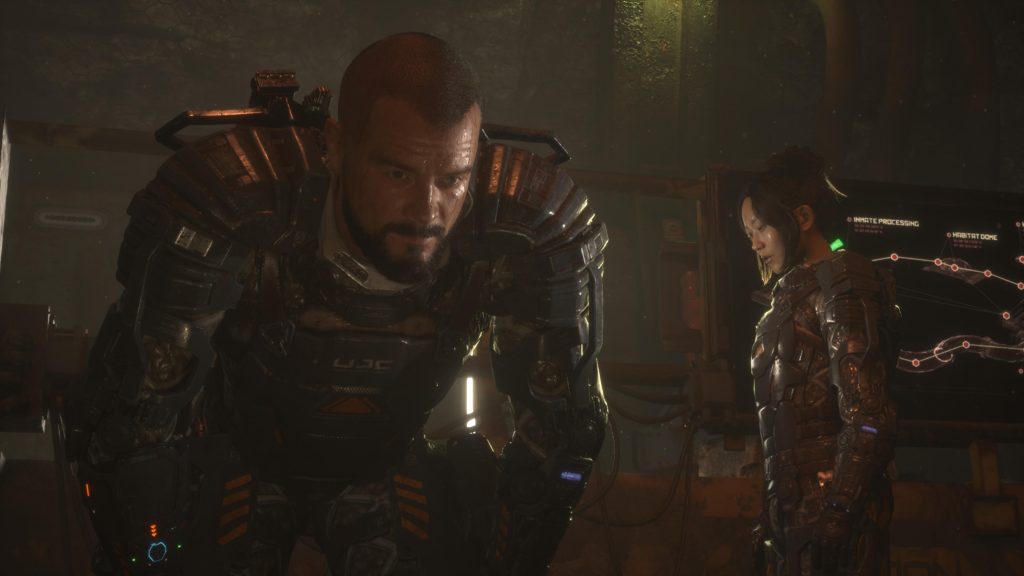 I do not exaggerate when I say the majority of dialogue among the main cast consists of talking about the next objective, and Jacob acts like a cyborg in disguise, barely reacting to the terrifying ordeal before him like a normal person would. There is no character development, personality, or intrigue about the virus – and ultimately, little reason to care about the dull plot or cast, which felt crazy to me, given the interesting setting and possibilities (what about other surviving prisoners, or people working in orbit, for instance?) By the final hours, when revelations about the cause of the outbreak finally come left and right, none of the ‘twists’ land because motivations and emotional connections are never established.

The audio logs you can pick up across chapters, which should fill in the blanks, consist of offensively generic dialogue and inane horror tropes (“What was that noise? Ahhh!”) and provide little to no world building or lore that could expand the setting or provide optional context for players who seek it. The environmental storytelling is equally hollow and full of cliches (why are there spikes or graffiti made with blood in every second room?), and worse yet – most of the scares are delivered in cliche jump-scare form, dozens of times over, despite pre-release interviews claiming the opposite. This is a single-player game where the story should motivate your journey, but unfortunately, it doesn’t.

That leaves gameplay to save the day, and isn’t that why most of us play survival horror games? 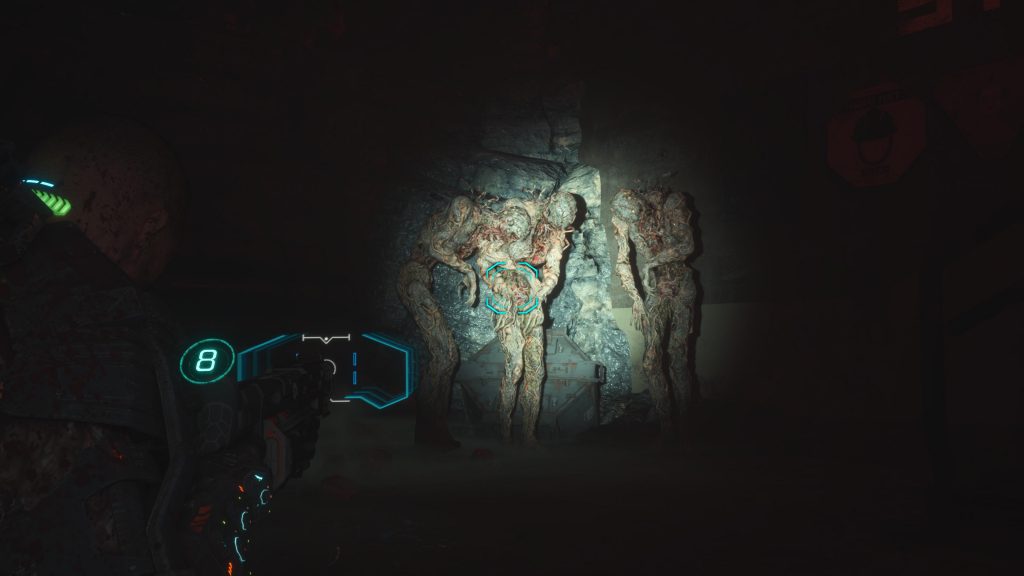 Look, I think The Callisto Protocol does deliver on its promise of satisfying gore-splattering combat, at the very least. You control Jacob in an over-the-shoulder, third-person perspective, killing zombie monstrosities up close and personal with a stun baton and a small number of firearms (three pistol variants, a shotgun, an assault rifle and alternate fire modes). The game places its core emphasis on melee fighting, where you have to follow a rhythm of stick presses to avoid enemy attacks and strike with a string of heavy or basic attacks, or shoot enemies when they are left open.

I found the timing required for this combo system to be simple to use but difficult to master (accessibility options can ease this, however). Most combat encounters pit you against small groups of zombies that pop out with jump scares, but later levels have hordes that challenge the limitations of the game’s melee-focused combat design, as Jacob feels slow to turn or sprint away, and the dodge mechanic and stiff camera can’t keep up with more than one enemy. Still, combat in The Callisto Protocol feels generally tense and provides a satisfying challenge as every enemy is a genuine threat.

Guns, meanwhile, feel satisfying in their destructive potential (you can shoot off limbs, blast tentacles and decimate the bodies of zombified colonists to smithereens), with ammo and resources suitably scarce until the second half of Callisto, when you gain access to new guns, optional schematics, and credits to spend on upgrades to increase your survivability. The most unique option is the GRP, a gravity glove with a limited battery that pulls enemies and objects toward you, or fling them into dangerous parts of the environment (i.e. the spikes placed everywhere). The GRP is easily Callisto’s coolest idea in the combat department, as while there’s some variety on offer in the upgrade trees for each weapon that accommodates slightly different playstyles, the options feel scarce compared to similar titles in the same genre, making the second combat-heavy part of the game tiresome. 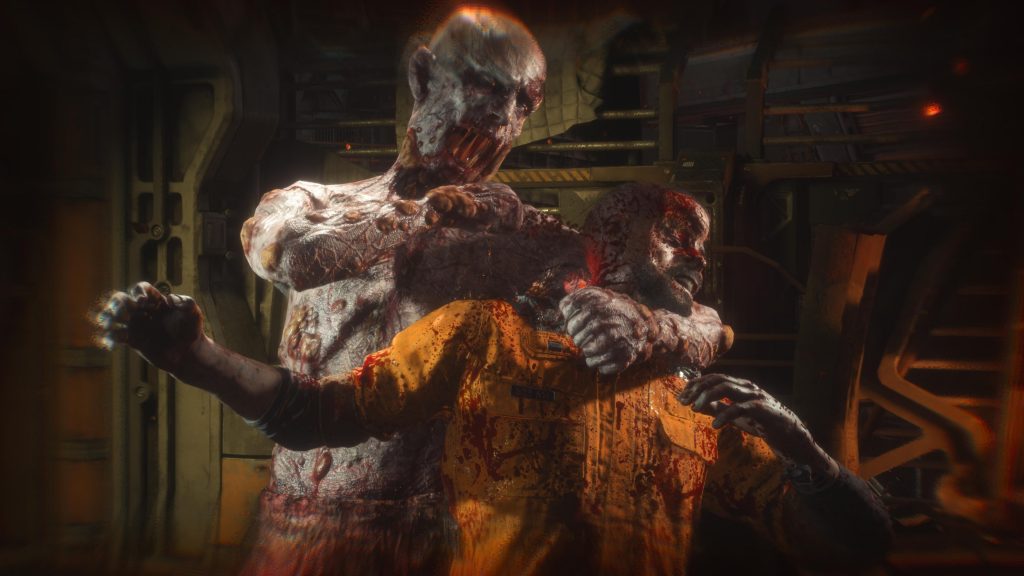 But boy, is the violence and destructive potential on offer here gratuitously creative. As Jacob, and you’ll be hacking, slashing, bashing and stomping sickening undead creatures to death with shocking, detailed violence that will no doubt please a certain segment of players. This goriness extends to the death animations made for Jacob, which play when you lose a fight, of which there are many throughout the game. The sheer bloody detail put into these segments is equal parts impressive and disturbing.

One disappointment I had is every enemy ends up being an uninteresting variation of a generic fleshy zombie or mutated crawler (think bargain bin clickers in The Last of Us or zombies from Doom), which eventually lead to predictable combat encounters – though their generic fleshy forms makes them perfect candidates for player-led brute violence of the curb-stomping and smashing kind. There are some encounters with other non-zombie enemy types, but they are bizarrely underutilized.

Where its uncompelling story or straightforward combat fails to impress, Callisto’s graphics and presentation delivers in spades. This is a fantastic looking game that pushes the limits of the PlayStation 5 and Xbox Series X, with high-quality textures, high fidelity model rendering and animations, and cutting edge lighting and shadow work. Characters are brought to life with motion capture and detail, as are the monstrous mutations of the Biophage. Both next-gen consoles offer the option of a quality mode (30fps with highest level resolution and ray-tracing) and a performance mode (60fps with decent resolution and no ray-tracing); having played through both, Callisto is a feast for the eyes with the right television setup in either mode. 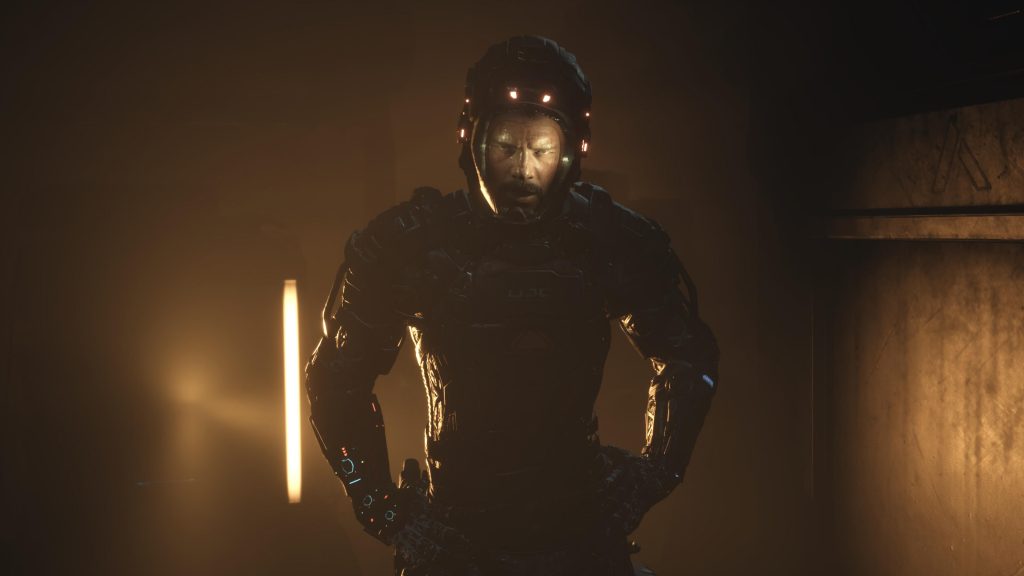 The game makes use of Hollywood actors, with Josh Duhamel and Karen Fukuhara playing Jacob Lee and Dani Nakamura, respectively, and Unreal Engine 4 transfers over their charismatic likenesses to uncanny levels. Voice acting, despite the leading talent, is let down by a generic script, though Fukuhara in particular does her best job to elevate the stakes.

All in all, The Callisto Protocol ended up taking me around 15 hours to complete on the hardest difficulty setting. The game is mostly a linear experience with a few side paths containing optional upgrades, audio logs or resources, and without a New Game Plus or additional modes after the main story is complete, any replayability value depends on whether you want to experiment with some of the harder-to-find guns. But after an underwhelming final boss fight and unsatisfying narrative conclusion, it’s hard to recommend the game as anything more than a one-and-done. 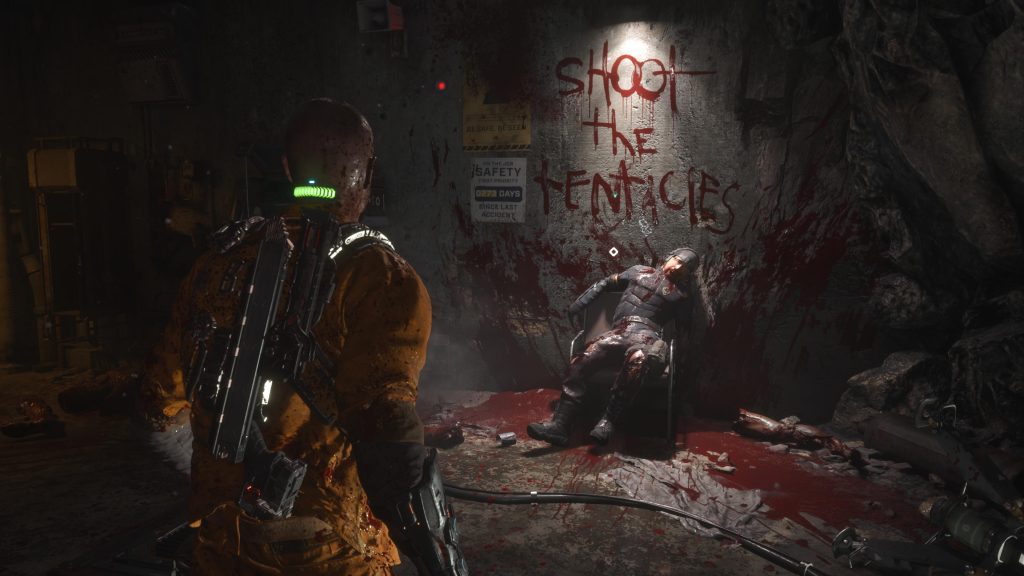 The Callisto Protocol offers a promising premise, but fails to deliver a satisfying or unique survival-horror experience. Its extremely underdeveloped story and standard-fare combat systems lack originality or willingness to execute ideas outside of the usual sci-fi tropes and third-person shooter conventions. However, it is undeniably a visual marvel in its presentation.

If you are a fan of Dead Space, manage your expectations. If you are the type of gamer who doesn’t mind linear, popcorn-ready triple-A games that look good on the big TV and offer straightforward blasting and smashing zombies, Callisto could offer some braindead fun – for a night or two. 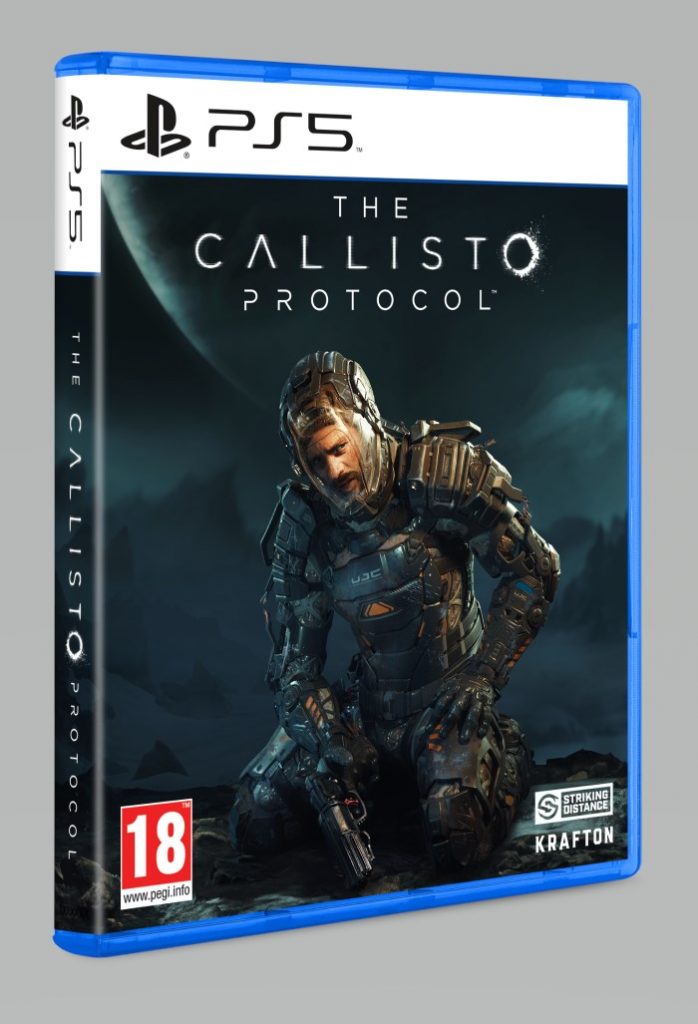