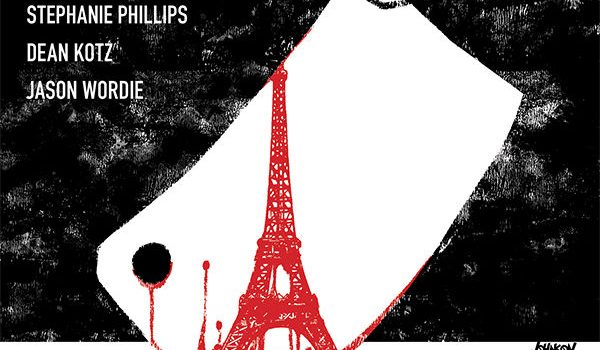 The Butcher of Paris #1 Review

Summary: Phillips and Kotz immediately pull the reader into a gruesome, unbelievable true story about a serial killer in Nazi-occupied France.

Stephanie Phillips does an excellent job in managing her ensemble cast, introducing new characters at a rapid pace and still managing to give each a unique voice and perspective. More impressively, she shows a keen ability to consistently hammer home the tale’s major thematic touchstones while simultaneously weaving the plot threads together. The major theme seems to focus on the many forms that monsters can come in and the myriad ways in which their victims find themselves trapped in their deadly webs.

Of note, Phillips utilizes a striking dichotomy which lends itself strongly to this theme. The dichotomy lies in how mundanely the Nazi occupation is treated by the French people paralleled with their disgust for the titular Butcher of Paris. The Nazis are the bigger monsters here, responsible for the deaths of millions and the forced occupation of an entire country, yet they are treated with apathy by the French people in this story. When the Nazis are arresting a Jewish man on false pretenses and striking his wife in a police station, the strongest reaction that our apparent “hero” Detective Massu can muster is a half-hearted protest and an impotent “I don’t like it.” On the opposite side of the spectrum, when the Butcher’s lair is discovered, the French police are sick to their stomachs and a huge, morbidly curious crowd gathers to get a glimpse of the carnage. At one point, an officer even seems to revel in the killer’s body count (eighteen, a drop in the bucket compared to the monstrosities of the Holocaust). It’s in this contrast, where the populace shows less disgust with the slow rise of Nazism and their systematic genocide than a simple serial killer’s crimes, that the people are implicitly falling into the larger monster’s trap.

On the other hand, if I have one particular criticism of the issue, it is the choice to include a brief outline of the setting and plot on the very first page. After this page, Phillips hits the ground running (almost literally) as the issue opens with a man sprinting past Nazi banners under the shadow of the Eiffel Tower. There’s an efficiency to the storytelling in these opening pages that immediately tells the reader when and where the story is set. It’s this sort of efficiency that makes the credit page’s “precap” of the setting and premise unnecessary and ultimately hinders the reader’s ability to watch the events of the issue unfold more naturally. It’s a minor thing, but the choice to include this “precap” undercuts Phillips’ storytelling prowess. 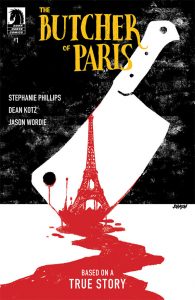 Artist Dean Kotz and colorist Jason Wordie prove to be a strong pairing for this dark tale. The artwork is marked by a grimy looseness, which really lends itself to events of the issue. The character’s faces are all drawn with loose linework and a liberal use of shadows, which really feeds into the themes and general feelings elicited by the issue. Importantly, these thematic art choices never hurt the reader’s ability to understand the action or the emotion being portrayed. One particular panel that stands out occurs relatively early in the issue, where we’re unknowingly introduced to the serial killer. Kotz does an excellent job with this panel, as the Butcher’s true nature almost seems to leak out from beneath his guise as a well-meaning doctor. The killer leans forward in his chair, touching his fingertips together and grinning. The image is creepy and unsettling, giving the reader their first indication that this man is more menacing than he appears. It’s these sort of artwork choices that really enhance the story and showcase the advantages of the visual comic book medium.

One last thing – I can’t talk about the book’s art without mentioning the issue’s cover. Dave Johnson’s work is striking and truly entices the reader to find out what’s inside.

This creative team does a fantastic job in taking a little-known true story and delving deep into the effects that real-life monsters have on people – whether they be occupying Nazis or manipulative serial killers.