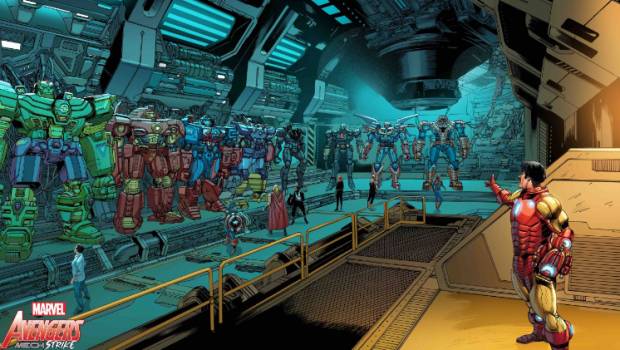 A brand-new enemy has emerged in the Marvel Universe and even Earth’s Mightiest Heroes are no match against it. But the Avengers aren’t so easily beaten, and when new threats arise, powerful new tools must be brought to bear! Suiting up in high-tech individualized armor, the Avengers stand ready for one of their greatest battles yet in the extraordinary new comic series, AVENGERS MECH STRIKE!

Written by Jed MacKay (Black Cat) with art by Carlos Magno (Fantastic Four, Empyre: Avengers), AVENGERS MECH STRIKE will kick off a bold new age of action-packed Avengers battles that will send shockwaves throughout the comic book industry and beyond! Uniting against an unstoppable enemy, AVENGERS MECH STRIKE #1 is just the beginning of this epic story that will unfold throughout next year!

“Heavy metal! When the Avengers come up against something that defies their usual methods, new tools are needed for the job: giant robot suits,” said MacKay. “It’s been a blast to take on the Avengers and really put them in the thick of it. When you’re dealing with the Avengers, everything is big. Big action. Big stakes. And now, big robots!

“We’re going for non-stop, full-bore action, with a lineup of Avengers favorites going up against an unexpected new foe…that might end up being quite familiar! Aliens, robots, dinosaurs, Martians…it’s going to get worse before it gets better for our heroes.”

Behold your first glimpse at these instantly iconic new suits on Kei Zama’s cover below and stay alert for news about the AVENGERS MECH STRIKE program, featuring comics, digital content, and more exciting products to be announced in the coming weeks and months! For more information, including a special teaser video, visit Marvel.com.