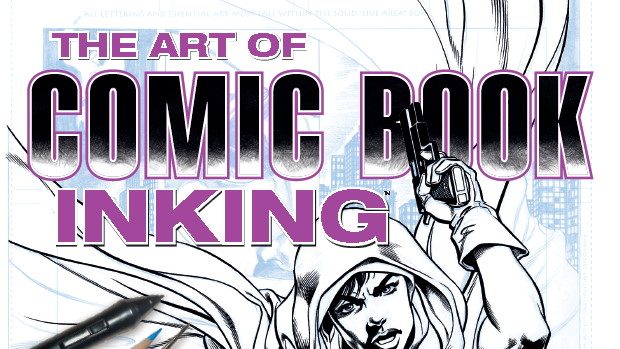 Summary: Learn not just what an inker does... but how they do it, then learn to do it yourself.

In the movie Chasing Amy, Kevin Smith has someone mock one of his characters as a “tracer”… that character was an inker and no doubt when fellow inkers saw that scene, they knew his pain. The Art Of Comic Book Inking goes a long way to explaining how there is far more to Inking than just the appearance of “tracing” the pencilers art and in doing so it shows just how much skill and talent goes into this oft overlooked aspect of comic art.

The instructional writing is easy to follow and makes a lot of sense. Giving the context and explaining not just where inking fits into the larger scheme of comic art but also the hows and the whys of it all is both fascinating and informative. The explanations for how each visual effect is created help give the reader greater appreciation for what is involved whilst also helping budding artists understand better how to achieve some of the looks they have no doubt admired but been mystified about how to achieve.

The artwork presented here is perhaps the best example of just how much work an Inker does and how much of an impact it has on the final product. By showing the pencilled version of images and then showing not just one but often multiple options for how the Inker can come in and apply their craft we get a much better idea for exactly what is involved and how much of an impact it can make. Showing both the “right” and “wrong” way to apply the skills also makes it clear that what might seem simple can in fact be quite complex and involve a lot of time and practice.

I can say that even from just a first look through The Art Of Comic Book Inking, I have already improved my own art… I know this because when I drew the face in my son’s reader book last night it said to me “how…. how….. how did you make that look so good?” The answer was that I had used some of the shading techniques shown in this book. For budding professional (or just hobbyist) artists, the addition of the practice pages is a great addition. It’s one thing to read about how to do something… it’s quite another to do it and not everyone has access to someone who can provide them with pencils to work with, that alone may well make this worth the asking price.  For anyone else who is just curious about the steps involved in bringing comics to life… this is a great read and really helps to fill in the blanks on one of the lesser talked about or respected aspects of comic art.